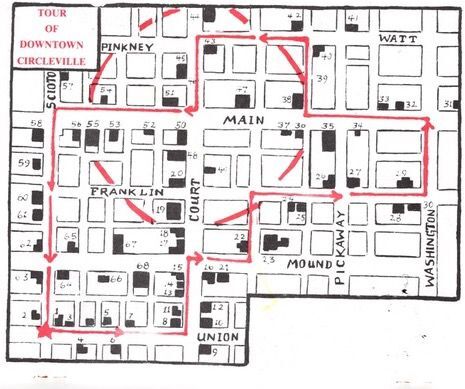 Walking around our town in the fall can be an opportunity to see the historic places Circleville has to offer. Last week, we started our walk. This week, we can start at the Griswold House located at 145 East Main Street.

This home was probably built by Johnson Hunter before 1818. It is believed to be the oldest house still standing in Circleville. Across the street is the Noecker Building, now occupied by R and M Tires at 150 East Main. This began as the Central Presbyterian Church (around 1855). The building once marked the east edge of Circle Street.

Circle Street crossed North Court where the Historical and Genealogical Library now stands. This building was the former site of The Circleville Herald, and is located at 210 North Court Street.

Peck’s Hall (1856) stands on the southwest corner of Court and Main Streets. This building was a part of the social life of Circleville and saw plays, military drills, basketball and skating and much more. It was the home of Murphy’s for many years. This lot began the squaring of the last quarter of the Circle.

The Olds Building or Old Masonic Hall at 115-119 West Main Street was built in 1839. It marked the western edge of the Circle. On down the street at 135 West Main, the Marfield Bank was built while the southwest quarter of the Circle was still intact. It houses the Ted Lewis Museum and ArtsaRound. The back of the museum tapers to conform to the Circle.

At 132 West Main, Ben Friedman opened his first store here and his son, Ted Lewis, was born in the second floor flat on June 6, 1890. This is known as the Parrett Building.

Tour books are available at the Historical and Genealogical Library — stop by and get one and take a walk around our historic Round Town.