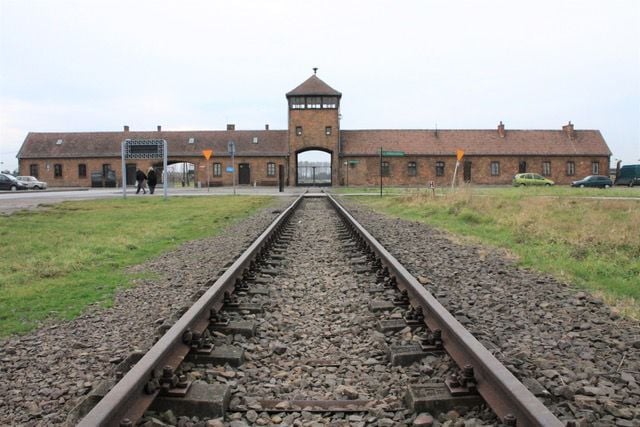 The first view of Auschwitz II-Birkenau to most deportees: the Gate of Death 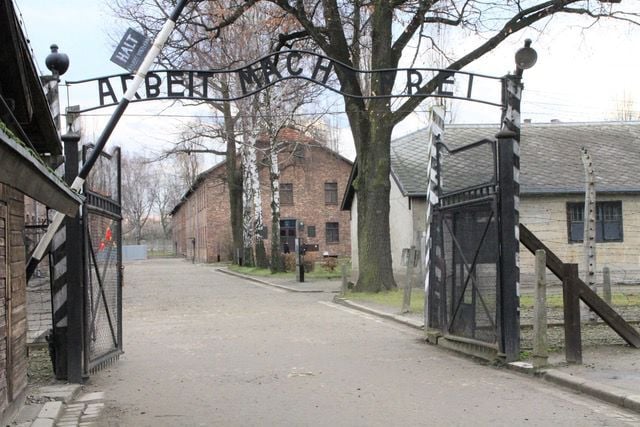 The Arbeit Macht Frei sign at Auschwitz I, made by prisoner-laborers, features an upside-down B, an act of defiance by the prisoners who made it.

The first view of Auschwitz II-Birkenau to most deportees: the Gate of Death

The Arbeit Macht Frei sign at Auschwitz I, made by prisoner-laborers, features an upside-down B, an act of defiance by the prisoners who made it.

It was raining at Auschwitz. Not a hard rain, just a dreary drizzle, fitting for a concentration camp.

Why were they called “concentration” camps? That has always puzzled me. Why such a bland, neutral phrase to describe such a horrible place? These were work camps, prison camps, and yes, even death camps, so why were they known as concentration camps? Perhaps because when human beings (or animals) are concentrated in one place, they are easier to control. Also, concentrated human beings become somewhat homogenized; they lose their identities and cease to exist as individuals.

Oswiecim, Poland (Auschwitz in German) was chosen for the largest Nazi concentration camp for several reasons: the Polish Army had abandoned barracks there, there was plenty of work to do in the heart of Poland’s rich-in-natural-resources industrial area, Oswiecim was a transportation hub (crucial for the many transports of political prisoners, prisoners or war, and other “undesirables”), and because the extensive site offered space for measures requiring privacy and isolation. Although Auschwitz was planned as a camp for political prisoners, once the logistics for mass gassing and mass cremation were figured out, Auschwitz became the epicenter of the Final Solution of the Jewish Question.

Our tour began at the larger camp, Auschwitz II-Birkenau. The first thing we saw as we pulled in was the infamous “Gate of Death.” This entrance is where trains full of deportees entered the camp. Just beyond the gate, the “selection” was carried out. It was generally a physician who indicated by the direction of his thumb who lived and who died. Those fit for labor (mostly men) headed right; the majority (children, women with children, pregnant women, the elderly, the sick) headed left — toward the gas chambers.

It is estimated that of the six million Jews who did not survive the Holocaust, 1.1 million of them died at Auschwitz. One of them was the father of a member of our tour group.

Our guide, Jaroslaw, looked the part. With his shaved head, sunken cheeks, gaunt body and somber manner, he resembled photos we had seen of concentration camp survivors. He did not dramatize the events of Auschwitz, but spoke in simple words and brief sentences. This was not a memorized speech for him; he told the story as if he were delivering it for the first time.

He took us to several wooden barracks in the men’s camp. The drafty buildings, heated only by a chimney at each end, were quite chilly on this November day. The rows and rows of bunks and the line of “latrines” testified to the hundreds who were packed together. Jaroslaw explained that there were strict time limits for latrine use, as for everything else. We could only imagine the bleak nights spent here.

You will not find a gas chamber or crematorium at Birkenau. At the end of 1944, the fleeing Nazis destroyed them along with other buildings and camp records in an effort to eradicate evidence of their crimes. They also removed all of the remaining prisoners capable of walking and herded them toward Germany on one of the infamous death marches.

We had to pass under Auschwitz I’s notorious Arbeit Macht Frei (Work Sets You Free) sign to enter the main camp. Auschwitz is not the only camp with this message; we had seen it previously at Dachau and would see it again at Theresienstadt. Nevertheless, it is a chilling greeting.

What I remember most about Auschwitz I are the piles. Those unfortunates sent to Auschwitz had everything taken from them. We saw huge, room-sized piles of labeled suitcases, kitchen implements, brushes of all kinds, shoe polish, and the more personal piles: shoes (including a heart-breaking mound of children’s shoes), eyeglasses, prosthetics, hair.

We also saw barracks (brick here instead of the flimsy wooden ones at Auschwitz II-Birkenau) and prison cells. In Block 11, the Death Block, we gasped at the standing cells. Four prisoners were crammed into each 1-square-yard cell where they had to stand. There was a two-inch opening for air. They only spent the night there; they had to go to work in the morning.

The gas chamber and crematorium at Auschwitz I were rarely used after the larger installations at Auschwitz II-Birkenau were built. Just outside this block building is the scaffolding where they hanged Rudolf Höss (pronounced Hess), the first commandant of Auschwitz, on April 16, 1947, after he was tried and sentenced to death for his war crimes.

Auschwitz was liberated by the Russians on Jan. 27, 1945. Only those prisoners too ill to walk remained.

Our silent group exited through the double row of electrified barbed wire fencing to return to comfortable, mundane activities.

It was raining at Auschwitz. Inside and out.

Continued next month at the Theresienstadt concentration camp.