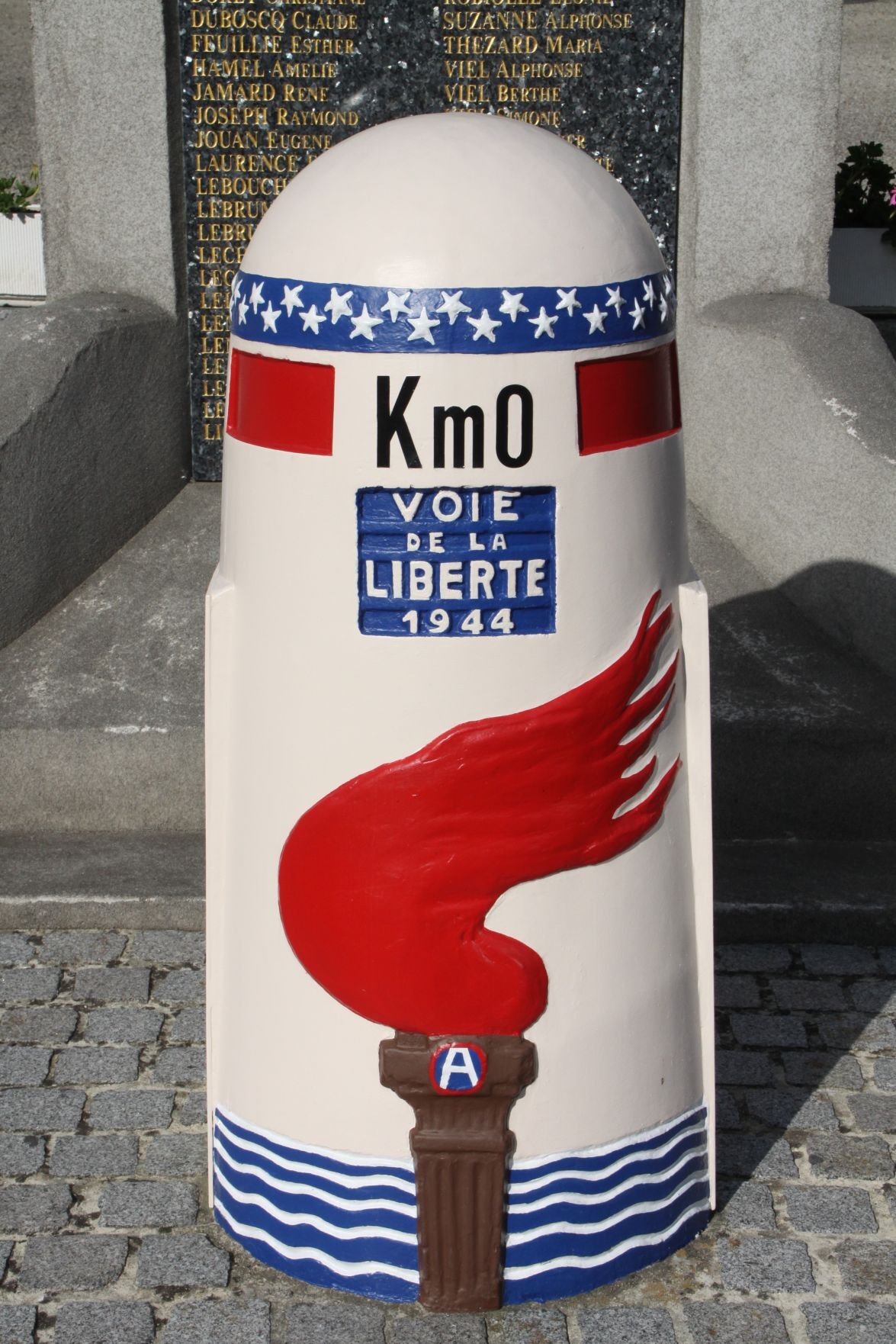 0 kilometer marker in Sainte-Mère-Eglise. On each marker are 48 white stars along a blue band, indicating the 48 states that made up the United States at the time. Also, across the blue waves of the ocean, a bright red torch from the Statue of Liberty with the flame blowing eastward toward France. 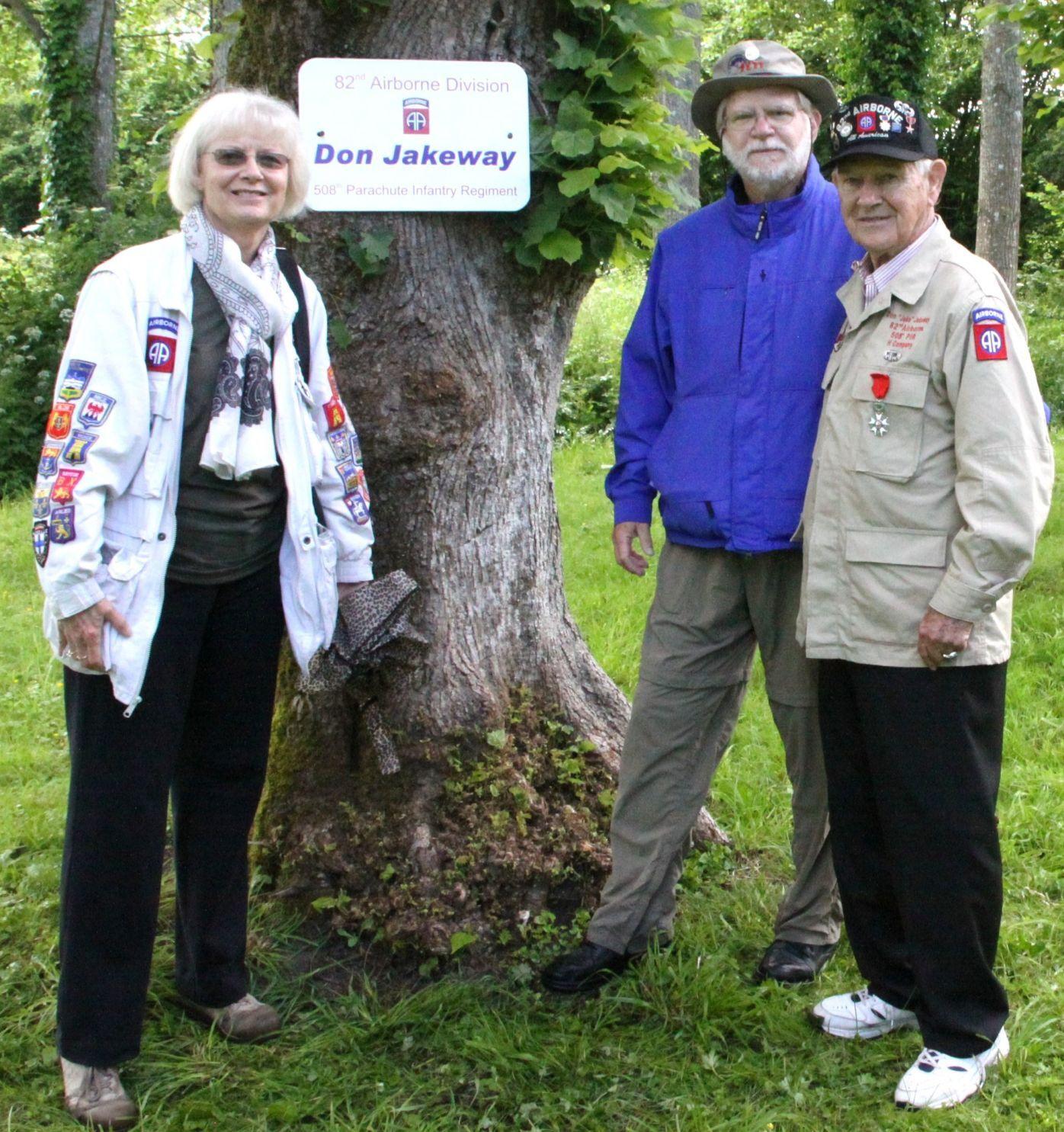 Paula and David Prindle with Don “Jake” Jakeway at the tree where he landed and was roped in by his parachute cords.

0 kilometer marker in Sainte-Mère-Eglise. On each marker are 48 white stars along a blue band, indicating the 48 states that made up the United States at the time. Also, across the blue waves of the ocean, a bright red torch from the Statue of Liberty with the flame blowing eastward toward France.

Paula and David Prindle with Don “Jake” Jakeway at the tree where he landed and was roped in by his parachute cords.

Our favorite day in Normandy was when we got to follow Don Jakeway’s footsteps from his landing tree to sites where he fought with his unit once he caught up with them. For the first three days, Jake was on his own, hiding from Germans and searching for any American troops. He joined a unit of the 101st Airborne for a week until he was reunited with his unit on D+10 (ten days after D-Day).

Following in his footsteps was amazing. Jake’s stories seemed so much more real in situ. He showed us the tree that he thinks he landed in about about midnight on D-Day (now marked by a sign with his name on it), then waved in the general direction of the fresh cow pie he slid into after jumping a hedgerow to elude advancing German footsteps.

Later came somber reflections; he’d point to a distant hedgerow and say, “That’s where I headed when we realized the field was mined.” Then he indicated the tree-line where the Hitler youth were waiting to pick them off one by one. Jake lost seven friends at Hill 95, our final stop of the day.

Three other veterans from Jake’s 508th Parachute Infantry Regiment were with us that day; they also spoke at the battle sites. What an honor it was to view history through the eyes of the history-makers. We met many other veterans, including a German POW. Sadly, one of our favorites, Jack Schlegel, died the day after returning home. That certainly made us reflect on how we are losing our Greatest Generation every day.

The Sunday after D-Day we watched over 600 international paratroopers land in a field next to the bridge at La Fière, where many paratroopers landed on the night of June 5-6, 1944. This bridge was one of only two over the flooded Merderet River, so taking it and holding it were primary missions of the 82nd Airborne.

Parachute jumps are scheduled every year for the D-Day festivities, but they are canceled when, as in 1944, Mother Nature does not provide conditions conducive to successful jumps. We were lucky; the day was sunny, the sky was blue, there was little wind. It was a perfect day for a parachute jump.

Our last evening was a warm, wonderful, fitting farewell to this journey back in time. We dined that night at the home of Henri-Jean and Yvette Renaud. Henri-Jean Renaud is the vice-president of the Airborne Museum, and the son of Sainte-Mère-Eglise’s wartime mayor, Alexandre Renaud, and his wife, Simone. A 2010 documentary, Mother of Normandy, tells the story of Simone Renaud, who, after seeing the loss of life on D-Day, spent the rest of her life doing her best to heal American families who lost their sons and husbands in Normandy.

She took care of many graves at the three temporary cemeteries in Sainte-Mère-Eglise, decorating them and sending photos of them to their families. After the establishment of the permanent Normandy-American cemetery in Colleville-sur-Mer (30 miles away), she continued to care for graves. She corresponded with American families for 44 years, often hosting them in her home during their visits to Normandy.

Her three sons have kept up the correspondence and the hosting since her death in 1988. Son Henri-Jean and his wife hosted our veterans, Jake and Zerg, during our D-Day stay. Spending our last moments in Normandy in their company was a lovely way to end an emotion-filled historical adventure.

Sadly, we lost our dear friend, Don Jakeway, last November, six weeks before his 97th birthday. He was one of the last D-Day survivors, one of the last heroes of the Greatest Generation. We miss him.

Here are my favorite tips for visiting Normandy.

• Come during an off year. You will reap all the benefits without all the drawbacks.

• Watch The Longest Day. Sure, it’s Hollywood, and not historically correct on every point, but it will enrich your knowledge of Sainte-Mère-Eglise and the airborne troops, the scaling of the Pointe du Hoc, the landings on all five Normandy beaches (Utah, Omaha, Gold, Juno, Sword), as well as the German point of view.

Most American visitors to Normandy see only the area around Omaha Beach, but the region around Sainte-Mère-Eglise is a better, more central location for visiting much of Normandy. Utah Beach is next door. To the east, the American Cemetery above Omaha Beach is 35 minutes away, Bayeux and its famous tapestry are 41 minutes, and Caen is 1 hour away. To the north, Cherbourg can be reached in 35 minutes, to the south, St. Lô in 38, and even the Mont St. Michel takes less than an hour and a half. Location, location, location.

Check out all that Sainte-Mère-Eglise itself has to offer. The Airborne Museum is one of the finest in the world, and it has a terrific gift shop; be sure to pick up a cricket. The newly-dedicated wing’s sensation-filled journey makes you feel like you are parachuting into Sainte-Mère-Eglise on the night of June 5-6.

In addition to admiring the exterior of the village church with its mannequin of John Steele hanging from the spire, go inside to see the two magnificent stained glass windows in parachute motif. The Town Hall has the 0 Kilometer marker, signifying that Sainte-Mère-Eglise was the first town liberated in France on D-Day. Twelve hundred mileage markers just like it marks the Route of Liberty all the way across northern France following the approximate path of General Patton’s 3rd Army to Bastogne, Belgium.

The town’s main square and Rue Eisenhower are chock full of monuments, shops and cafés. If you, or your kids, begin to tire of WWII sites, the open-air Musée de la Ferme (farm museum) is a good change of pace. So is the cookie factory. Be sure to sample the parachute-shaped shortbread cookies.

Around Sainte-Mère-Eglise you will find Dead Man’s Corner, La Fière bridge, the German coastal defenses which formed part of Hitler’s Atlantic Wall, the stark German cemeteries. We also enjoyed the Hangar à Dirigeables (blimp hangar complete with a blimp) because my father was a WWII blimp pilot.

You will love Normandy.

Paula Prindle wrote and submitted this travel column to be published in The Circleville Herald. David Prindle is the photographer. This is Part III of a series on D-Day.