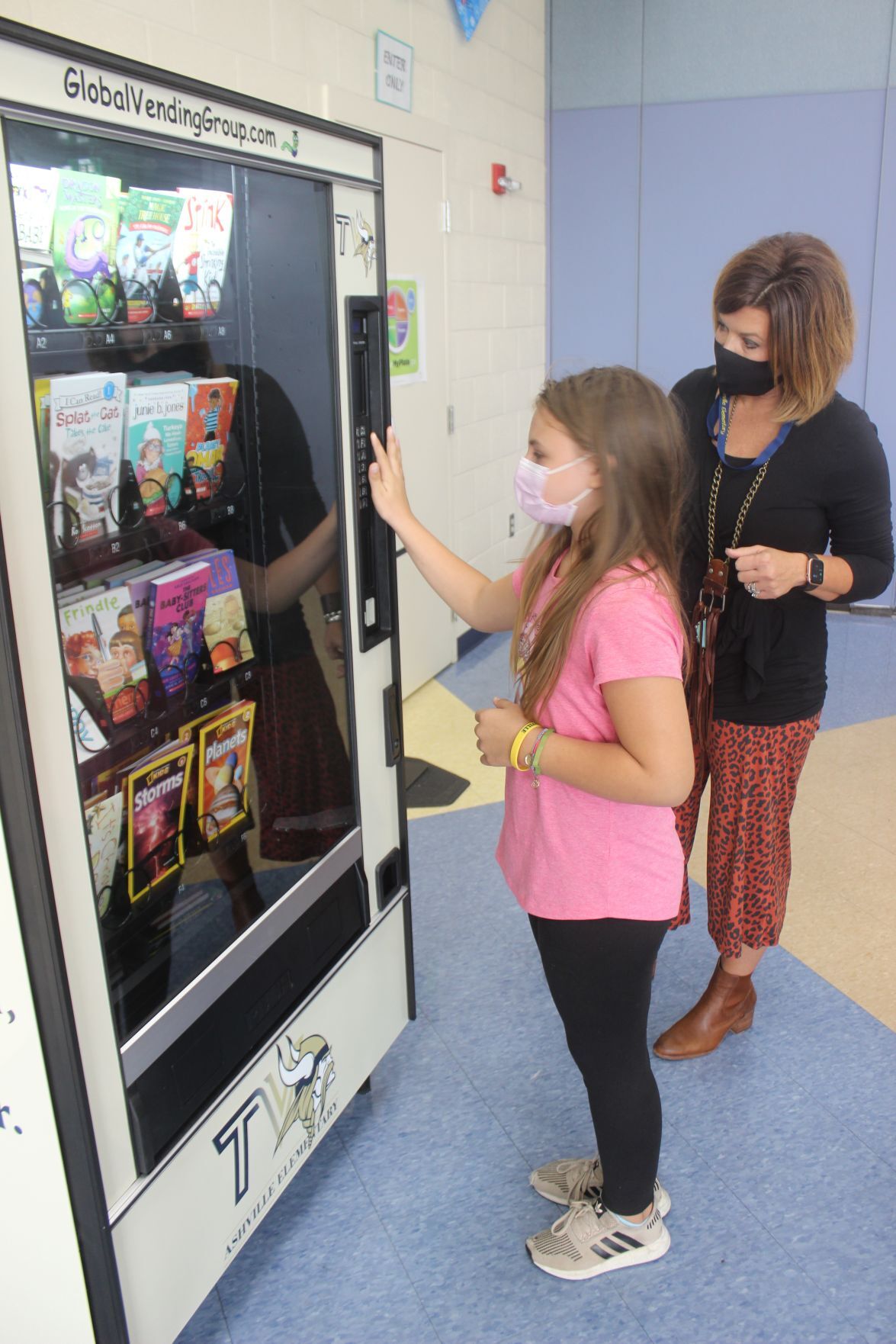 Kyleigh Jencson, a student at Ashville Elementary, makes a selection at the book vending machine in the cafeteria. 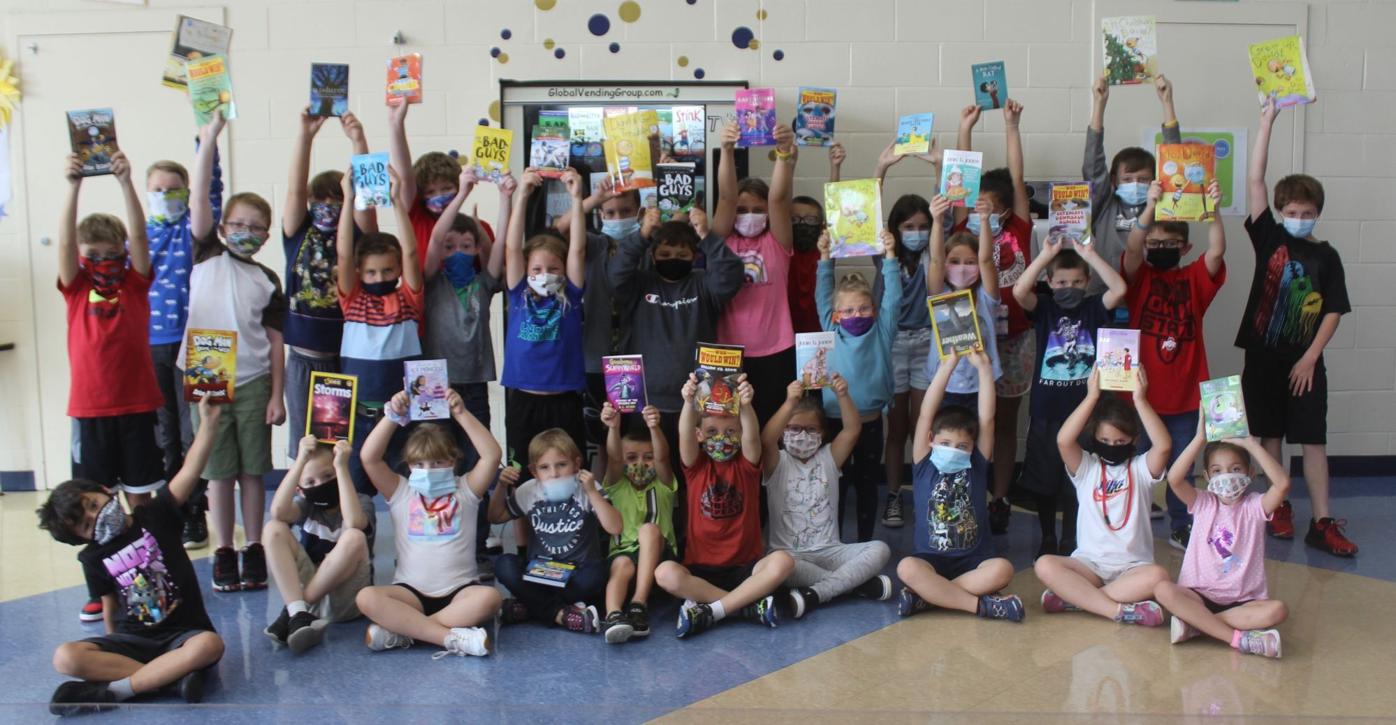 Students from Ashville Elementary display their books that they picked up from the book vending machine, earned by having a positive moment with a staff member from the school.

Kyleigh Jencson, a student at Ashville Elementary, makes a selection at the book vending machine in the cafeteria.

Students from Ashville Elementary display their books that they picked up from the book vending machine, earned by having a positive moment with a staff member from the school.

ASHVILLE — Students at Ashville Elementary who embody the mission of the school are now rewarded with a golden moment and a book, courtesy of the Teays Valley Education Foundation and the Parent Teacher Organization at the school.

Kaitlynn Peters, second-grade teacher, said she got the idea for the book vending machine from social media.

“I happened upon the idea and thought, ‘what a great way to get books in the hands of kids and give them something to work for,’” she said.

“Another school district had done it and looking at it, there are tons of schools in New York that do it; that’s where the vending machine comes from. We just want to do things to get the kids excited.”

Among the choices include books from R.L. Stine’s “Goosebumps” series; “Holes,” by Louis Sachar; the “Junie B. Jones” book series, by Barbara Park; “The Babysitter’s Club” book series by Ann M. Marin; “Who Would Win?” series; and books from National Geographic Kids.

“We try to give a nice variety of books from pre-k through fifth grade with good-quality books they’re interested in,” Peters said.

“We have students who may not always do the right thing, but we have a positive moment with them and we can spontaneously recognize them for desired behavior,” Principal Gretchen Weiler said.

The school’s motto is “be respectful, be kind, be responsible, be a world changer,” which is what the book program incentivizes.

“We can do our best everyday, as a team, as students — that’s all we can do,” Weiler added.

“Some days are going to be better than others and kids have rough days, just like adults do, so this is an opportunity for a spontaneous moment, to have a moment that they’re feeling good and the staff member feels good and they get a book to take home that’s theirs.”

The program works as each staff member gives a gold coin to a student who then reports to the cafeteria where Principal Weiler helps the students use the vending machine and pick out their books.

“In working on how to promote literacy and to get books in kids’ hands and tying it into our PBIS and our motto and initiatives, we’ve come up with something similar to the golden buzzer on ‘America’s Got Talent,’” Weiler said.

“We’ll randomly go over the announcements and say that it’s time for a golden moment.”

Staff members then present a gold token to a student they’ve had that positive moment with, which can then be redeemed for a book.

“It doesn’t have to be someone from the classroom, it can be from anywhere,” she said. “Our custodians, anyone in the office can nominate someone, and they think about someone from that day to nominate who can then come down and choose a book. They’re never going to know when it’s going to happen.”

Weiler said it can be anything that a staff member notices, from a small interaction in the hallway to extra effort in the classroom, to a conversation between students.

“It’s a way to recognize all areas of our building and our initiatives and make sure the behaviors are recognized to make Ashville what it is, full of world changers,” she said.

PBIS goes beyond the book program, as they reward behaviors in three other tiers.

“Students earn dojo points in the classroom for desired behaviors. They are awarded golden dojos and get their picture taken and a gold slip when they change the world, and then the tier-three award is the thumbs up award and that’s for the student who tries really hard all the time,” she said.

Weiler said at the start of the year, staff created videos to help promote positive behavior by demonstrating dos and don’ts on a number of subjects, such as proper behavior in the hallway. Students spend a few minutes each day at the start of the day connecting with themselves and their teachers in an effort to promote good mental and emotional health.

“Students come in and spend the first 15 to 20 minutes checking in with their teacher, talking about what zone they may be in and doing some team building activities to come in and get reset before you start your day,” Weiler said.

“It’s hard for any adult or student to deal with disappointment or challenges and we use PBIS to have a discussion so our language can be universal,” Weiler said.

“We often talk about the size of your reaction is not the same size as your problem. We often use a golf-ball size problem and a beach ball-size reaction. We often refer to our zones of being in a red zone or blue zone so students can recognize their feelings so they can regulate those in order to have a good day and feel good about being here and learning.”

Weiler said it takes a special team like the one at Ashville to make their program and their idea with the books work.

“This is a hardworking crew and there’s nothing else I’d rather do,” she said. “I appreciate the effort of the team here and our students for how hard they work.”