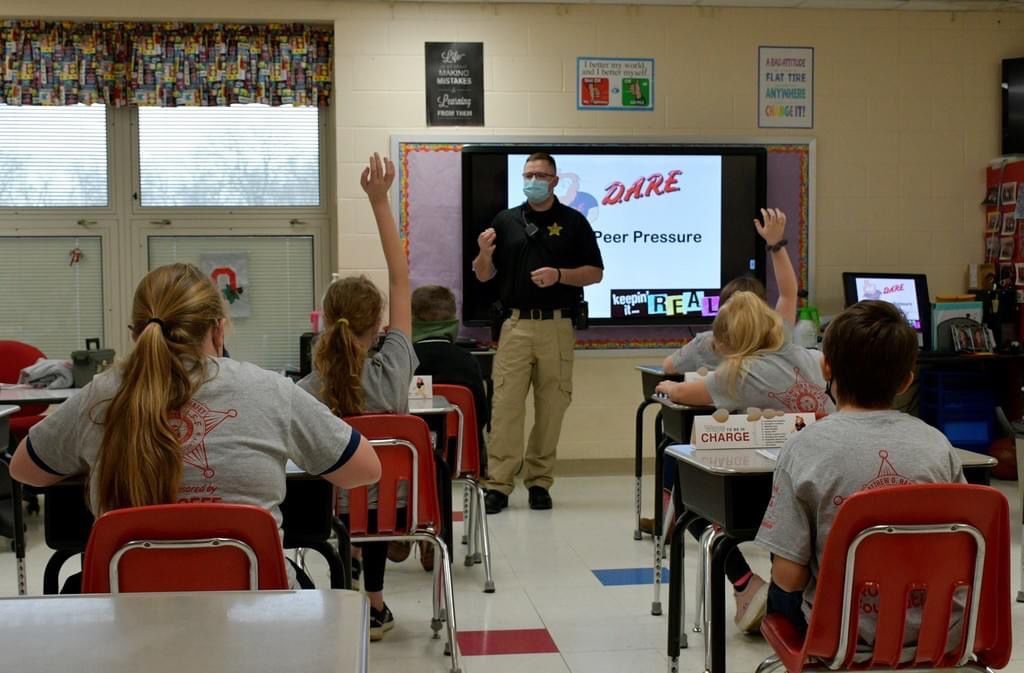 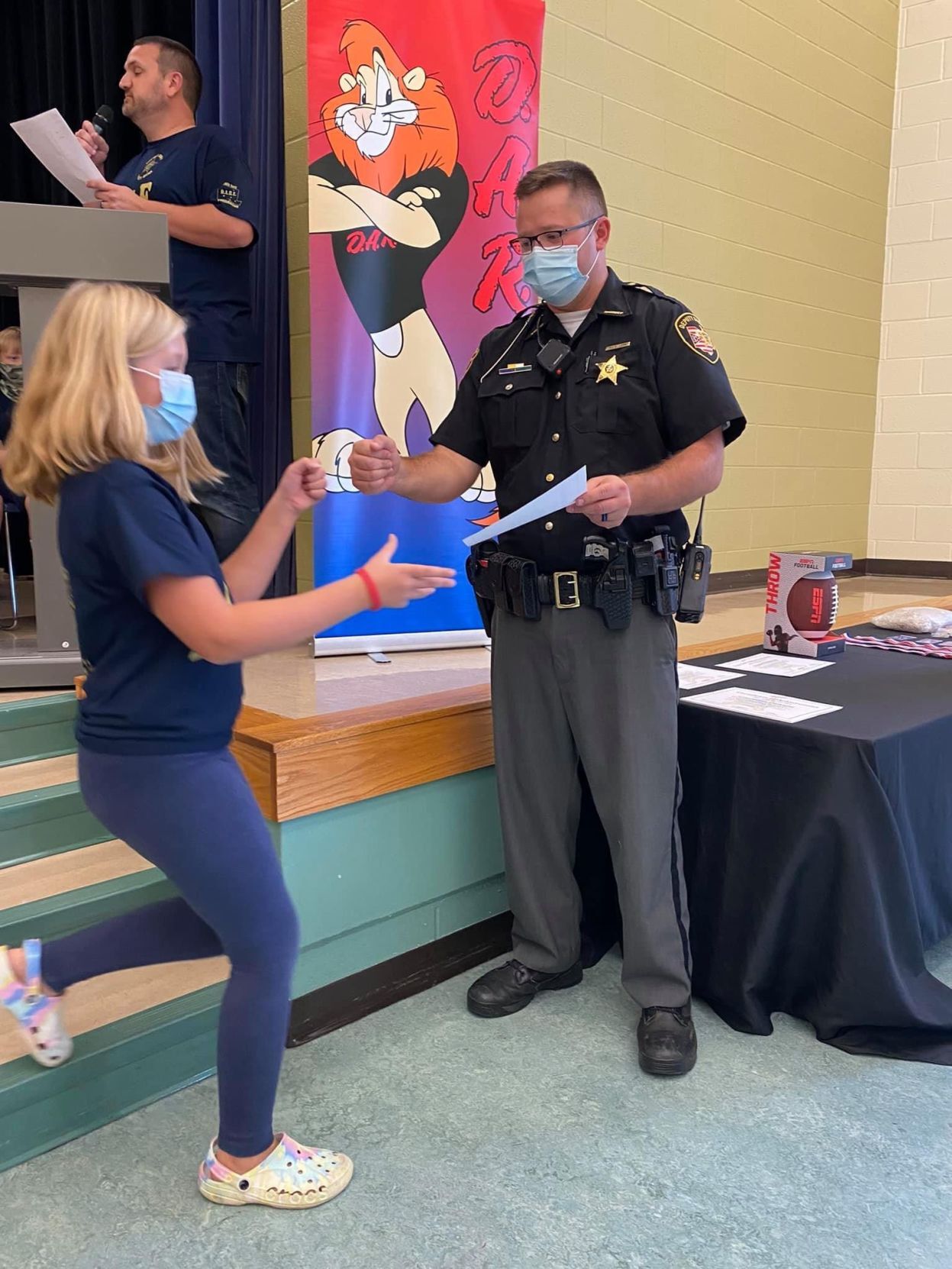 Deputy Pete Bowers awards one with a certificate and a fist bump in his D.A.R.E. program.

Deputy Pete Bowers awards one with a certificate and a fist bump in his D.A.R.E. program.

CIRCLEVILLE — For Pickaway County students this year, they’ll have a new D.A.R.E. instructor as Deputy Pete Bowers now has taken on the program following the retirement of Sargent Dale Thomas last year.

Bowers previously was a school resource officer at Westfall and then Teays Valley before becoming the D.A.R.E. officer.

“I knew that I wanted to be more involved with the kids,” he said. “When Sgt. Thomas decided he was going to retire, I had been through his D.A.R.E. class and I saw the involvement he was able to have and the kids he impacted; I knew it was something I wanted to pursue.”

Bowers said he wanted to work with youth after a call early on in his career involving a youth who had a knife.

“The parents were more worried about him hurting someone else,” he said. “He was a really distraught kid and when I got to the house, he didn’t want to do much with me.

I was able to bring him outside the house and talk one-on-one about the situation. Through talking with him, I was able to break through some barriers and learn he wasn’t going to use the knife on anyone else but on himself. We were eventually able to get him the help that night and from then on, that’s what I decided I wanted to do.

A couple weeks after, mom called and said I was able to save his life and that was what got me started in working with kids,” he said.

Bowers aid he approached Sheriff Matthew Hafey before he took office to throw his name in the ring for the job. He went to training in Mississippi and it was the first time he’d left his family since having kids.

“It was two and a half weeks and I completed the D.A.R.E. training down there,” he said. “There wasn’t one closer and if we didn’t move quickly, we wouldn’t have had it for a year.”

Bowers said D.A.R.E., which stands for Drug Abuse Resistance Education, has changed from the “Just Say No” campaign.

“It’s the common misconception that it’s all about tobacco and alcohol resistance,” he said.

“People say it’s not scientifically based and it’s all about those things. It’s so much more than that. It’s about dealing with stress, now and in the time of COVID, we’ve got broken homes and way more than what I dealt with in school. It’s dealing with peer pressure, bullying and effective communication. There are a lot of things encompassed to get the students to the next stage of life and to the ‘real world.’”

Bowers said his daily goal is to leave a positive impact on the children he works with.

“If I can leave that room making a positive impact on at least one kid, it’s worth it,” he said. “We see it. We see positive things. There are people who don’t agree with the program, but it makes it worth it to see them grow.”

As an example, Bowers said that one young lady in the program had a tough time and to see her improve was enough evidence for him in the power of the program.

“I saw a change in her toward the end and she was picked as one of the Ruth Neff Outstanding Student Awards,” he said.

“She came up to me at the end and was crying saying that the program changed her life, she had a terrible perspective of law enforcement and now we showed her that we cared. That’s the part of D.A.R.E. that bridges the gap between law enforcement and the community that we need now more than ever.”

Bowers said it comes down to giving the students the information and tools and letting them make responsible decisions.

“When you’ve got kids telling you the program has helped them make good decisions and stay away from something, it’s good,” he said. “Unfortunately, we’re seeing it younger and younger and we have parents buying vapes for their children.”

These days, the program is a nine-week course with multiple days a week in the schools, mostly in the elementary and middle-school levels.

“There’s also a high school program and maybe by the time I’ve got as many years as Sgt. Thomas had, we can implement that,” he said. “Once we get the base in place, we can hopefully hit the junior high in all the districts and the high schools. That’s my end goal, but it’s not for me to say that’s going to happen.”

Bowers said the job has been everything he thought it would be so far.

“It’s been really rewarding,” he said. “On top of teaching, I’m involved in all the community events that we’re having.”

As such, Bowers has also shifted fundraising. This year, they did not have a booth at the Pumpkin Show, due to how little they would make with rising costs on bottled soda.

“When I came in, I reached out to local businesses and told them what we do, how we make an impact and asked if they would make a donation to the Ruth Neff Fund to support the program,” he said.

“We used some of that money for the things we give out for the Pumpkin Show. This gives me more time to mingle with the community instead of being confined to the coke booth.”

Bowers said he ultimately wants to grow the program and not change it too much as the third-ever D.A.R.E. officer in Pickaway County.

“Those two with Ruth Neff; if it wasn’t for them, I don’t think I’d be in the position that I was in.”