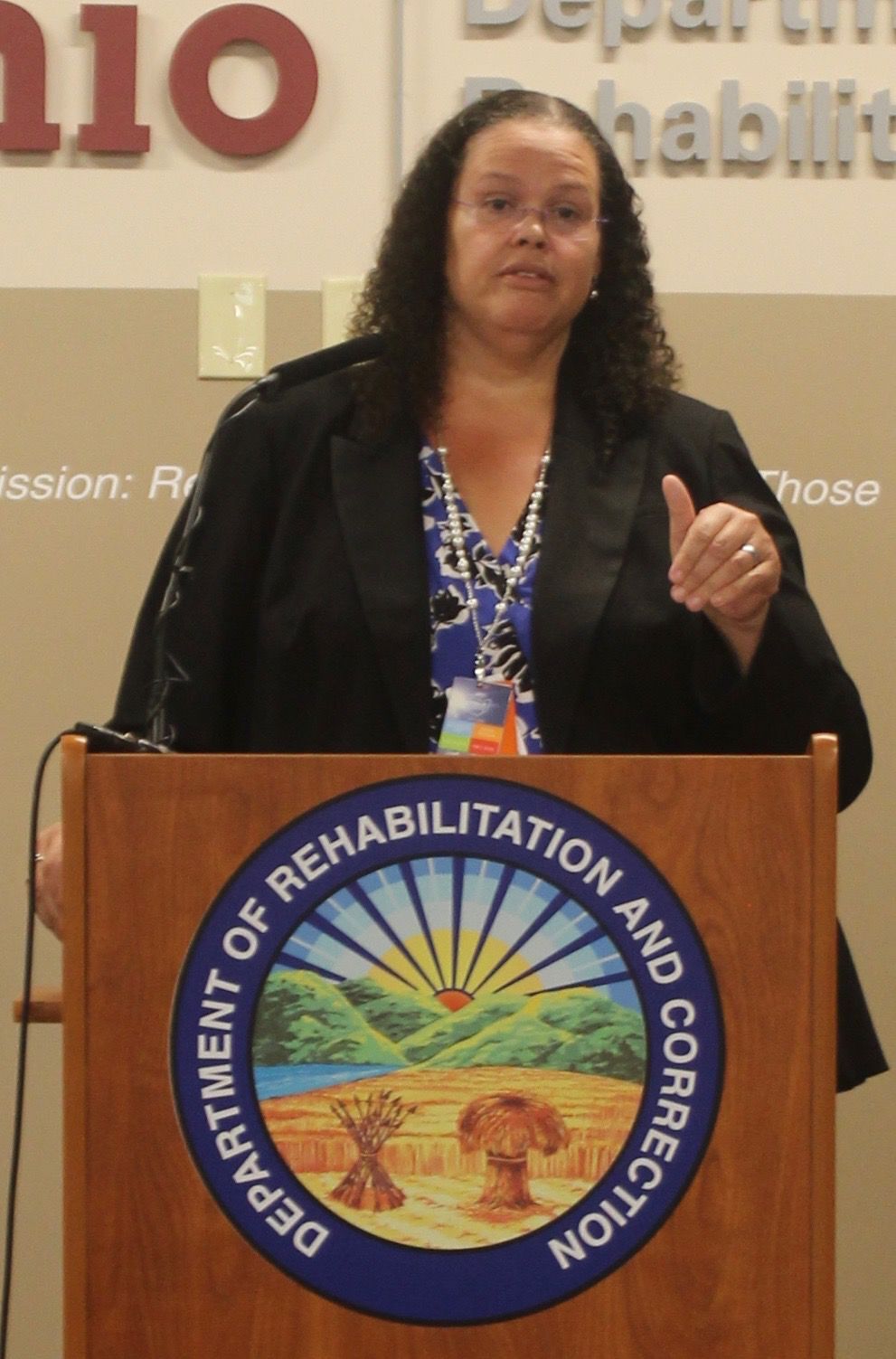 Annette Chambers-Smith, Ohio Department of Rehabilitation and Correction Director, spoke to the media following a 30-minute vide presentation on the death of Michael McDaniel at the Correctional Reception Center in Orient. McDaniel died on Feb. 6. 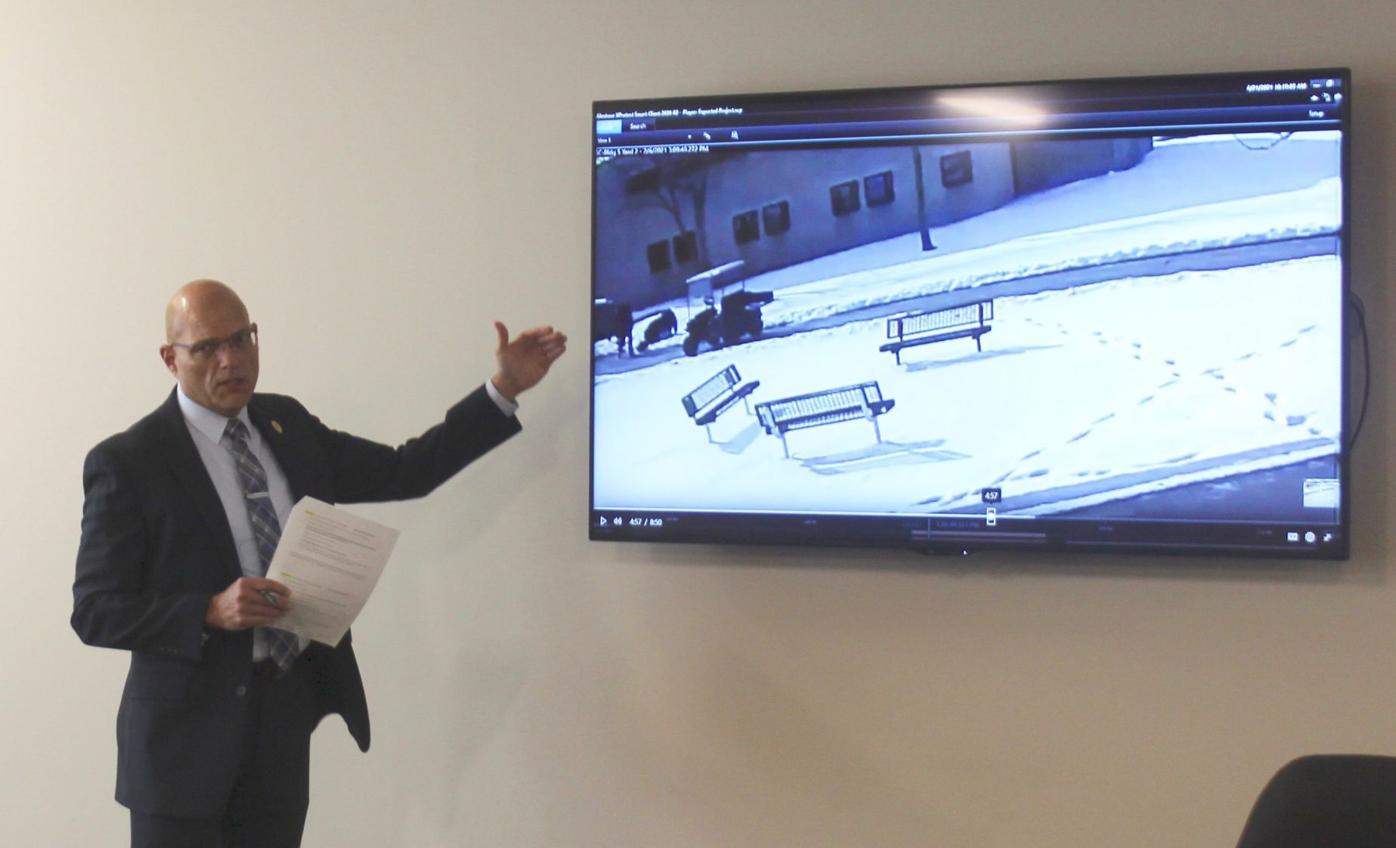 Chris Lamber, chief inspector, reviewed the video footage during the events that led up to the death of Michael McDaniel while in Ohio Department of Rehabilitation and Correction’s custody.

Annette Chambers-Smith, Ohio Department of Rehabilitation and Correction Director, spoke to the media following a 30-minute vide presentation on the death of Michael McDaniel at the Correctional Reception Center in Orient. McDaniel died on Feb. 6.

Chris Lamber, chief inspector, reviewed the video footage during the events that led up to the death of Michael McDaniel while in Ohio Department of Rehabilitation and Correction’s custody.

ORIENT — Eight Ohio Department of Rehabilitation and Correction employees at the Correctional Reception Center in Orient have been recommended for disciplinary action and two have resigned following the death of an inmate earlier this year.

Michael McDaniel, 55, died on Feb. 6 after two guards removed him from his cell for a random search and he was combative with them.

According to the report provided by the Ohio Department of Rehabilitation and Correction, McDaniel was vulgar toward two officers at the facility who then removed him from his cell for a random cell check.

During that process of handcuffing him and removing him from the cell, a scuffle ensued and McDaniel and two officers hit the ground. At that time, more officers responded and McDaniel was placed in handcuffs and then lifted to his feet to be escorted to the medical facilities for an exam as part of protocol following a use-of-force incident.

During the walk to medical facility, McDaniel was forcefully taken to the ground three more times — each of these times determined to be excessive and not justified — and collapsed on his own 10 times on his way to the medical facility. He was forcibly moved from one bench inside the facility to the other and he collapsed on his own once more after leaving the exam room after about one minute.

Annette Chambers-Smith, Ohio Department of Rehabilitation and Correction Director, took questions from the media following the release of the report and security camera footage.

“I was appalled,” Chambers-Smith said after seeing the footage and the report. “That’s not what we train people to do, it’s not what policy says, but it’s what happened. Not everyone is suited to correctional work and those that are not suited need to be removed.”

The report listed six different use-of-force incidents and five of the six were declared excessive and not justified.

In the first use-of-force incident, the original scuffle, use of force was not excessive and justified, however, it was determined that the actions of the officers went against ODRC policy by removing McDaniel from his cell for a cell inspection during a recreation period and while he was belligerent.

“What that is, is officer-created jeopardy,” Cambers-Smith said. “At that point in time, the use of force wouldn’t have happened. When someone is angry and you know it ahead of time, opening the cell is not a wise choice. He wasn’t hurting himself, so there was no reason to open the door. When you’re having a verbal altercation, opening the door is not smart and that is part of the findings.”

The report concluded that officers Jerry Perkins, Jason Roberts, Heath Causey, Sarah Cline, Kristy Judd and Joey Lemaster, as well as Lt. Bruce Brown and LPN Jaime Dukes should face further disciplinary action and that no further action would be taken on nurse Vera Pokuaa and officer Paul Edwards since both had resigned their posts. Disciplinary actions include many options up to and including termination.

“We’ll schedule the pre-disciplinary hearings and get to the final decision making on what will happen in each of these cases,” she said. “The strongest disciplinary action is up to and including removal.”

The incident has been reported to the Ohio Board of Nursing because of the nature of the care McDaniel received at the facility.

“The nurse who provided care, after the incident and after Mr. McDaniel passed away, filled out a document that he was refusing medical care and we believe that is a false document and that’s why the nursing board is involved and why that nurse would have been put on administrative leave, but she no longer works for us.”

Chambers-Smith said Pickaway County Prosecutor Judy Wolford has received everything provided by the Ohio Department of Corrections for any potential criminal charges.

“The fact that someone was allowed to hit the ground 16 times is ridiculous,” she said. “There were golf carts available or other options, the nursing staff could have come to him. That is a lack of the scene supervisor making the appropriate decisions and there’s nothing about this that is okay.”

Chambers-Smith said she couldn’t comment on what punishment she wanted, but did take responsibility for McDaniel’s death.

“If I actually say what I think and it happens, they’ll say I have my decision made up before the pre-disciplinary hearing and get their job back,” she said. “I’m not going to tell you what I think, but when I sign off on it, you’ll know what I think.

We’re responsible for what happened in that video, there’s no question about it,” Chambers-Smith said.

Chambers-Smith said following the incident, they’ve made some changes at the CRC, including adding new cameras to eliminate blind spots of some cameras.

“The facility had 304 cameras in November and they now have 356,” she said. “It was all about going through and saying if there is somewhere I can’t see and use of force is likely to happen, we need to make sure we add cameras. It’s been completed at that facility and is being done at others.”

Another aspect was an increase in the amount of time they hold footage at the facility.

“Stationary cameras are variable from institution to institution and they only hold seven to 14 or 21 days worth of footage, so we’ve undertaken a process to increase that to 45 at every facility,” she said. “We want to make sure we have footage available if something would happen.”

In addition, this incident helped expedite the pilot program for body cameras for officers, which began in November, based on a ruling in California.

“California got ordered to put body-worn cameras in their prisons and that’s when it came to me and we started working on that,” she said. “I wouldn’t say [McDaniel’s death] was a catalyst, but I would say it sped it up.”