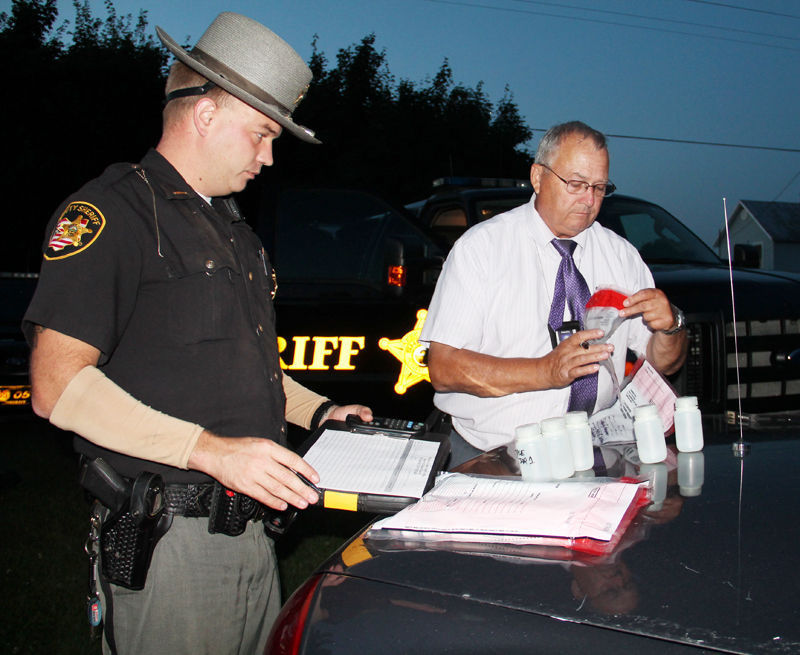 Emrick (right) in 2014 taking inventory of liquid methamphetamine found during a search of a property on Hayesville Road. Pictured with Emrick is then deputy, now Sgt. John Schleich. 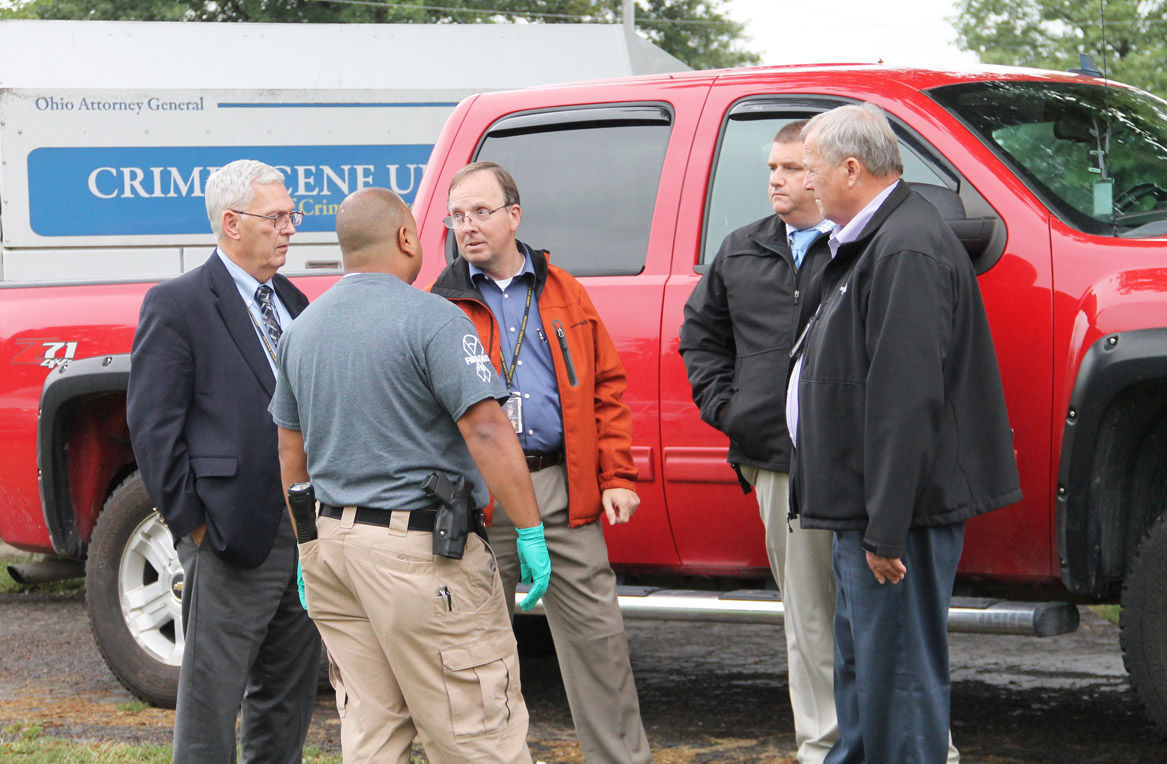 Emrick (far right) talks with other investigators during an investigation in 2017 outside a Tarlton Road home. 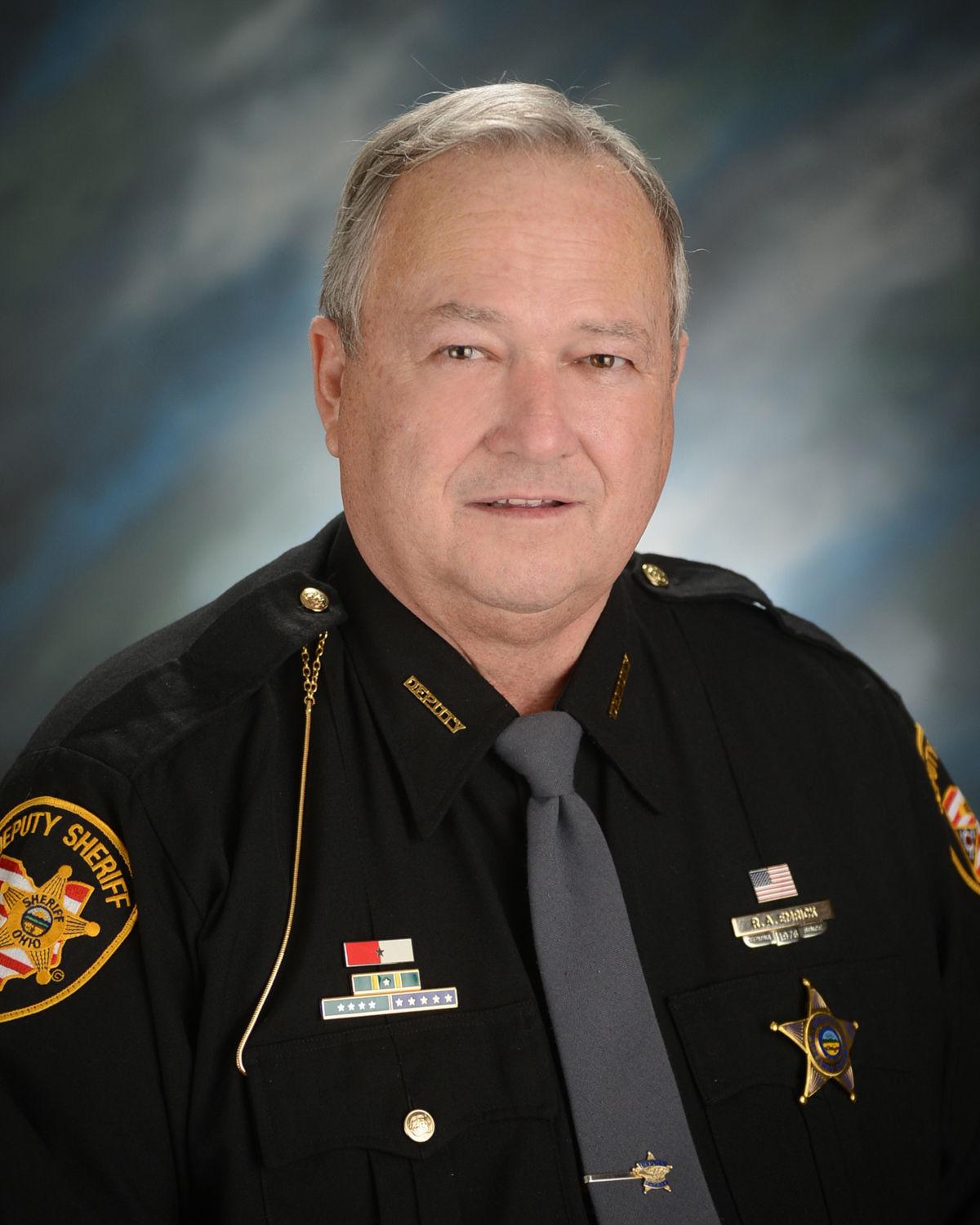 Emrick (right) in 2014 taking inventory of liquid methamphetamine found during a search of a property on Hayesville Road. Pictured with Emrick is then deputy, now Sgt. John Schleich.

Emrick (far right) talks with other investigators during an investigation in 2017 outside a Tarlton Road home.

CIRCLEVILLE — For the last 46 years, now detective Rex Emrick has served the people of Pickaway County in the Sheriff’s Office.

Thursday was Law Enforcement Officer Appreciation Day and The Circleville Herald spoke with officers about their job, life and everything in between.

Emrick began his career in 1974 with the Mt. Sterling Police Department before he was hired by then Sheriff Dwight Radcliff to work in the jail, do some undercover work before eventually making it to the radio room before becoming a road deputy. In 1994 he was promoted to the detective bureau where he’s worked ever since.

“I’ve had an enjoyable career here working for Dwight and Robert B. Radcliff,” Emrick told The Circleville Herald.

Emrick spoke, sharing the spotlight and highlighting the “team effort” of recent investigations including a murder near Ashville.

“It took all of us to bring these cases to a successful rest and some convictions,” he said. “I don’t feel that I’m anything special than anybody else. As a small department it takes everyone to make successful arrests.”

Radcliff said the thing that stands out to him about Emrick, is his dedication to the job and serving the people of Pickaway County, including spending the week of Christmas, including Christmas Day, working on a murder investigation.

“I could pick many people here that are deserving of recognition and do a great job every day,” Radcliff said. “But when you look at Rex his duty is to complete his work and serve his citizens. When we had that recent homicide, he came in here and made sure the loose ends were tied and everything was completed. That’s him, dedication to the job.”

Radcliff said sometimes those in the job like Emrick have to put their personal lives and families on the sidelines to solve a case.

“People just don’t realize what they do to take care of citizens,” he added. “He’s one of those that go above and beyond. The citizens are going to get their money’s worth when he’s out there because he works hard everyday.”

“We’ve worked very well together,” George said, citing a couple murder and robbery cases. “He’s very knowledgable, cooperative and helpful with Ashville, and we’ve continued to work together now that I’m the Chief. We had a murder a couple of years ago and we worked that whole case together, hand-in-hand.”

Emrick didn’t share a favorite part of the job but did say talking with people is something he enjoys doing.

“Sometimes I talk too much,” Emrick said, with a laugh. “I’ve enjoyed talking to people and helping people. It’s not all about arresting people. We have a very troubled society today. Law enforcement people do have to have compassion as well as protecting people.”

Emrick said the problem with the drugs is one example of that compassion.

“I think there are a lot of good people that have got themselves into a situation where they got addicted and it went downhill from there and were unable to get away from it,” he added. “It’s unbelievable the people we talk to in investigations, I would say a lot of the crime is due to addiction. It’s every day and it doesn’t make any difference if they’re rich, poor or in the middle.”

Emrick said one of the hardest parts of the job is handling cases involving parents where their children are either involved or a victim of a case.

“I think as you get older you get more sympathetic,” Emrick stated. “It’s hard to see parents who love their kids, their kids get in trouble and are arrested and the majority of the time it’s due to an addiction. I can’t give you the answer to correct that, because there are a lot of people smarter than I who have tried.”

“Children are pretty resistant to a lot of things,” he said. “Kids are able to rebound from these things better than the parents are. That’s a real tough part.”

Emrick said it’s hard to handle some of the more terrible things you see as a law enforcement officer especially since becoming a father and now grandfather.

“Once you have children and you drive up on an accident and see a child involved it’s more difficult,” Emrick commented. “You pull up and think that could be your child. You get to my age and then you think about grandkids.”

When he’s not working, Emrick said he tries to rest but he enjoys hunting.

“I like going deer hunting, we’re just at the end of the season now,” he said. “I enjoy being with my grandkids on the weekend, my wife and I have them quite a bit. This past summer I bought a pellet grill and I got into cooking on the weekends. It’s pretty easy to learn how to do it because there are a lot of experts on Facebook or YouTube telling you how to do it. You just have to pull it up.”