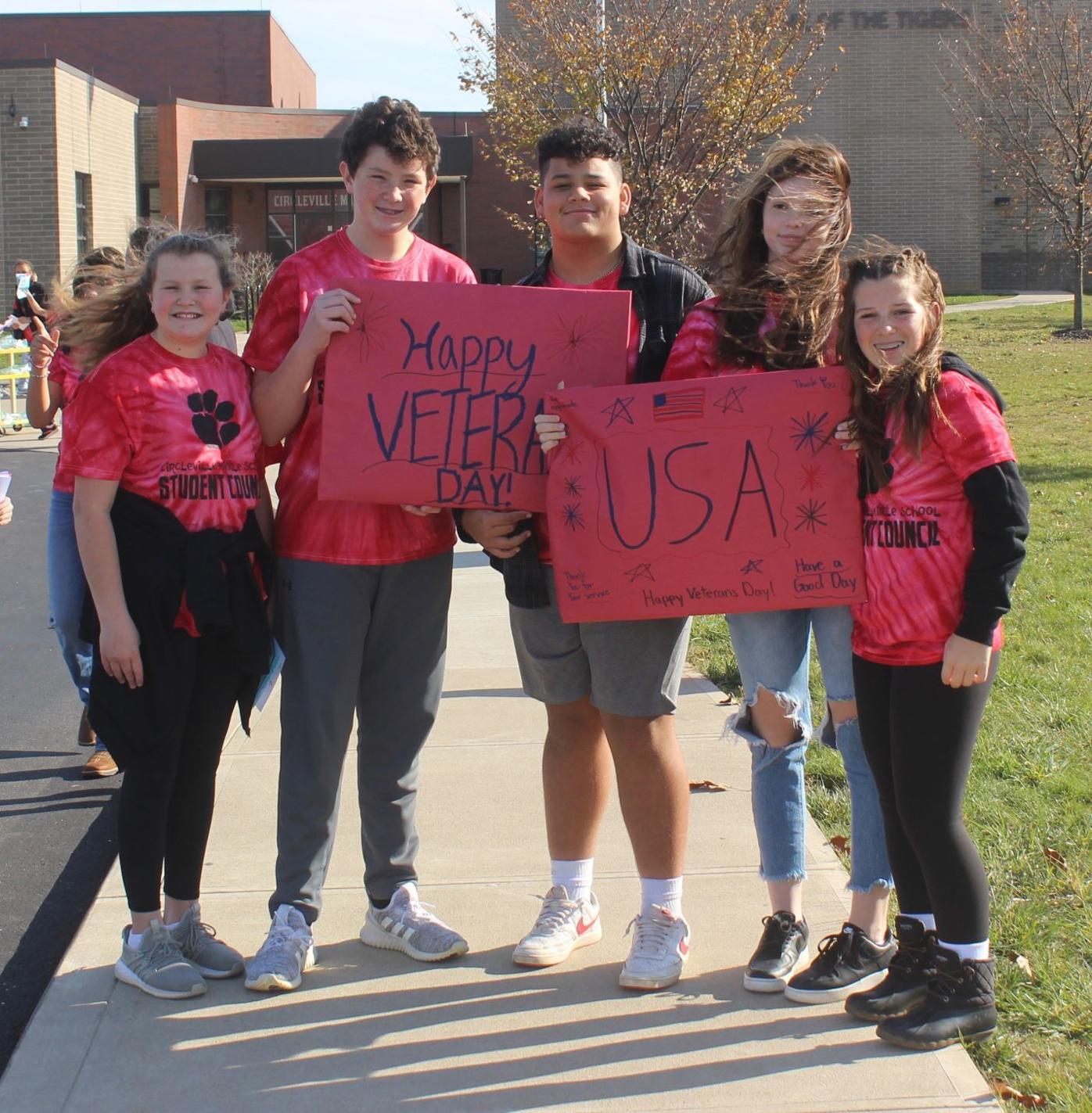 Members of Circleville Middle School Student Council welcomed local veterans during their drive-thru appreciation event in which they handed out thanks, handmade cards, cookies and drinks to veterans who came by. From left, students are Mallory McConnell, Liam McConnell, Ari Travis, Taylor Strawser and Claire Davis. 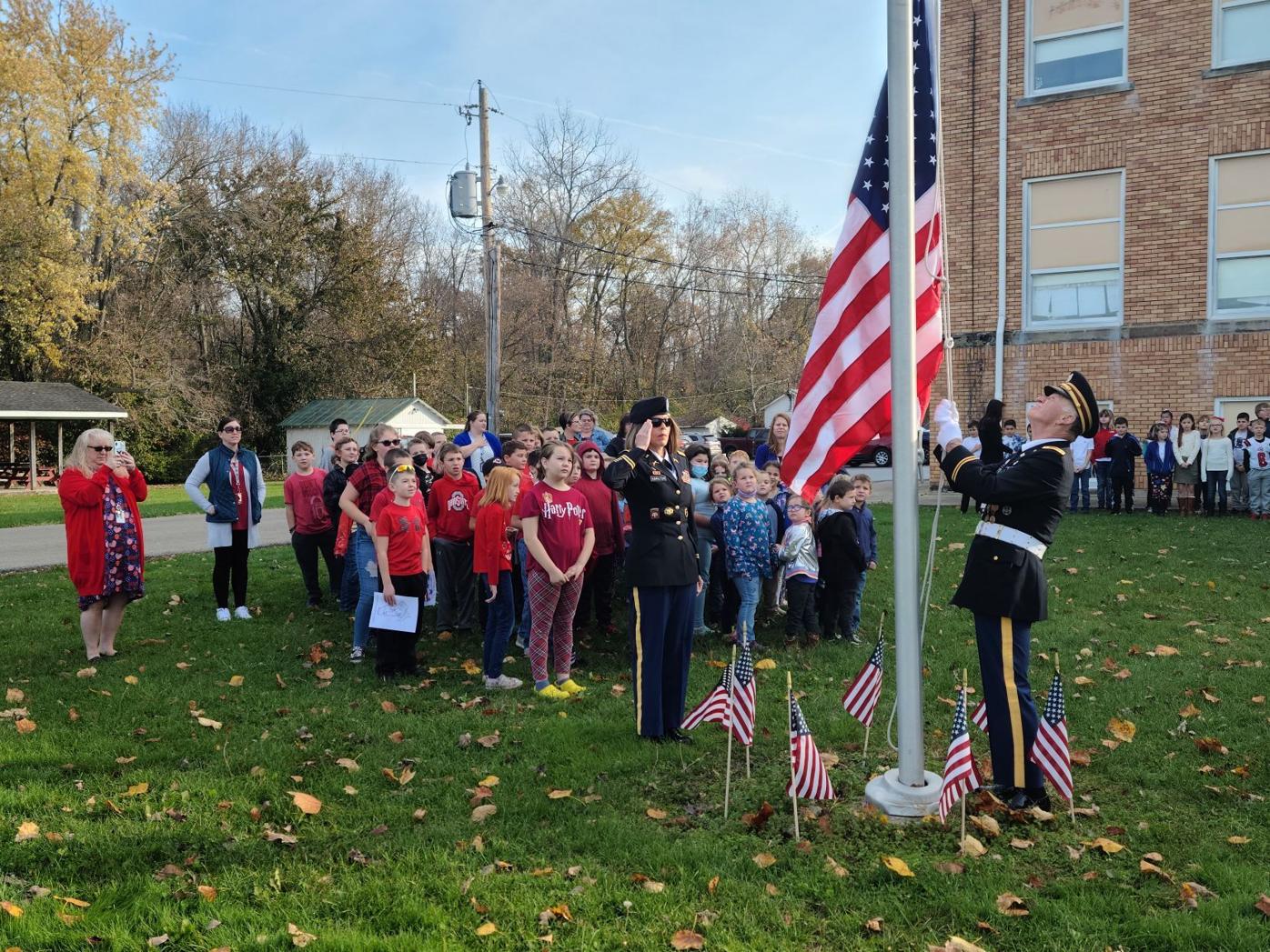 Students at Pickaway Elementary watch as Pickaway County Veteran Glenn Easterday and Patricia Hamilton perform a flag-raising ceremony in front of the school. 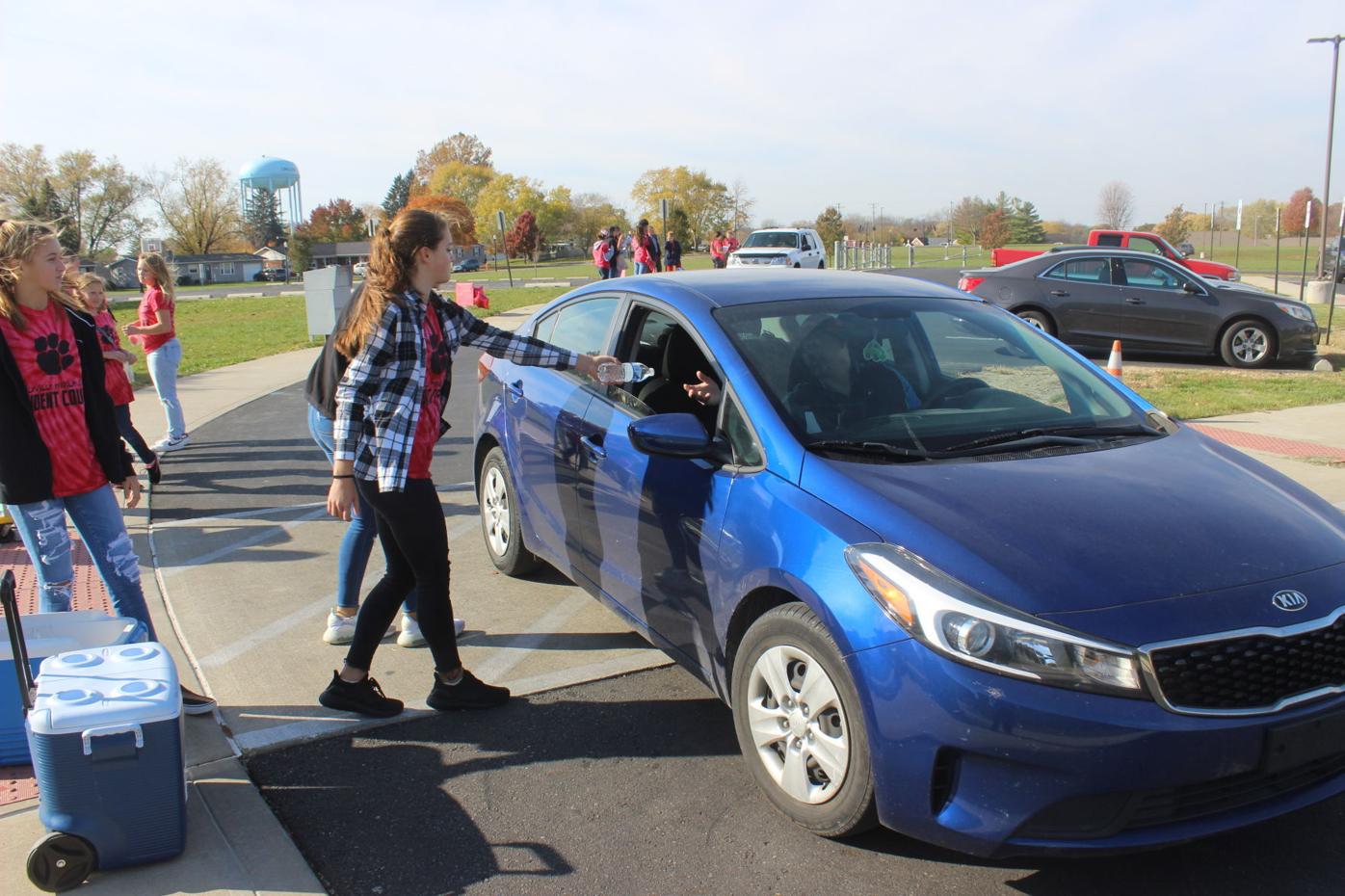 Members of Circleville Middle School Student Council welcomed local veterans during their drive-thru appreciation event in which they handed out thanks, handmade cards, cookies and drinks to veterans who came by. From left, students are Mallory McConnell, Liam McConnell, Ari Travis, Taylor Strawser and Claire Davis.

Students at Pickaway Elementary watch as Pickaway County Veteran Glenn Easterday and Patricia Hamilton perform a flag-raising ceremony in front of the school.

CIRCLEVILLE — Students from across Pickaway County honored veterans Thursday on Veteran’s Day in a number of different ways.

For students at Pickaway Elementary, they held a ceremony outside, in front of the school, with a flag-raising ceremony, a few songs and Taps, followed by a moment of silence.

Principal Joanna Strawser said they wanted to make sure students knew the importance of the day, as well as how to honor them. In addition to the ceremony, they had additional assignments.

“On the sheet, they wrote the name of their veteran, branch of the military they served with, their years served and a place for the students to write their name. There was also a star so the students could place an actual picture, draw a picture or decorate the star. Students could have more than one star. We had over 150 stars turned in with names of veterans.

Our teachers did additional things, including a couple classrooms that read the book ‘America’s White Table’ and set the table; some classrooms completed little booklets on Veteran’s Day,” Strawser added.

Strawser said there also was a visit from Veterans Glenn Easterday and Patricia Hamilton who spoke to fourth-grade students.

“The students really enjoyed being able to ask questions and learn about their duties,” she said.

At Circleville Middle School, the student council passed out cookies, drinks and handwritten cards to the veterans who came to their outdoor drive-thru. Normally, the school hosts a breakfast, but they were uncertain of what might be possible. The plan is to bring that back for next year.

Janet Wastier, co-advisor of student council, said it’s important that the kids know what it means to be a veteran and that military service is a possible life path for them should they choose.

“The kids were able to fill out a form and invite someone specifically if they knew someone,” she said. “We’re trying to do something to honor our veterans.”

Wastier said she hopes the students come away with an appreciation of their veterans.

“I think it’s a great way for them to also see that [military service] is a career path for them,” she said. “In schools, we push career tech and college, but this isn’t something we push and there are a lot of opportunities for them.”

Wastier said she believed that a lot of the veterans, especially older veterans, who see things in media might want to realize they’re appreciated, especially by children.

“They appreciate knowing that the students are being taught this in school,” she said. “I think in the media right now, people feel like schools aren’t teaching the kids to be proud of where they came from and how they got there. I think it makes the veterans feel good to receive the appreciation.”

Several of the Teays Valley Schools participated in events, including planting of flags in front of the high school, assemblies and receptions for veterans at each of the elementary schools and the day was kicked off with a breakfast at Teays Valley East Middle School. Students across the district also coordinated to wear red, white and blue.

South Bloomfield Elementary had an event planned for 1:30 p.m., but it was canceled due to the water main break in the village. It has been rescheduled for Monday at the same time.