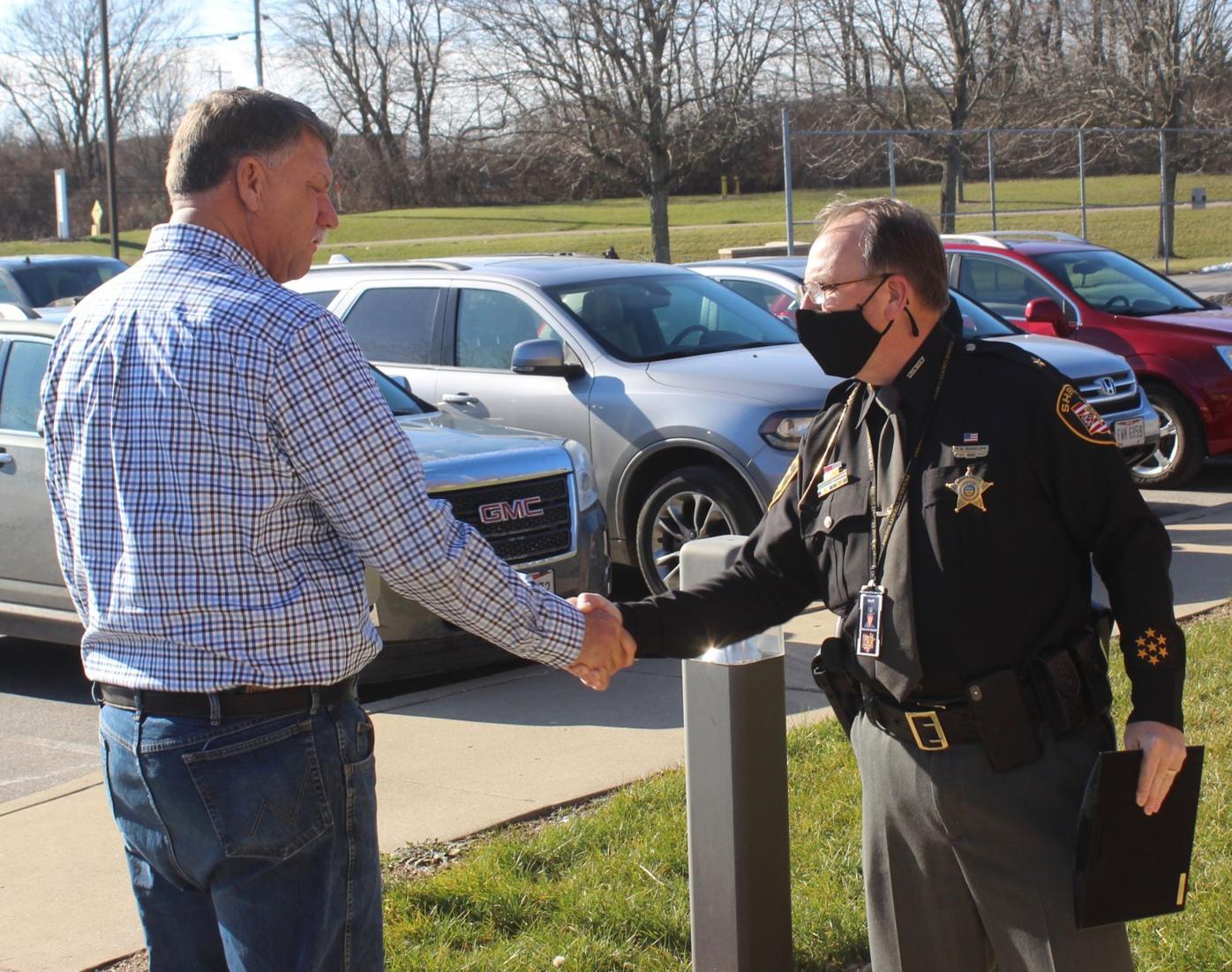 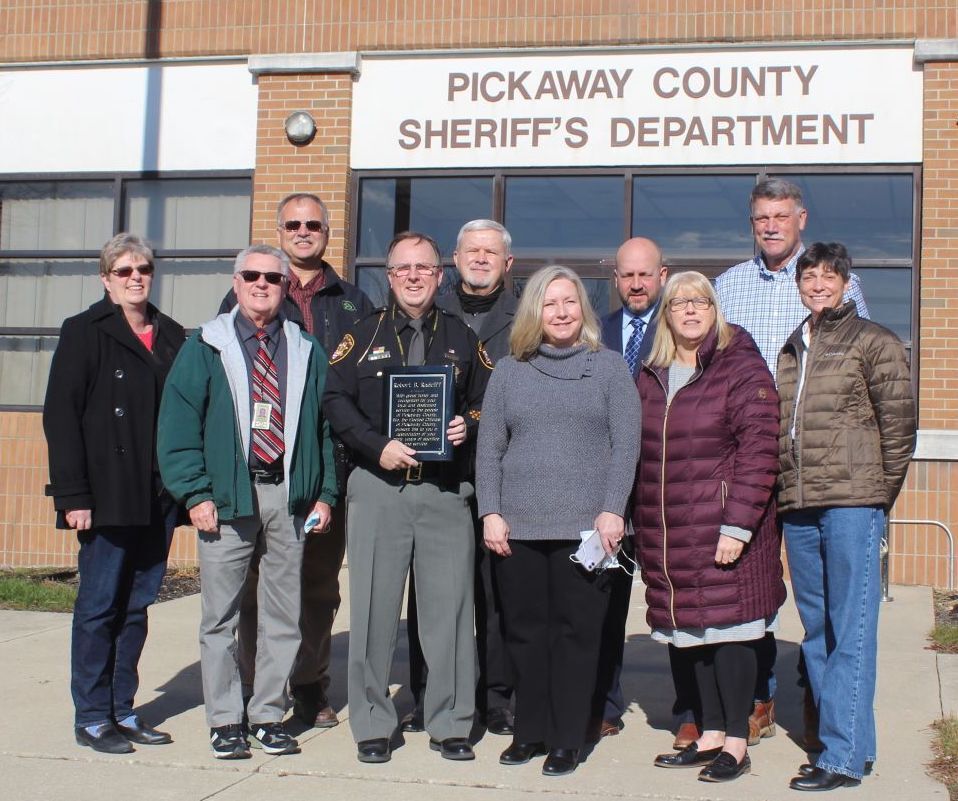 Pickaway County’s Elected Officials presented Sheriff Robert Radcliff with a plaque honoring his service Tuesday ahead of the end of his term. 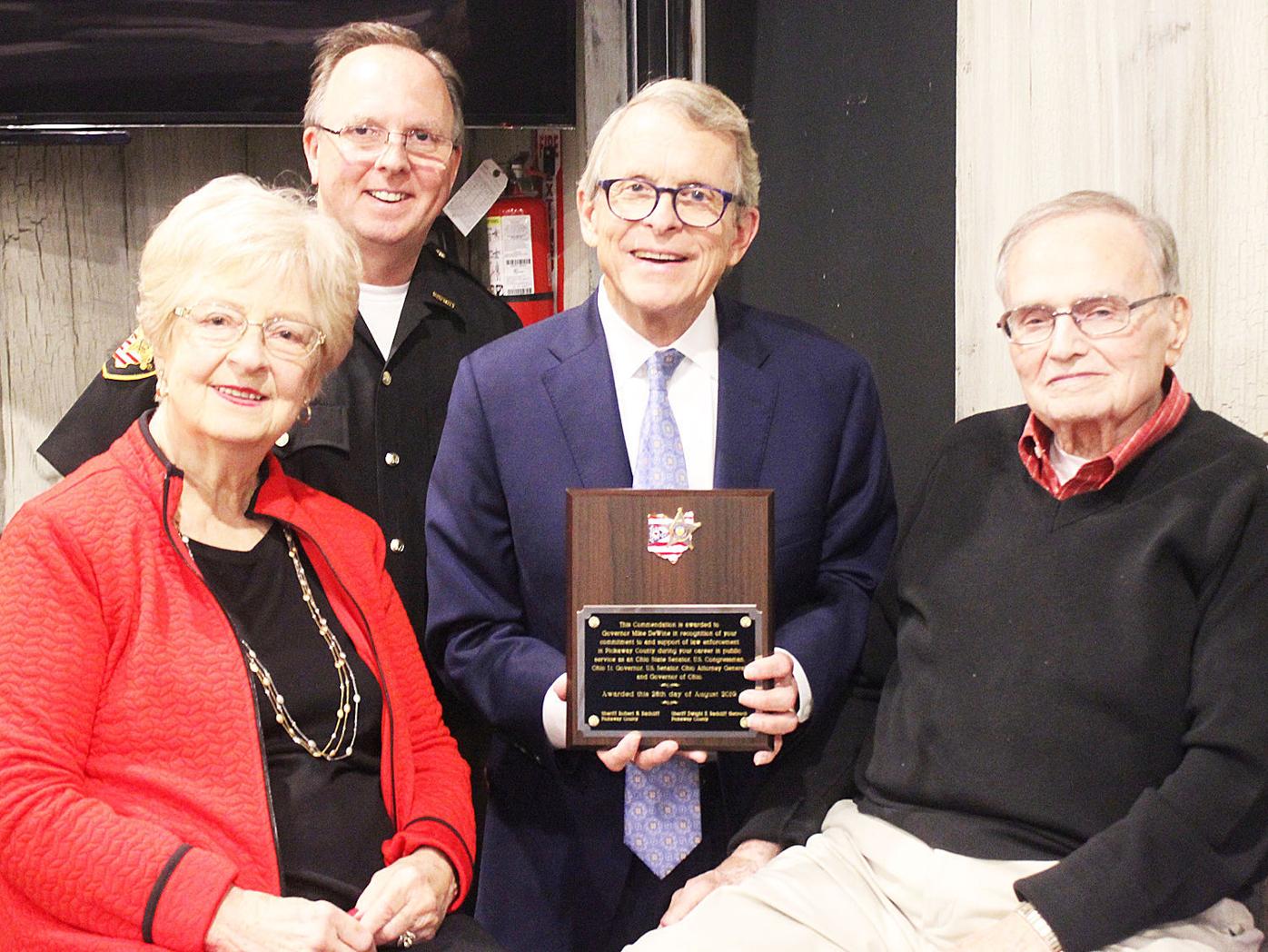 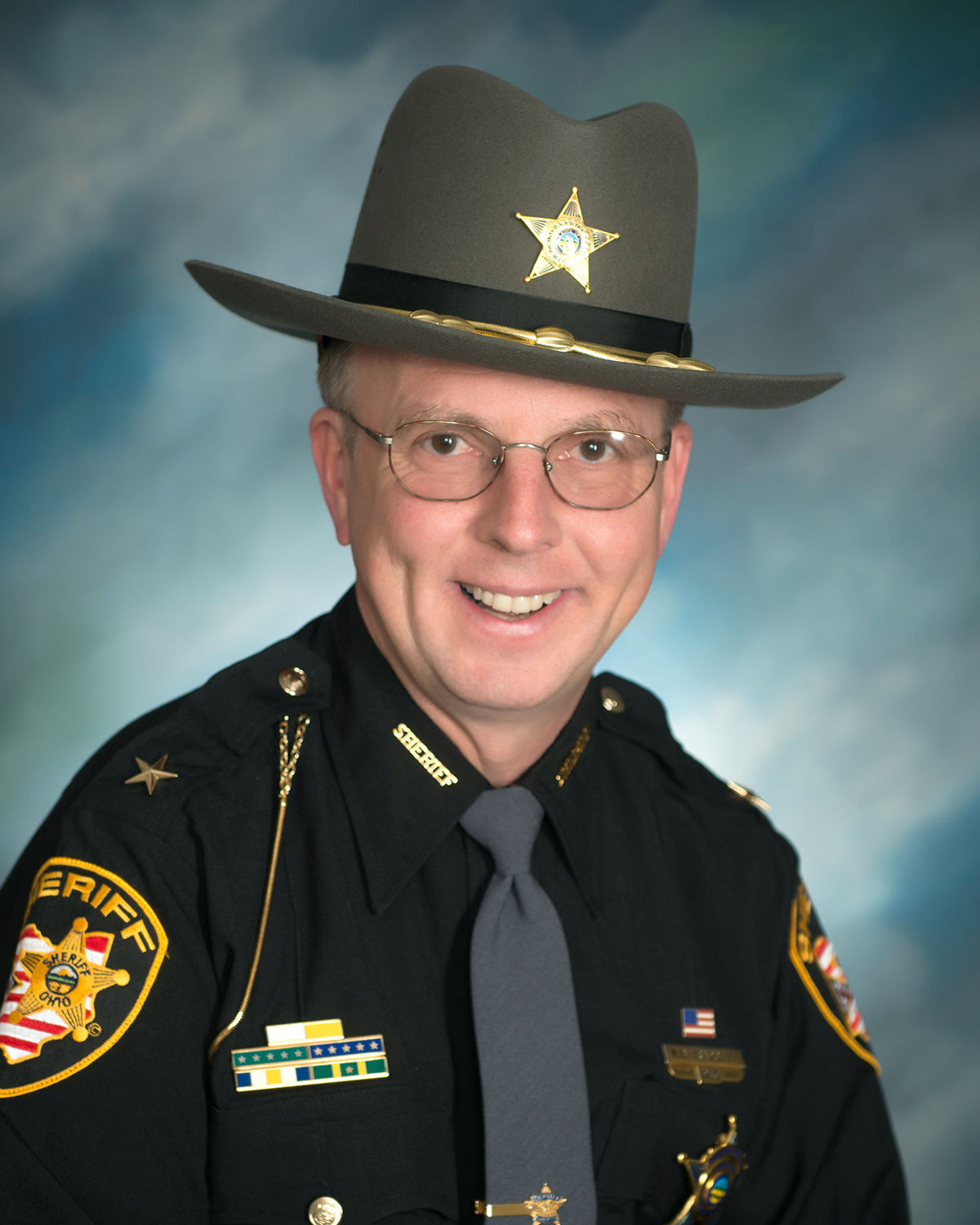 Robert B. Radcliff officially was honored for his service.

Pickaway County’s Elected Officials presented Sheriff Robert Radcliff with a plaque honoring his service Tuesday ahead of the end of his term.

Robert B. Radcliff officially was honored for his service.

Radcliff, 58, was surprised Tuesday afternoon with a luncheon from his family and Sheriff’s Office employees and was honored by his fellow Pickaway County Elected Officials with a plaque.

Pickaway County Engineer Chris Mullins presented Radcliff with the token of their appreciation reading the dedication on the front.

“To Robert B. Radcliff, in recognition for your loyal and dedicated service to the people of Pickaway County,” Mullins read. “We, the elected officials, present this to you for many years of sacrifice and service.”

Radcliff reflected on his time as the sheriff, and got emotional thanking his friends and fellow elected officials for their friendship and support.

“It’s been an honor to call you my friends, each and every one of you and to work beside you,” Radcliff told those at ceremony. “I followed a great leader, someone that left a footprint you can’t ever fill, and hopefully I leave The Sheriff’s Office in a better place; I want the people of Pickaway County to be protected and to see the office to flourish and to keep on going in the right direction.”

He joked that he couldn’t give as much help to incoming Sheriff Matthew Hafey because he’s made it his mission to pack up the memorabilia his father, the late Dwight Radcliff left behind.

“After 48 years of Dwight Radcliff and everything he collected, he never got rid of everything, since the election, that’s been my focus to not have to leave with someone else,” he said.

Radcliff said he’d miss the people the most, but not just the Sheriff’s Office employees or Pickaway County Elected Officials.

“I found the picture of Charlie Dewitt Jr. from New Holland and he’d be in jail sitting on his fines and he was like part of our family,” he said. “I was raised around those people and there are a lot of good people that go to jail. There are good people that make mistakes. They’re not all hardened criminals. He was a good man who had a good heart. When there was a riot in the jail in the 1970’s, he stood in the doorway to protect our family. He wasn’t going to let the prisoners get to the family or my mom. He told us nobody was going to get to his Betty. I think that goes to show how we treated people.”

This year, following tradition, they passed out holiday meals on Thanksgiving and Christmas. Growing up in the old jail, it was separated by a wooden door and a set of metal bars.

Those relationships aren’t the only ones he’ll treasure.

“I look at the friendships I’ve made in Scioto Township, the former Trustee Terry Brill who I didn’t know when I ran the first time,” he said. “It’s people like that, the people that I talked to when I worked security at bingo and all the older ladies who were my friends that I don’t get to see.”

Radcliff said now that he’s in his final few days, he understands why things were so difficult for his father.

“Looking back, I can see after all those years how difficult it was for him,” he said. “Back when dad was the sheriff and lived at the residence, he never got away from it. I have a wife and kids and that’s what’s important to me, my family. The Sheriff’s Office is important to me, but it’s never been mine. As I’ve said before, this office belongs to the people.”

Radcliff has the support of his family. His wife, Dodie Radcliff, is looking forward to not being woken up in the middle of the night when the phone rings.

“He deserves it,” she said. “I know this is what he chose to do and I’d back him no matter what, but I’m glad to have him home. I think he’ll move on to bigger things; it’s a matter of time, but he deserves a break. I saw a picture of when he was sworn in the first time and I was like ‘oh my’.”

“I feel like I can say this for my sister, my brothers and my stepmom, but I can honestly say that people know the man, they saw every day on social media, in-person, going to wherever, that was him,” she said. “He’s never been anything different. The man we see is the man they see. He’s put his blood sweat and tears into Pickaway County. I am so proud of him.

He jokes that he’s going to go be a Walmart greeter and I told him I don’t care what he is, because he’s the best, hands down,” she said. “We’re so proud of him.”

Radcliff said it’s a tough job to be a public servant and to be in law enforcement because of the constant criticism for every decision especially in a digital age.

“People can say very cruel things about elected officials on social media,” he said. “They can say whatever. It’s hard to do our job because they’re out there before we can even do our job.”

Looking ahead, Radcliff said he plans to step back, think about life and spend time with his family and then stay involved in the community, but in other ways. He said it’s hard to imagine his life post Sheriff’s Office since it’s been pretty much all he’s known.

“It’s been the honor of my life to serve the citizens of Pickaway County and I can’t thank them enough for the privilege they gave me to be their sheriff for eight years and to be a deputy for 32 years,” he said.

“Just because I’m not sheriff doesn’t mean I won’t be in the community. I’m going to be active doing good things and I want to be involved. It’s about service to the community, whether it’s an elected official or through rotary or whatever. I’m not one to not be involved. Too many people sit on the sidelines and I don’t want to be one of those people. I feel like it’s my obligation to be involved. I’m the person I am, regardless of the title I hold.”