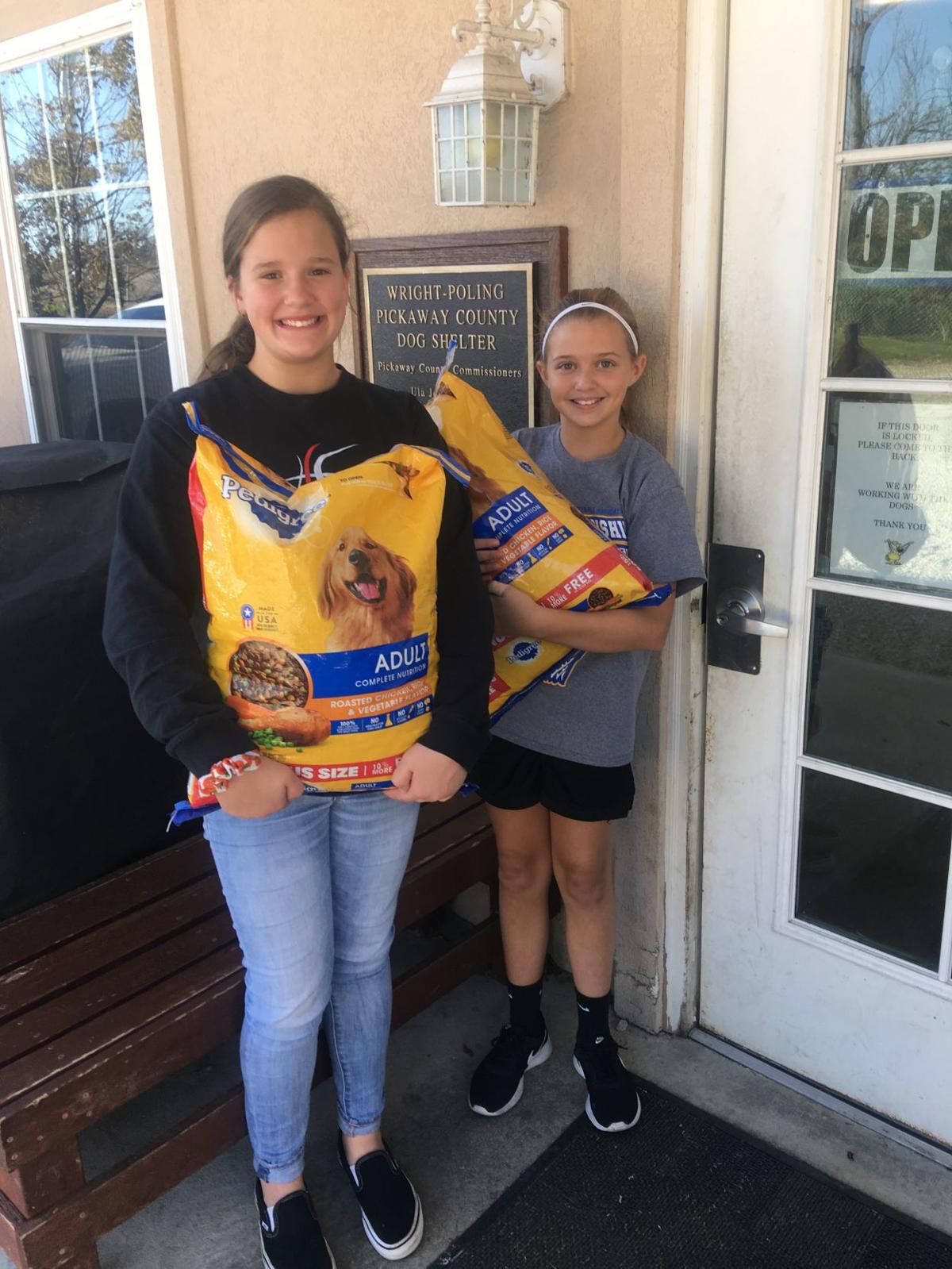 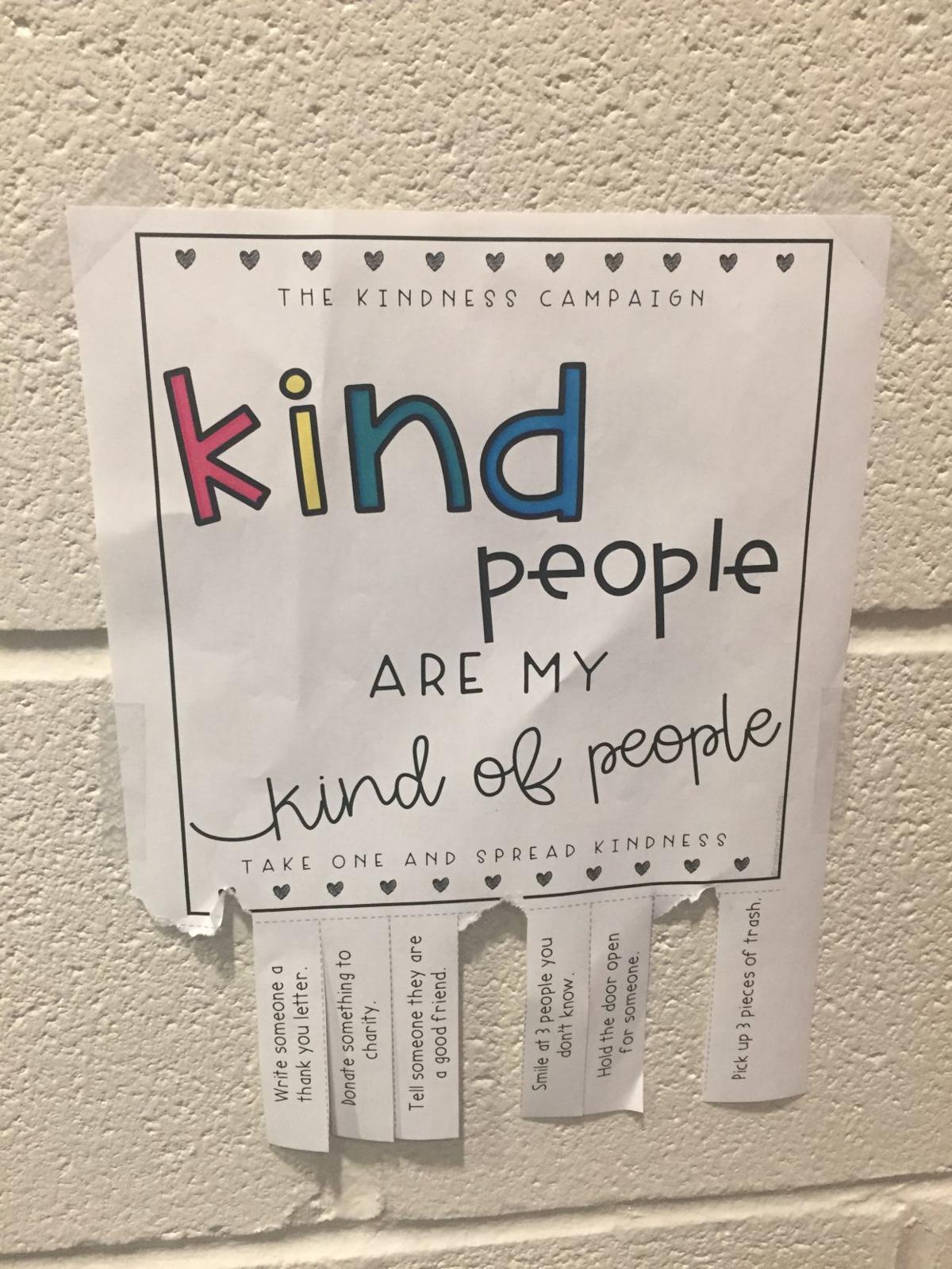 Signs hang in the hallways at Circlevville Middle School promoting kindness, including this one that has tasks of kindness that students can rip off and perform.

Signs hang in the hallways at Circlevville Middle School promoting kindness, including this one that has tasks of kindness that students can rip off and perform.

CIRCLEVILLE — Students at Circleville Middle School are promoting kindness in an effort to lift each other up after a bad day or even on a good one.

Mary Hampp, Circleville Middle School guidance counselor, said the club has undergone some changes, including a shift from Anti-Bullying Club to Kindness Club.

“I really wanted to ensure we had actionable steps that we could promote actionable steps in our building,” Hampp said. “Social emotional learning is such an important part of what schools need to be doing now. We want kids to be more aware of how their actions affect other people, the things they’re doing and saying.”

Hampp, in her first year as the school’s guidance counselor, said students were tasked daily to promote kindness. Those included sending positive text messages, tape a quarter to a gum ball machine for another child, and leave a note of kindness in a stranger’s locker or school mailbox. One of them was the idea to give kids a task and once they did that task they would sign a card, similar to how libraries use to check out books.

“Our club members wrote an act of kindness at the top of it and then do that act of kindness,” Hampp added. “They’d then hand it off and if you accepted it you had to do it too.”

Hampp said she wanted tasks students could and would want to complete.

“We’re doing an attitude of gratitude leading up to Thanksgiving and they’ll put it in a box and they’ll be read on the announcements,” she continued. “Next month we’ll have a bulletin board of things that bring you joy. Our goal is to flip the way we think about things and the awareness we have for those around us.”

Hampp said students are more accepting of differences now than perhaps historically because “different is the new norm.”

“I think younger kids don’t notice things like race, sexuality and don’t care about it as much as the generations before do,” she said. “I don’t know what to attribute that to.”

Hampp said she’s reading books on trauma and healing the brain and a big part of those books is about empathy.

“If you can develop empathy, it not only helps you in your relationships but it helps you be kinder to yourself and then it snowballs,” Hampp commented. “A big part of that is doing acts for someone else and that can do more for the person doing it than the person receiving it.”

The students seem to be reacting positively to it as well, including Kayla Fleck, a sixth grade student at the school.

“I know some people, when I started talking about what we do, thought it was cool,” Fleck told The Circleville Herald. “They asked me about what we do [in Kindness Club]. I think some students are doing things so teachers can see they’re being kind so they can be a part of the club. It has made an impact and it makes people know that we care and that they’re not alone in anything.”

Addy Nungester, a seventh grade student, said she thinks her friends tend to be happier.

“They read the signs around the school and they make them laugh,” she said.

Both students said they like being in the club.

“I just like seeing people smile,” Fleck said. “When I watched the movie Wonder, it made a big impact. Some people are different and you don’t know their background stories. That’s why I started in the club and I wanted to be really kind.”

Nungester said for her it’s about helping people who are having a bad day feel better.

“I like being able to help out to make sure people who are having a bad day know they’re cared about,” she said. “I was having problems with people bullying me and a couple people made me feel better by talking to me.”

Fleck said she too has been on the receiving end of kindness from others.

“I was talking about how I was sad one time and my friend got me this basket that helped make me feel better,” Fleck stated. “I was having a bad day on one of the kindness days and someone put a sticky note on my locker and that made me feel better.”

Hampp said it’s important for students to feel supported and loved and if they do they’ll be more likely to be cooperative in learning and work together to achieve their goals.

“A lot of kids who sit in my office don’t want to be here because they feel like they don’t have any friends or that anyone cares about them,” Hampp remarked. “They want to go to homeschooling or think it’ll be better in another school not realizing a lot of the issues start with them.”

Hampp said she plans to talk with the school’s administration about how the club will grow and change in 2020.

“Our group is a very a-typical mix,” she said. “Usually these groups are your athletes, student council kids, teacher’s children and we have some of those but we also have students that don’t interact with staff or students very well. The goal was to include those kids in the conversation to turn them so they could turn to their peers. I don’t know if our goal is to become huge and to include everyone or if it’s to take a core group of kids to spread it and then include everyone in our activities.”