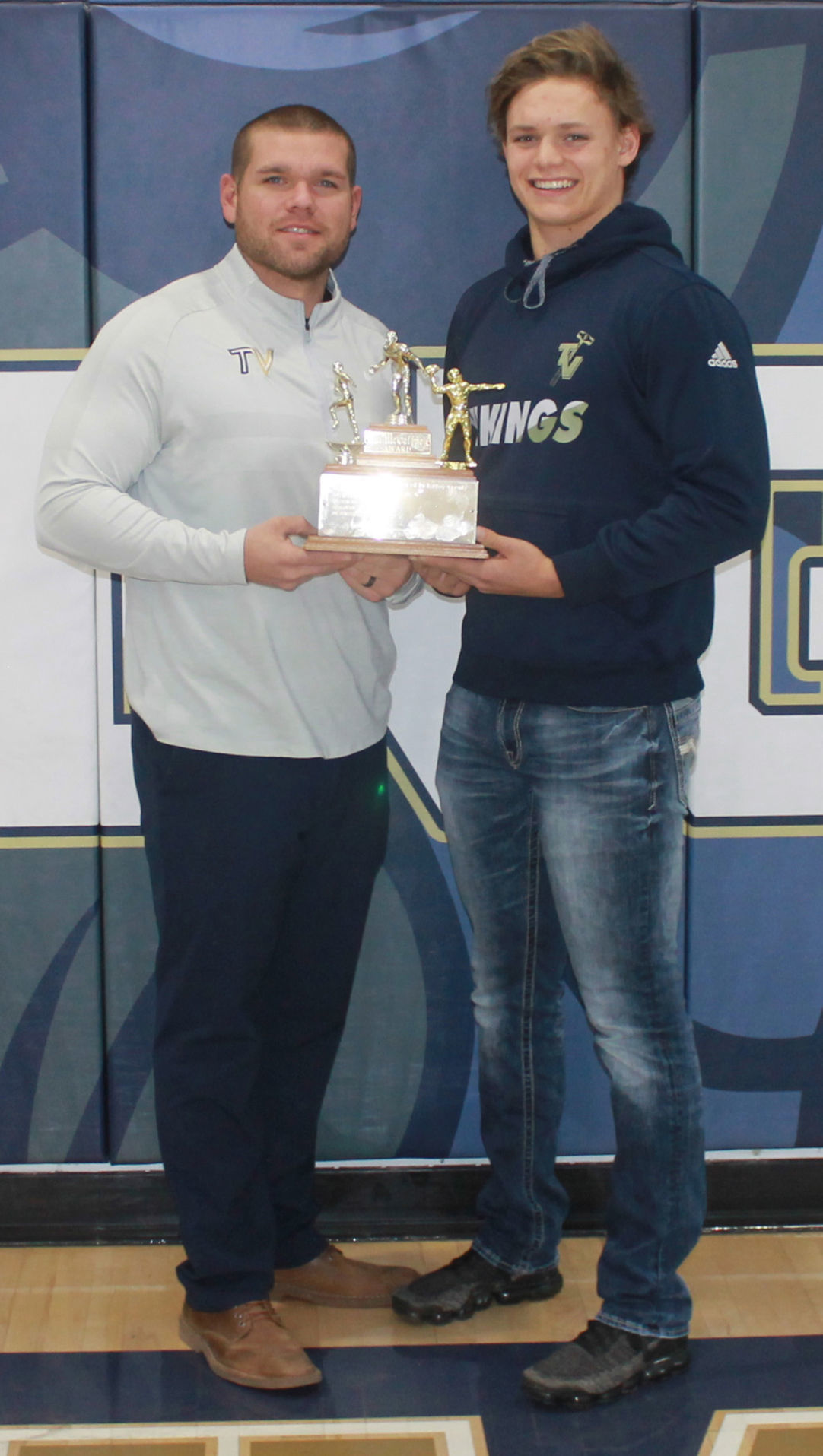 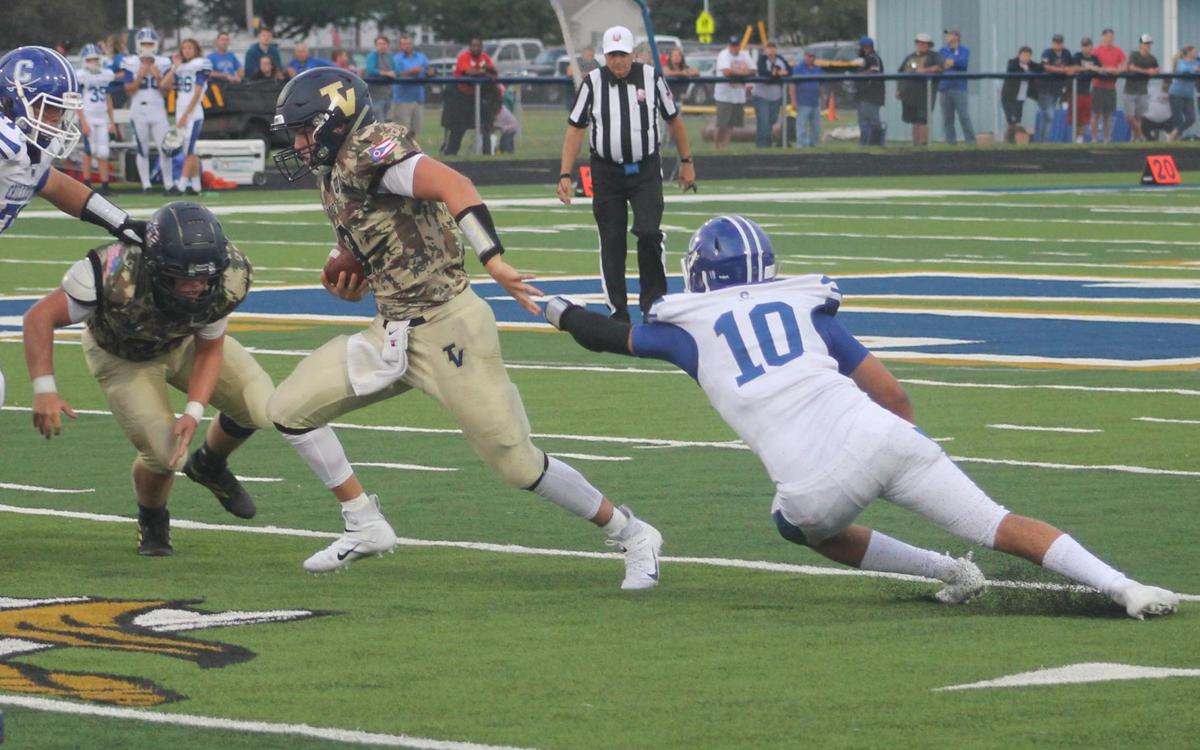 Teays Valley’s Tristan McDanel gets a carry in the season-opener against Chillicothe.

Teays Valley’s Tristan McDanel gets a carry in the season-opener against Chillicothe.

ASHVILLE — When Tristan McDanel looked down on his jersey and saw a ‘C’ for captain, he valued the trust and responsibility his teammates placed in him.

“It’s a good feeling to know I have that type of respect from my teammates and I take that leadership role seriously,” he said. “I consider myself more of a leader by example with how hard I work, but I also try to rally our guys and can be vocal when I need to be.”

McDanel was an effective leader and quarterback this season for the Teays Valley football team, which led him to earn the Bill McGaffney Award as the top senior football player in Pickaway County.

He’s the third-straight Teays Valley player to win the award and fifth in the last six seasons.

“It’s an honor to win that award and follow my teammates who have previously won it,” McDanel said. “I looked up to Brandon Coleman (2017 winner), because we both played quarterback, and I’ve known Taylor Robinson (2018 winner) for a long time and we played together since biddy ball.

“One thing I admire about both Brandon and Taylor was their ability to play calm and collected under pressure.”

McDanel rushed for 983 yards and 11 touchdowns this season and also added 570 yards passing and six touchdowns.

“When our linemen create a hole, I’m able to hit it pretty well and once I get to the second level I have the ability to run past a defender or if I need to lower my shoulder and try to outphysical them,” McDanel said. “That comes from playing outside linebacker on defense growing up.”

McDanel credited the growth of the Vikings’ offensive line over the course of the season for their success in the run game.

“It starts up front and we were younger there than we have been lately with a couple of sophomores starting,” he said. “Evan Mckenzie and A.J. Moniaci really grew during the season and did a nice job and then I knew guys like Lucas Breniser and Kade Kirkpatrick would be solid and do their job.”

Teays Valley coach Mark Weber lauded McDanel’s qualities that led to his success on the field.

“I love kids like Tristan, because they work extremely hard, whether it’s morning or night, and they are never satisfied,” he said. “Tristan is a very competitive young man, he’s a good leader and he’s a tough, hard-nosed football player.

“When you look for an example of what a Teays Valley football player is, Tristan is a pretty good place to start.”

McDanel discussed the influence his father Josh, who is also the Vikings’ offensive coordinator, has had on his career.

“My dad is one of my biggest motivators and he always pushes me to do my best,” McDanel said. “He did some pretty big things around here and to follow him by being part of the first class here at Teays Valley to win three consecutive league championships is something I’m proud of.”

The Vikings opened the season with a 14-0 shutout of Chillicothe, snapping a four-game skid to the Cavaliers in the non-league series, and followed that up with a 10-7 road win over Logan.

“We always seem to have great games between Chillicothe and us and they’ve been the one to come out on top over the past few years,” McDanel said. “To start the season by beating Chillicothe, that was a huge win for us, and then we followed that up by beating Logan.”

The Vikings faced their first adversity in the loss column the following week with a 66-7 loss to eventual Ohio Capital Conference Capital Division champion Canal Winchester.

“That was a game where nothing went right for us and it just kinda snowballed,” McDanel said. “That loss kinda brought us back to Earth and showed us we still had a lot to work on and that we could improve on.”

The Vikings bounced back to win five of their next six games, including a 28-21 victory over Amanda-Clearcreek to win a share of their third consecutive league title. Teays Valley finished the season with a 7-3 mark.

“We picked up some momentum as a team and we played better on both sides of the football,” McDanel said. “Getting to play Amanda here with the league title on the line and winning that game was huge.”

McDanel wants to play football in college and major in a field, potentially exercise science, so he can one day open a gym and help train the next generation of athletes.

“I love working out, being in the gym and helping people, so that seems like a good fit after college if I can make things work out,” McDanel said.

Once he graduates from Teays Valley in the spring, McDanel will take a number of memories with him.

“We had a lot of success here, but what I’ll remember the most is having fun playing with my friends and all the time we had to hang out with each other,” McDanel said. “We have a smaller senior class this year (with 11 players), but we were really close-knit and tried to leave a foundation for the younger kids to take and build on.”