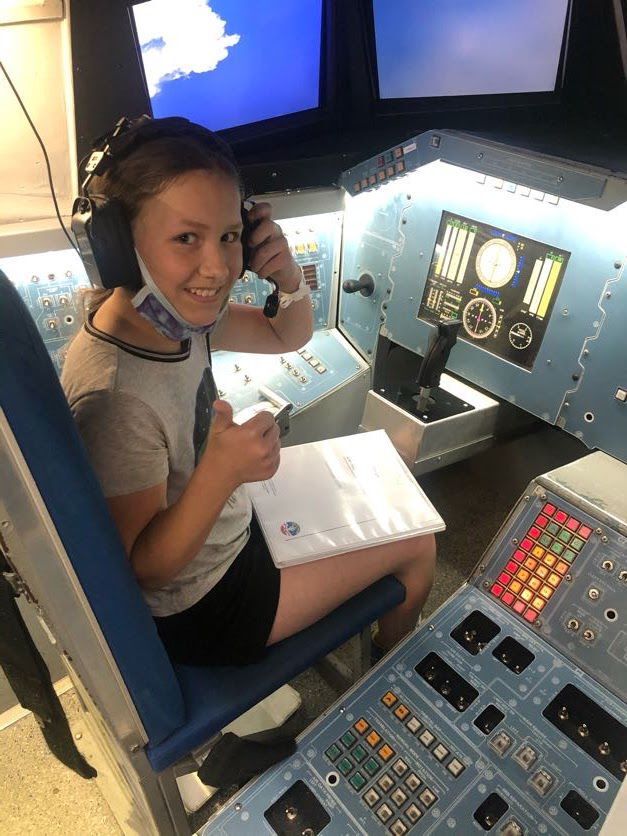 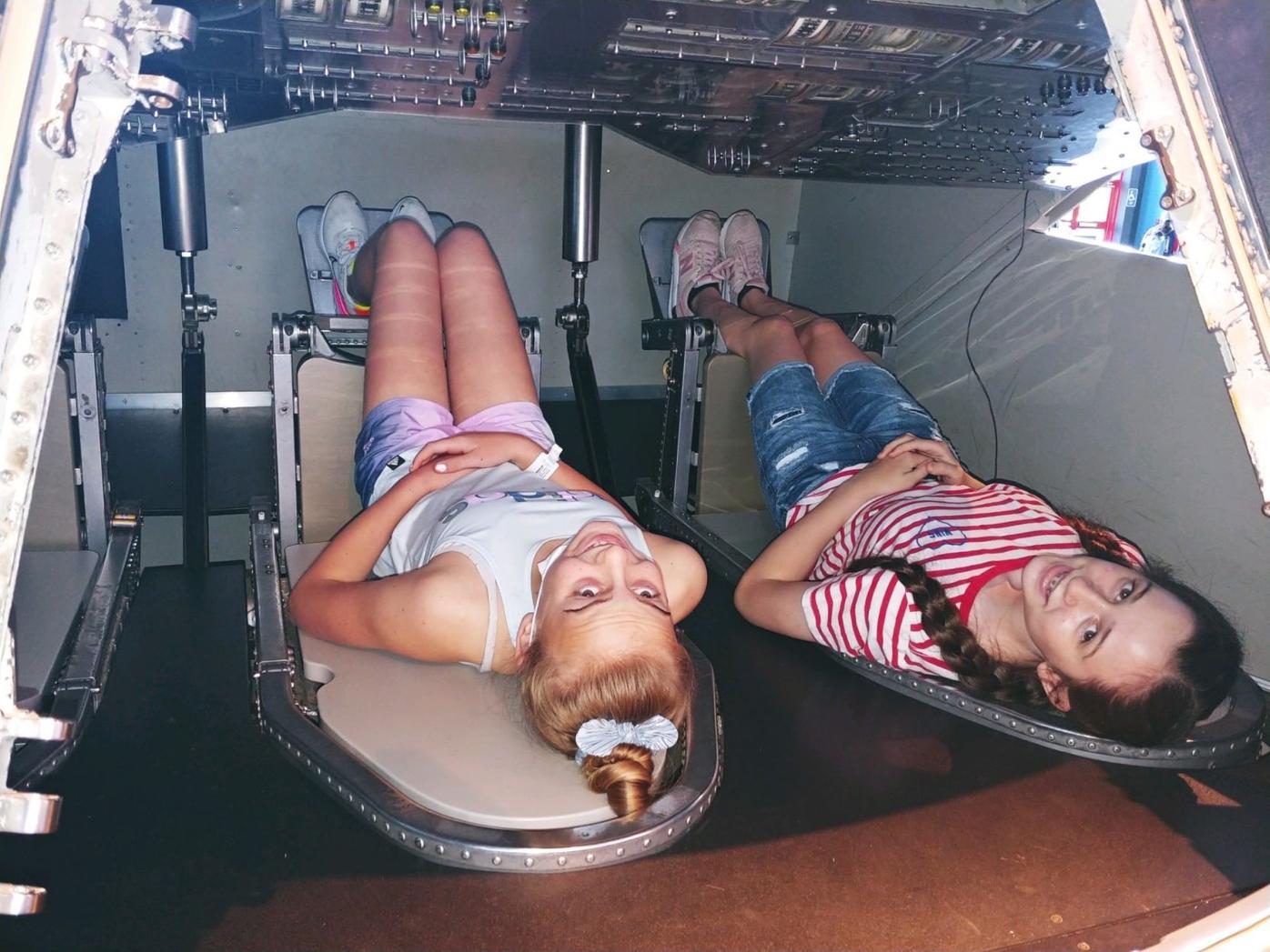 Students Maria Knupp and Emma Mintion preparing for launch during one of the mock missions at the U.S. Space and Rocket Center’s Space Camp Titan Program. 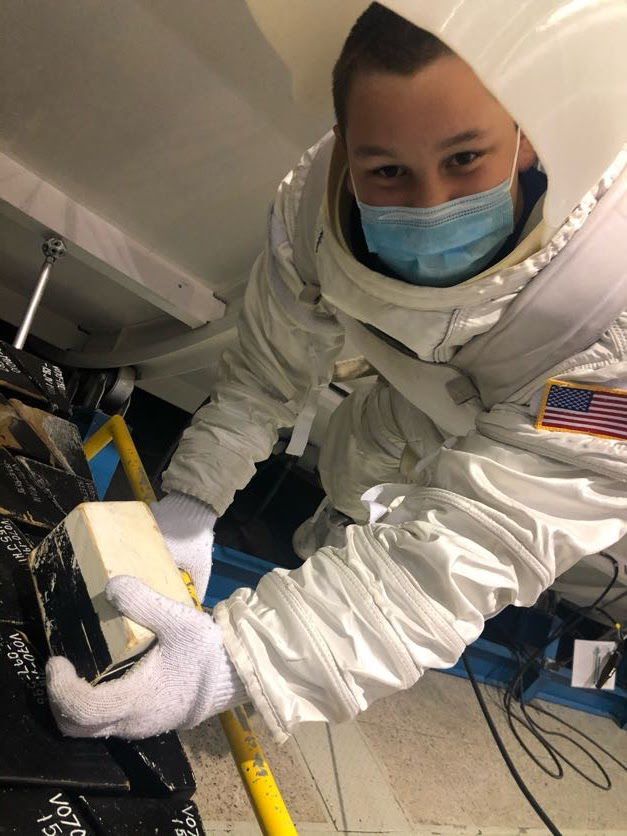 Students Maria Knupp and Emma Mintion preparing for launch during one of the mock missions at the U.S. Space and Rocket Center’s Space Camp Titan Program.

SOUTH BLOOMFIELD — For some of the fifth- and sixth-grade gifted students at Teays Valley, their education has really gone to the moon.

As part of their education, the students take a yearly trip to Huntsville, Alabama to the U.S. Space and Rocket Center’s Space Camp Titan Program. Students, during their visit, participated in a simulated shuttle mission and learned about the science and history of space travel, as well as participating in other activities.

Carmen Tarbill, gifted coordinator and teacher at South Bloomfield Elementary, said the experience helps the students get hands-on with history and science.

“It’s a cool experience for them,” she said. “They learn about rockets and space history and do a lot of team-building activities. For some kids, it’s a life-changing experience because they get to see a career option that might not have otherwise considered, but it’s just not in Pickaway County. The space program, like a lot of professions, is so diverse in what it does that there’s something there for everyone.”

Tarbill said a highlight for both her and the students is a mock space shuttle mission they all take part in.

“The kids get to participate in a mission on simulators and some of those have been used in real astronaut training,” she said. “Every student is assigned a different role, whether it’s commander, pilot, flight director or mission scientist. The goal of the simulation is to launch the shuttle, meet up with the space station and return home, but during the mission there are problems and the kids have to figure out how to work through them.”

Tarbill said this year’s experience was different than it had been in the past due to the COVID-19 pandemic and that required changes both in planning the experience and taking part.

“We’ve been taking this trip since 2015 and it’s a right of passage for our students,” she said. “Last year, we were scheduled to leave three days after everything closed down. All the kids were packed ready to go, but we had to cancel. So this year, we took fifth grade and some of the sixth-grade students who didn’t get to go last year. It was an emotional journey getting it re-planned and I wasn’t sure it would really happen. Typically, when we attend, there are 3,000 to 4,000 people there, but we were the only 60 that were there. The staff did a great job and pulled out all the stops.”

Tarbill said they get the chance to meet different people who are involved in rocketry and science who come from all walks of life.

“Even though it wasn’t as packed as it is normally, we had lots of people come talk to the students,” she said. “Redstone Military Base and NASA’s Marshall Space Flight is adjacent to it and it was common for people to come over from there and talk to and meet the kids. Someone from NASA who worked on missions came and talked about his job and what they got to do on the space station.”

Tarbill said those interactions, both the hands-on experiences and talking with adults working in the field, make the experience real.

Another aspect of the trip was to get the kids excited about learning something that helps them to absorb what they take in.

“Your brain has to be prepared to learn and your brain is most prepared to learn when you’re having fun and are curious,” she said. “If we can do those two things, then anything else can be overcome. We want to get their brains where they’re primed to learn as much as possible and this does that. It’s really cool to see and be a part of. To them, it’s not just a picture in a museum, but it’s something that really happened.”

After their visit was over, Tarbill said she heard from the camp staff how appreciative the students were to participate.

“We got compliments that they were the best group that they’ve ever had,” she said. “The students hit it out of the park and it couldn’t have gone better.”

In a challenging year in which Tarbill saw some of her students face-to-face for the first time on this trip, the students showed how grateful they were for the opportunity.

“Some of the kids online and I hadn’t seen them in person until the morning that we left,” she said. “We had to follow all social distancing guidelines on the way down and back as a requirement of the approval of our trip. All the students followed all the rules and didn’t complain. It was hot and I was impressed they did it in those conditions. I think it speaks to how grateful they were to have this opportunity and if anything, COVID has made the kids appreciate things like this and they behaved exceptionally well. We didn’t have one issue the whole trip.”