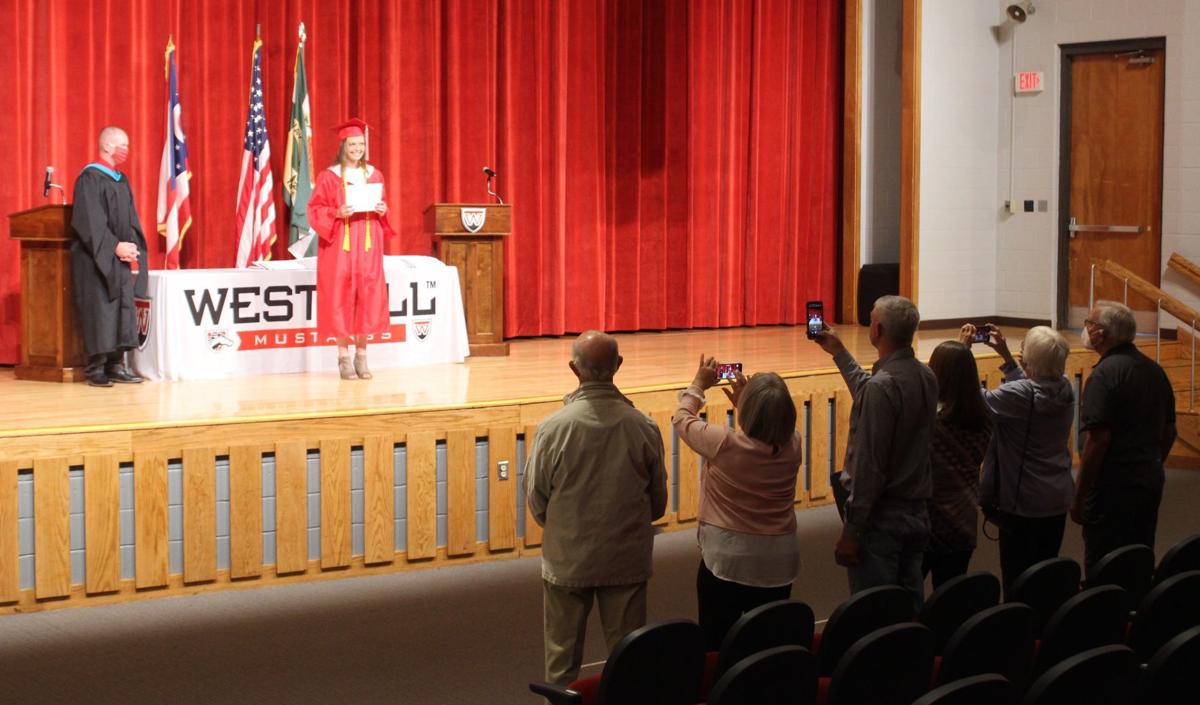 Darby Minor, a 2020 graduate, stands with her diploma in front of family gathered at the graduation ceremony. 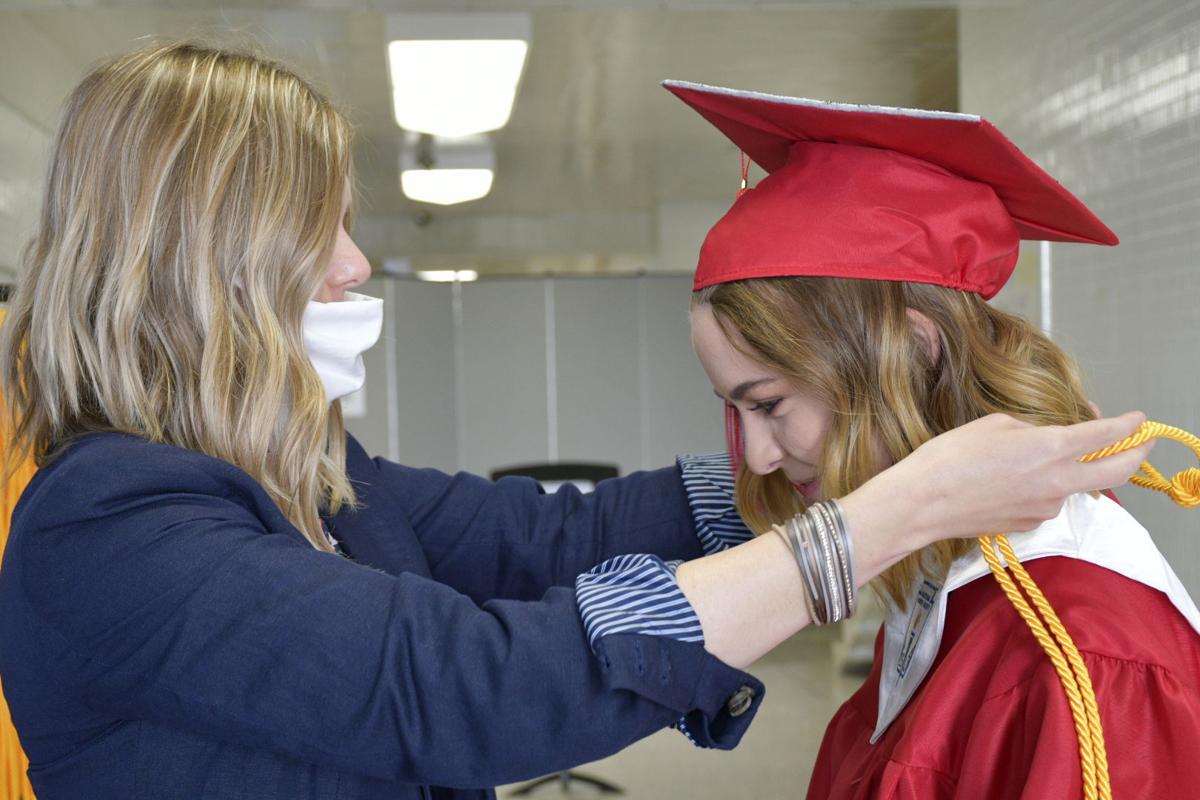 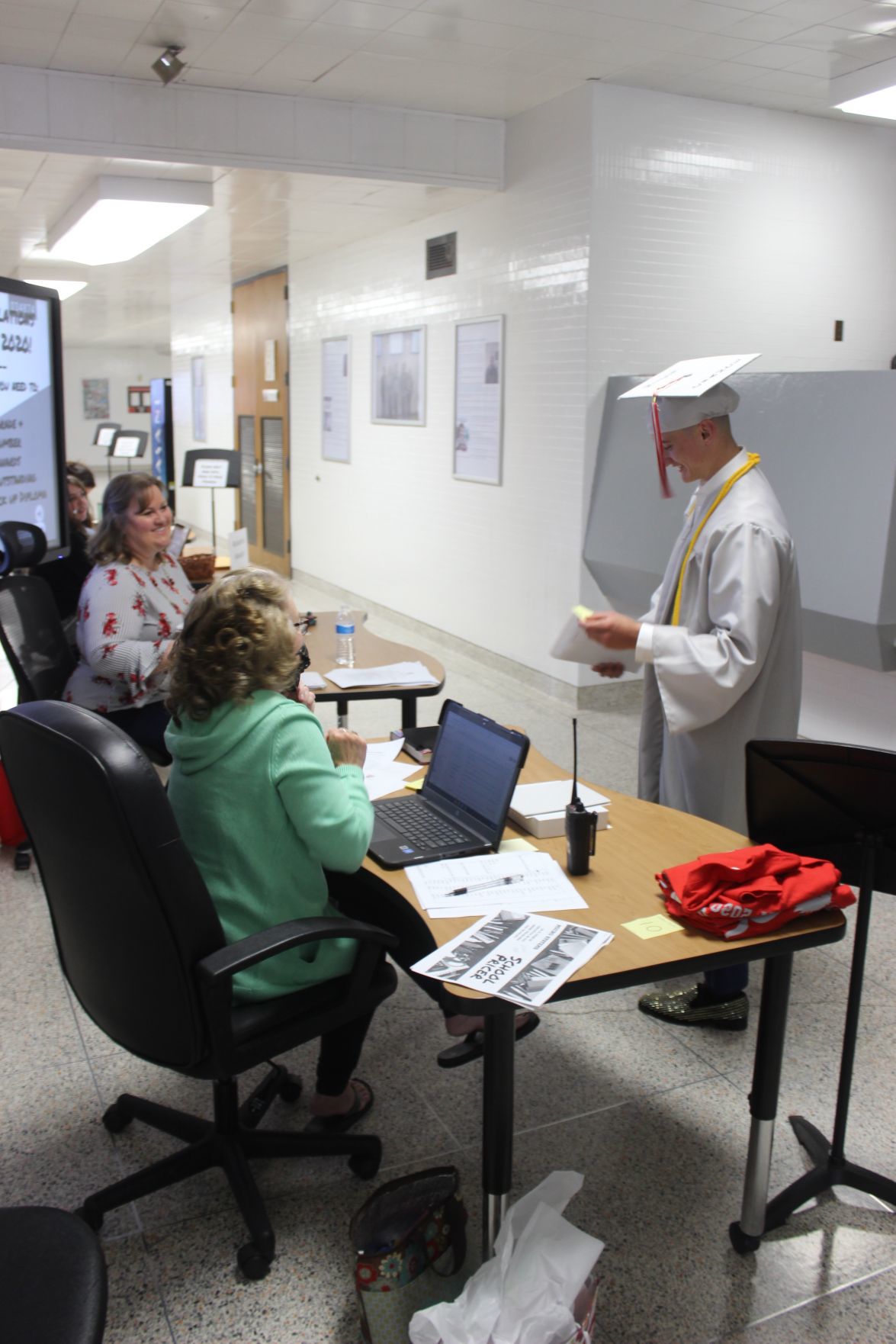 Chanston Moll finishes up with his graduation task list after walking off the stage and receiving his diploma.

Darby Minor, a 2020 graduate, stands with her diploma in front of family gathered at the graduation ceremony.

Chanston Moll finishes up with his graduation task list after walking off the stage and receiving his diploma.

WILLIAMSPORT — The 2020 graduating class of Westfall High School received their diplomas this week, ahead of the official graduation broadcast next week.

While the COVID-19 pandemic and related orders forced school to close early and didn’t allow for many of the 2020’s class premiere events, the school, like other Pickaway County high schools, has put on a changed graduation ceremony for each student.

Students donned their caps and gowns and individually entered the high school this week where they were escorted on a one-way trip around the auditorium to have their name read, receive their diplomas from Principal Billy Dennis and pick up any awards and honors before having their graduation pictures taken with their families. In between each student, the auditorium was sanitized including all handles and chair arm rests.

Dennis said the ceremony was different and it felt like they’d never done a graduation before due to the planning of it.

“In the beginning, we wanted to make sure we had someone personal and as special as we could for each family,” he mentioned. “No matter what, that would take hours of planning and effort. We did it to make sure the kids got their moment; that’s the most important thing.”

“It’s been difficult and in the beginning, it was hard to not be normal but it’s been getting easier with time,” she remarked. “Keeping busy is the most important part for me. I’ve been keeping a positive outlook and looking at what’s going right in the world.”

Dennis acknowledged that the treatment is more individualized under their plan than the whole group celebration that usually takes place. He said comments have been positive on the plan they’ve put together.

“Comments were that they like it because the parents get to watch their kid graduate and then they’re done and are off to something else,” he added. “Even though the group mentality is there, they do feel like it’s special for them and I’m glad they have that feeling.”

Minor said it was different having the individual treatment.

“It’s different getting the gifts specialized to each person and brings a bit of light at the end of the day,” she mentioned.

Minor said that with just having her family, the nerves stayed calm ahead of graduation.

“It was nice having just my family there,” she added. “It was very easy.”

Dennis said they had three full plans in place before changes and regulations came from the health department.

“We’re talking as far back as March when we closed that we started planning what graduation looked like,” he said. “As restrictions became more clear we revised the plan each time.”

Westfall Superintendent Jeff Sheets said he was proud of what the high school staff put together and that they were able to give the students a graduation.

“I’m really proud of the staff,” he mentioned. “They’ve really prepared as meaningful of a graduation as they could for these kids.”

Dennis congratulated the Class of 2020 and shared he was proud of what they achieved.

“Resilience and perseverance are two words that will define this class and group of families,” he concluded. “We’ve never done this before and I hope we never have to do it again, but if we do, we’ll be prepared for it. I know these kids can handle it and this will help prepare them for whatever is next in their life.”

“When you think about the Class of 2020, they’ve accomplished more with two-thirds of a year than a lot of classes have in a total year,” he said.