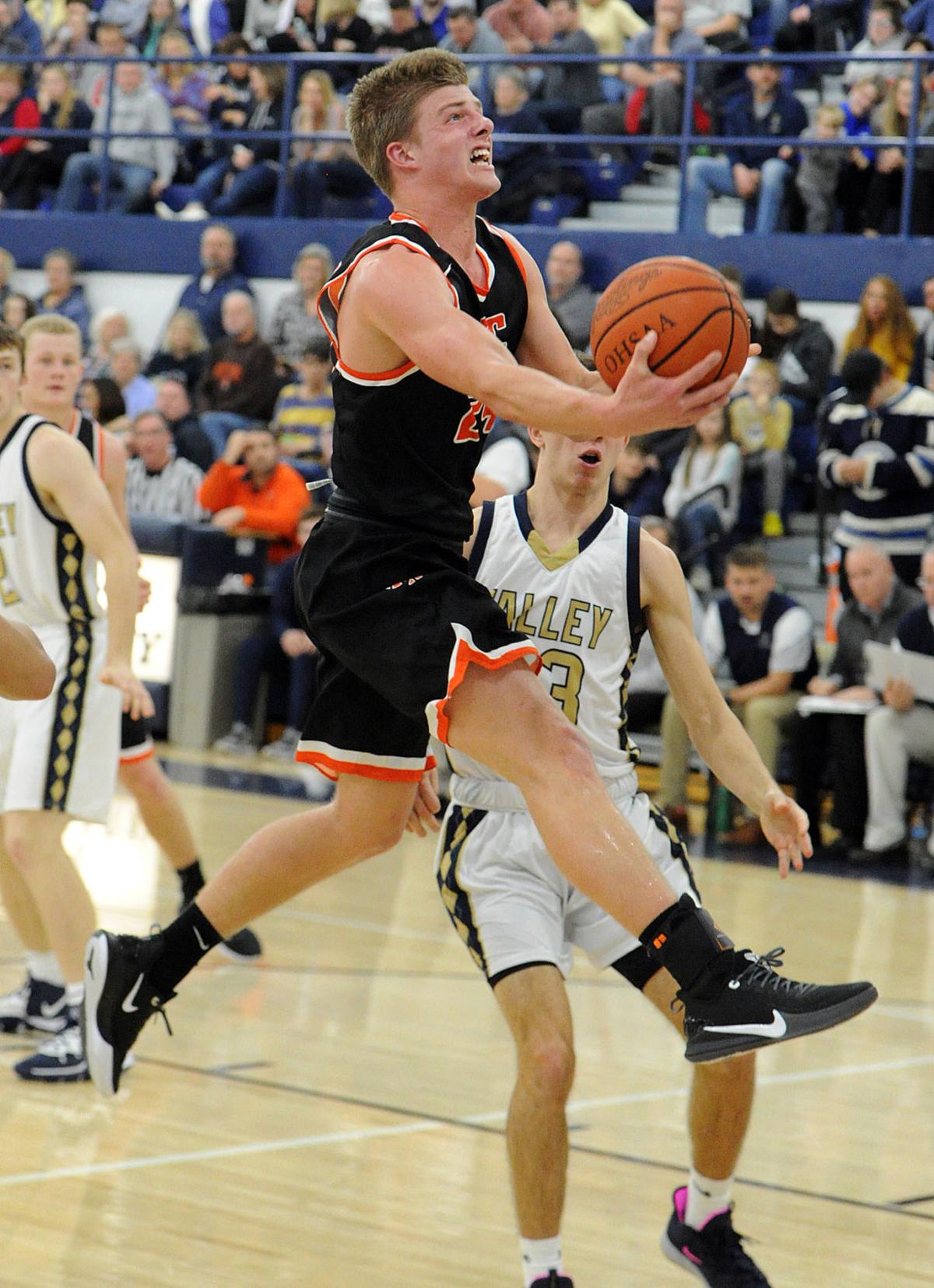 Amanda-Clearcreek’s Jayse Miller goes in for two of his 24 points to start the second quarter at Teays Valley. 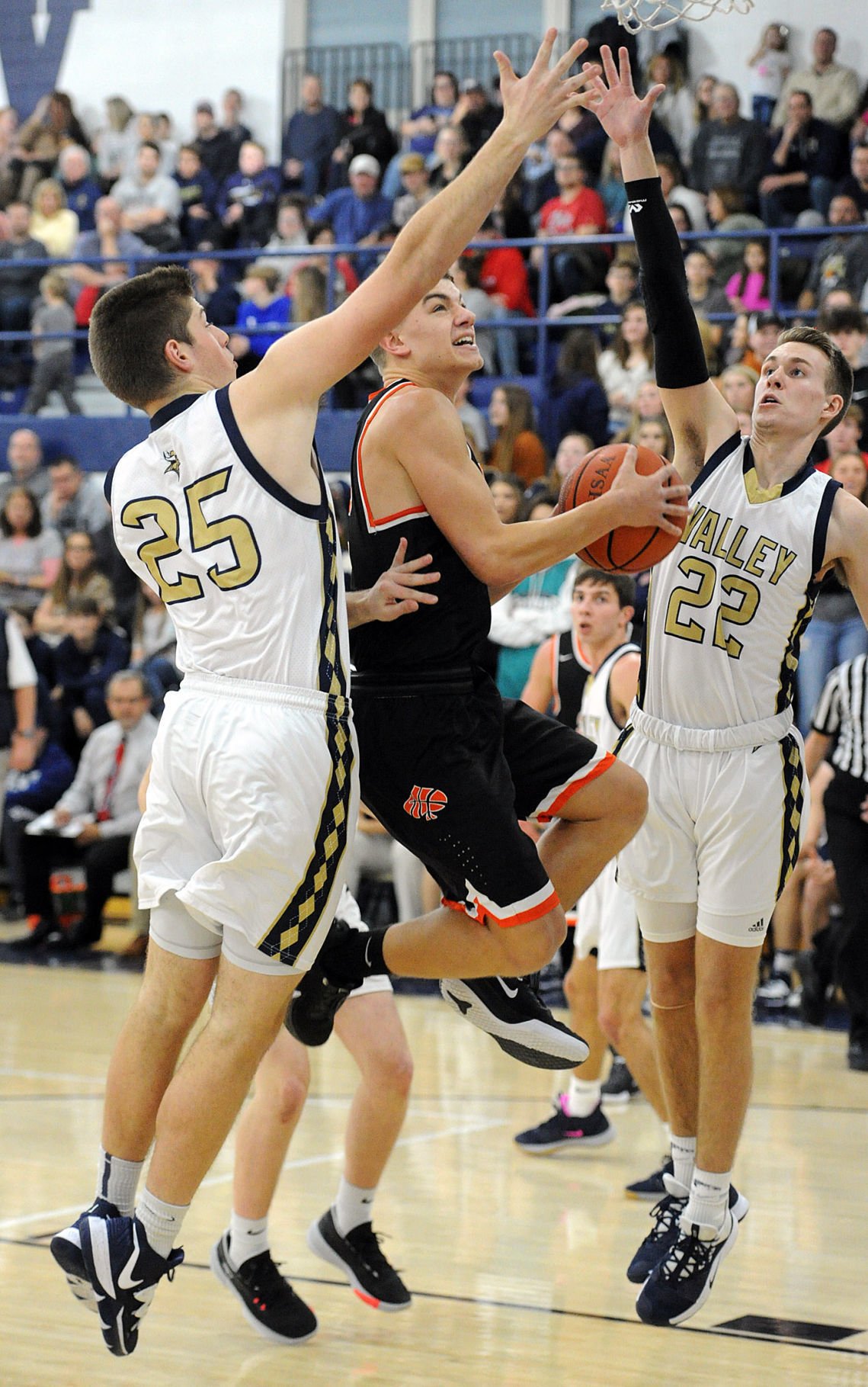 Amanda-Clearcreek’s Jayse Miller goes in for two of his 24 points to start the second quarter at Teays Valley.

ASHVILLE — Amanda-Clearcreek kept host Teays Valley’s high-scoring offense in check and converted at the free throw line down the stretch on Friday to post a 64-56 Mid-State League Buckeye Division win.

“Our goal was to hold them to like 40 or 45,” said A-C senior Jayse Miller. The Aces did hold TV well below it’s 70.5 points per game average. “That was our goal the whole game that if we held them way below their average, we had a really good chance of winning.”

The Aces started off well, getting out to a 17-8 lead early in the second quarter before the Vikings scored 15 straight to go up 23-17. Undaunted, the Aces closed out the half with five points from Jeff Bolin and three from Peyton Cassley to hold a 25-23 lead at the break.

“Last year we did the exact same thing. We got up like 12-nothing in the first quarter and then they went on a 20-to-something run,” Miller said. “I was like, ‘Not my senior year. I’m not letting it happen again.’

“We knew they were going to make a run,” A-C coach Jamie Justus said. “Our guys showed a lot of resolve in that situation to bounce back and get some key stops.”

Miller came through with 13 points in the third quarter, including scoring the Aces’ final nine points of the period from behind the three-point arc.

“During practice this week, I can tell you I was not feeling it. I was shooting bad,” Miller said. “It felt great coming out and hitting those.”

Miller’s scoring helped the Aces to a 44-37 lead entering the final quarter.

Even hitting 10 of 13 free throws in the period, the Aces never led by more than six points in the fourth quarter until the closing seconds.

“We could get to it, but we could never get over the hump,” TV coach Brian Barnett said. “We’d get it to one possession with the ball and then we’d shoot a shot that wasn’t the best shot and they’d go down and we’d have a defensive breakdown.”

It was a few other untimely miscues that Barnett cited for losing the lead before halftime.

“We called a timeout and made some adjustments,” he said of getting the second quarter run started. “We talked about quit shooting jump shots and getting it to the rim. That helped, along with our defensive pressure, and our defensive pressure caused all the layups. We made some adjustments here and there and then I think our last four possessions of the second quarter were turnover, turnover, missed shot, turnover. That’s tough to overcome.”

“Jayse is someone we want to get going more offensively. What I’ve been most impressed with this year is his vision on the court, as a point guard, is getting much better,” Justus said. “He’s opening things up for a lot of other guys. A lot of that starts with Jayse seeing the floor well and getting the ball down the floor. Tonight he was able to get his shot going. He started attacking a little more, which opens things up for the other players on our team.”

Trey Purdon led a balanced group of Vikings with 12 points while Camden Primmer had 11, Riely Weiss had 10, Eli Burgett nine and Clayton Knox had eight.

Purdon also pulled down 16 rebounds as part of a 44-30 advantage for the Vikings. TV had 21 offensive rebounds in the game but wasn’t always able to convert them to points.

“Our effort on the offensive glass was really good but we’ve got to be able to finish,” Barnett said. “

We worked on that the last two or three days before and after practice as far as finishing at the rim. Their strength and their bodying us up caused us a lot of issues.”

“They kind of hurt us with second chance shots. We come down and work hard on the defensive end but give up two, three, four looks,” Justus said. “A good team, and a well-coached team like that, is going to make you pay for it.”

Miller and Jesse Connell led the Aces with eight rebounds each.

Amanda-Clearcreek (6-4, 2-2) is back in action Tuesday hosting Logan Elm while the Vikings (3-4, 2-2) are in action tonight hosting Worthington Kilbourne.