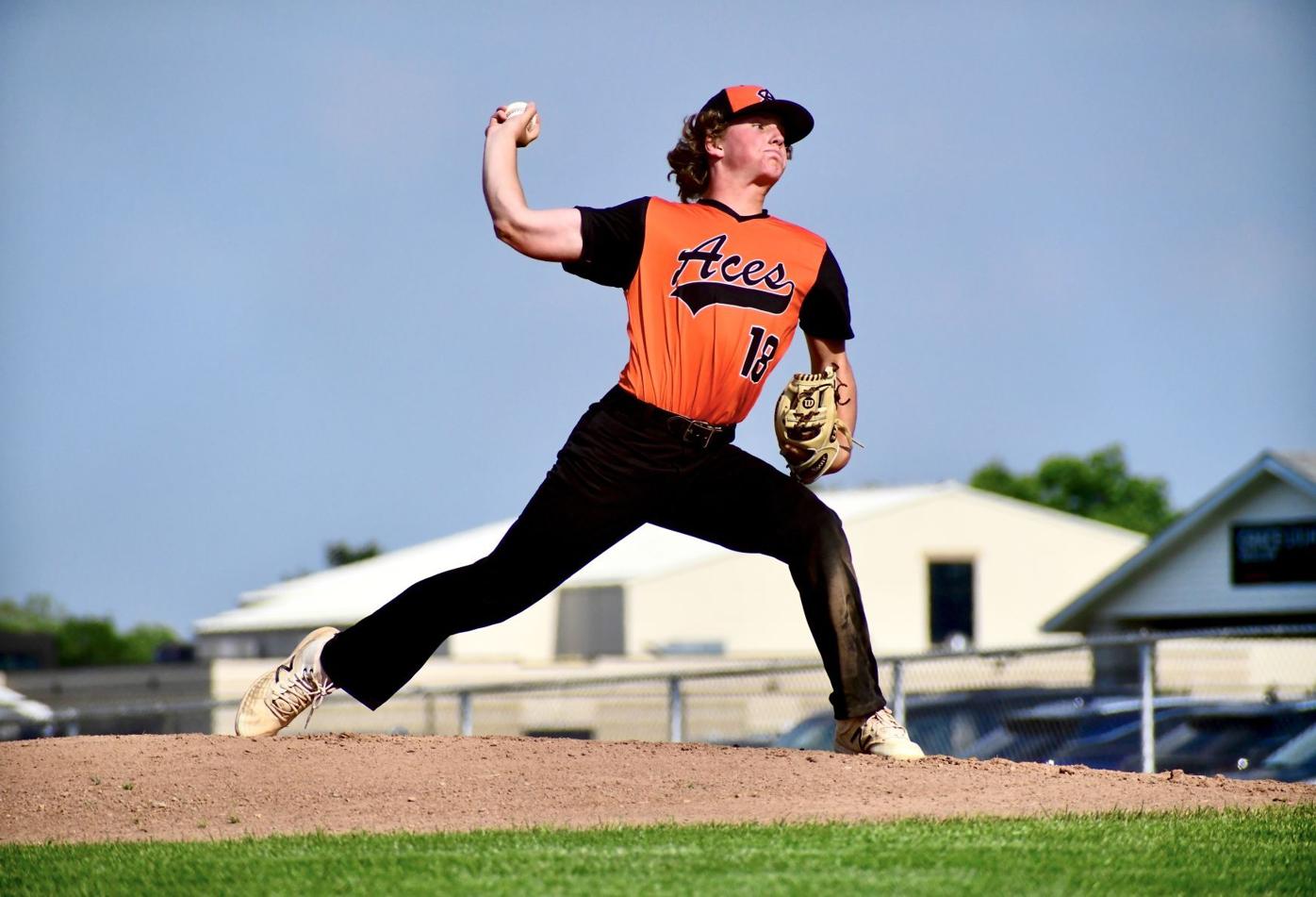 Aces’ No. 18 Trenton Hedges cranks a pitch to an opposing Warrior in the batter’s box. 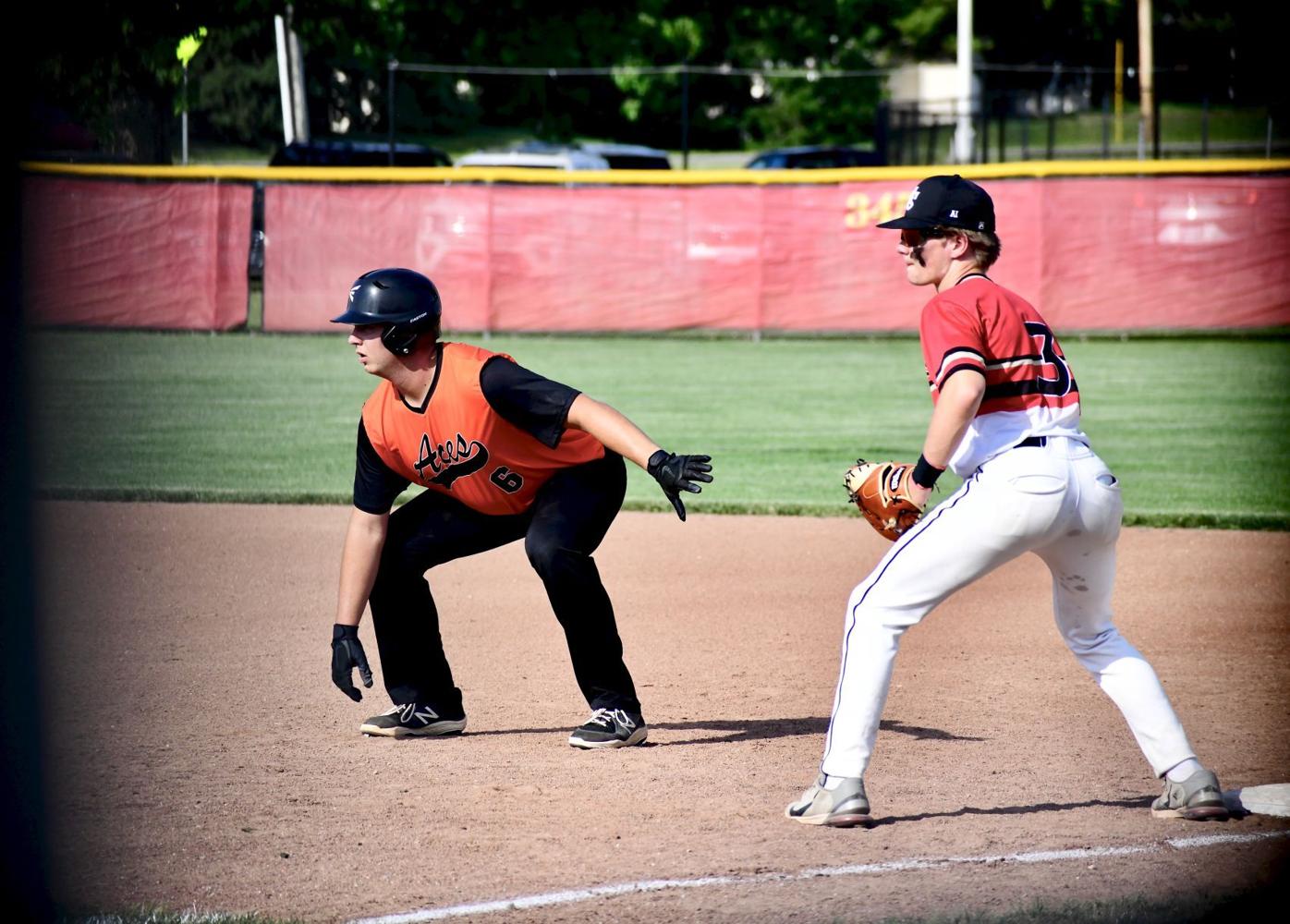 Aces’ No. 6 Anthony Buckley leads off first base; anticipating an opening to steal second. 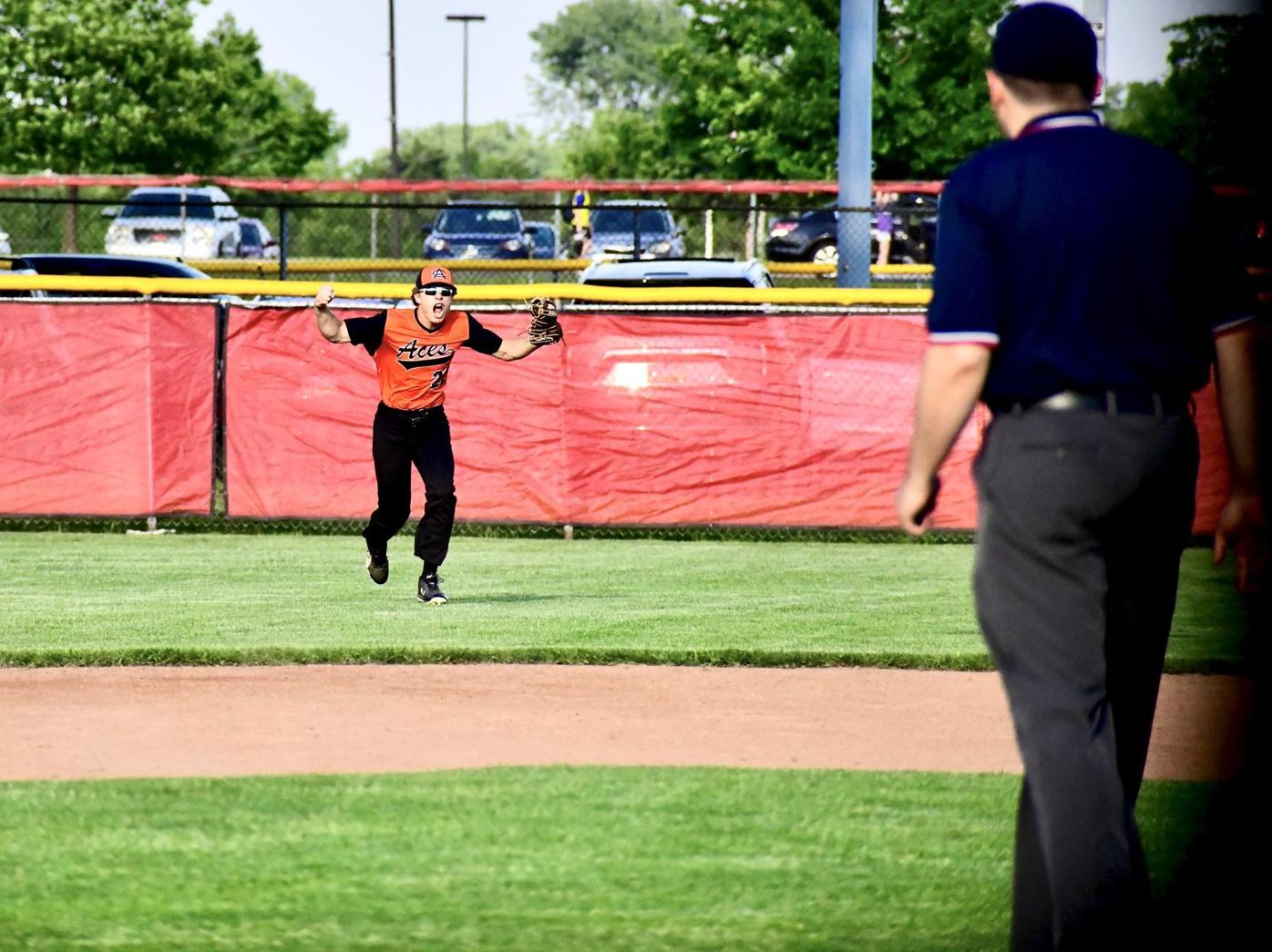 Aces’ No. 22 Hunter Matheny rejoices as he catches the last out of the ball game — winning the district semifinal. 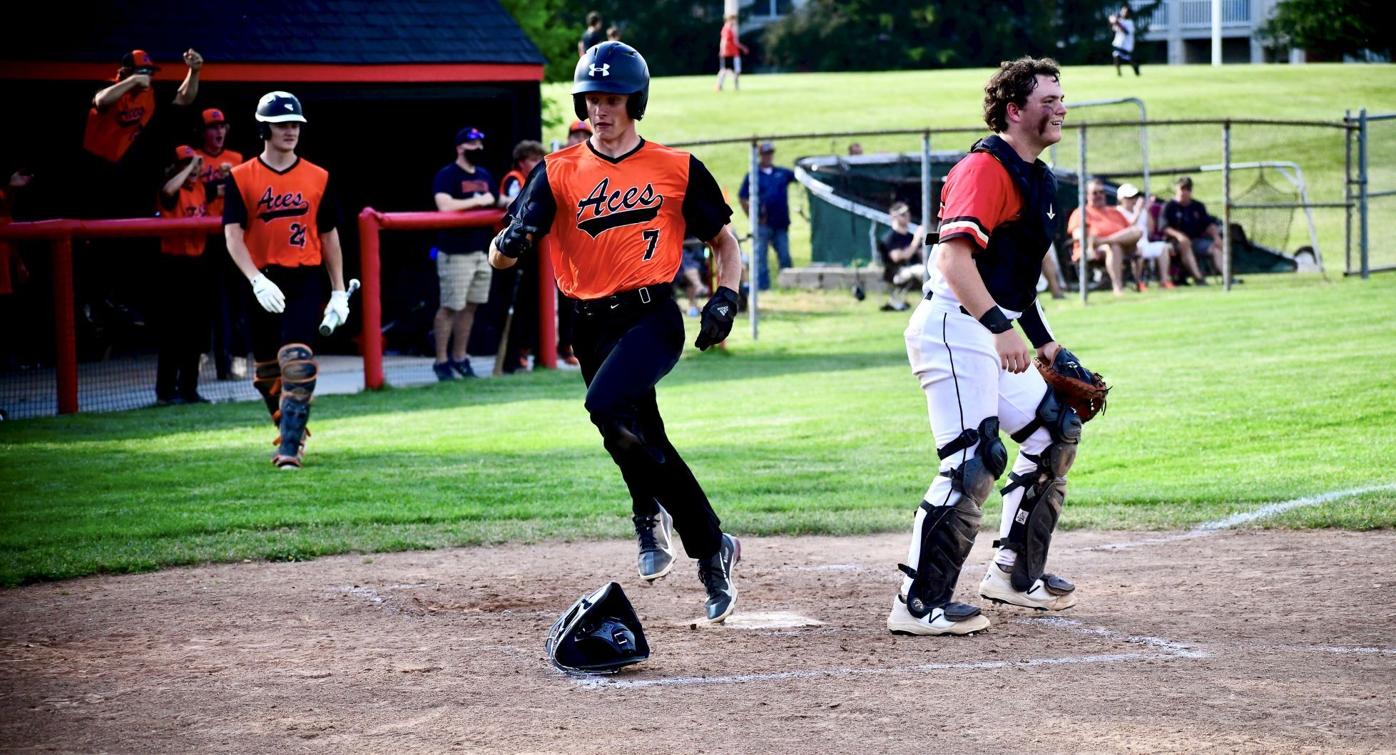 Aces’ No. 7 Grant Guiler runs in for the go-ahead score with his teammates cheering him in.

Aces’ No. 18 Trenton Hedges cranks a pitch to an opposing Warrior in the batter’s box.

Aces’ No. 6 Anthony Buckley leads off first base; anticipating an opening to steal second.

Aces’ No. 22 Hunter Matheny rejoices as he catches the last out of the ball game — winning the district semifinal.

Aces’ No. 7 Grant Guiler runs in for the go-ahead score with his teammates cheering him in.

WORTHINGTON — The Amanda-Clearcreek Aces duked it out against the Worthington Christian Warriors on Wednesday in a district-semifinal showdown. Like the old west, even the top dog is not safe as the Aces dealt a loss to the Warriors 1-0.

Heading into the Wednesday-evening matchup, the Warriors boasted a 21-3 record compared to the 12-14 overall record for the Aces. The Aces came into the Central Sectional and district tournament as the sixth seed — Warriors were seeded No. 1.

For the most part, the contest stayed consistent with both sides trying desperately to get runs on the board. Both dugouts could be heard chanting at the opposing pitcher on the hill along with young attendees trying perilously to get the best view of the game by climbing the backstop.

Things finally became interesting in the top of the fifth inning when No. 7 Grant Guiler sprinted his way to home on an RBI by No. 23 Peyton Cassley, putting the Aces ahead of the Warriors 1-0 — the away dugout breathing a slight sigh of relief as the job still was not completed.

After conducting on the hill for roughly over five innings, No. 18 Trenton Hedges was substituted for Cassley as the junior pitcher and third baseman was reaching the high end of his pitch count — now a fresh arm in the game.

The Warriors fans, as well as its player base, became rowdier with every player approaching the batter’s box, no matter the color. Cassley started to struggle in the strike zone in the bottom of the sixth inning. Aces’ No. 17 Ryan Chambers was then put on the hill after Cassley completed his duties.

In the bottom of the seventh inning, Chambers went on to record two strikeouts and two pop ups with the final one being caught by No. 22 Hunter Matheny — sealing in the win for the Aces with the final score 1-0.

The Aces rejoiced after taking down the No. 1 seeded Warriors. Like the days of Billy The Kid, no one is safe as the many brackets this season resemble the wild west as other top ranked teams met their surprising demise.

“Right now, I think I’m just happy we won with baseball game,” head baseball coach Travis Stone told The Circleville Herald, adding the win is the biggest since 1983 — the last time Amanda-Clearcreek won a district title. “This is where we wanted to be.”

The Aces were the clear underdog heading into the competition, but that did not seem to phase Stone and his talented deck of Aces who tried to give their best poker faces once things really started to heat up.

“I wasn’t really expecting this tight of a game,” Stone said. “I thought we’d put more runs on the board.”

Back in the top of the fifth inning, Stone recalled how Guiler, one of the fastest players on the team, stole second to give him less real estate to cover for a return home. Thanks to a bloop hit, Guiler was able to round third base to give the team their only run scored for the day.

“That’s the difference in a game,” Stone commented. “It’s not always the big hits… if you do (the little things) right, you win ball games.”

Losing on the mound for the Worthington Christian Warriors was No. 27 Ashton Fulkerson who allowed one run on nine hits, striking out four Aces and walking zero.

When asked if the job was finished, Stone replied “Oh, of course not.”

Now, the Aces are set to take on the Fredericktown Freddies this Thursday at 5 p.m. in Fredericktown for the Central District Division III championship.