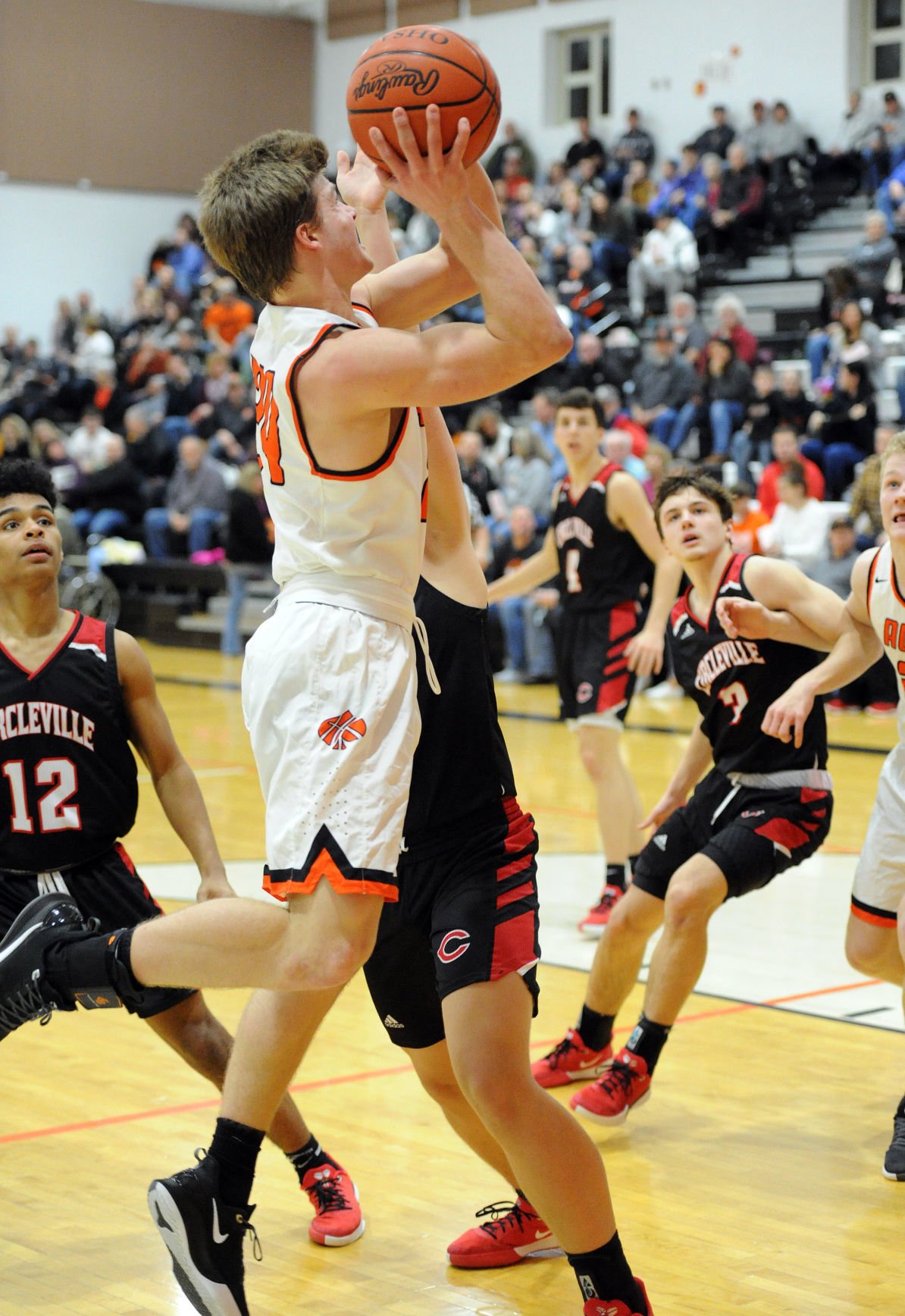 Amanda-Clearcreek’s Jayse Miller goes up for two of his nine points against Circleville Friday night. 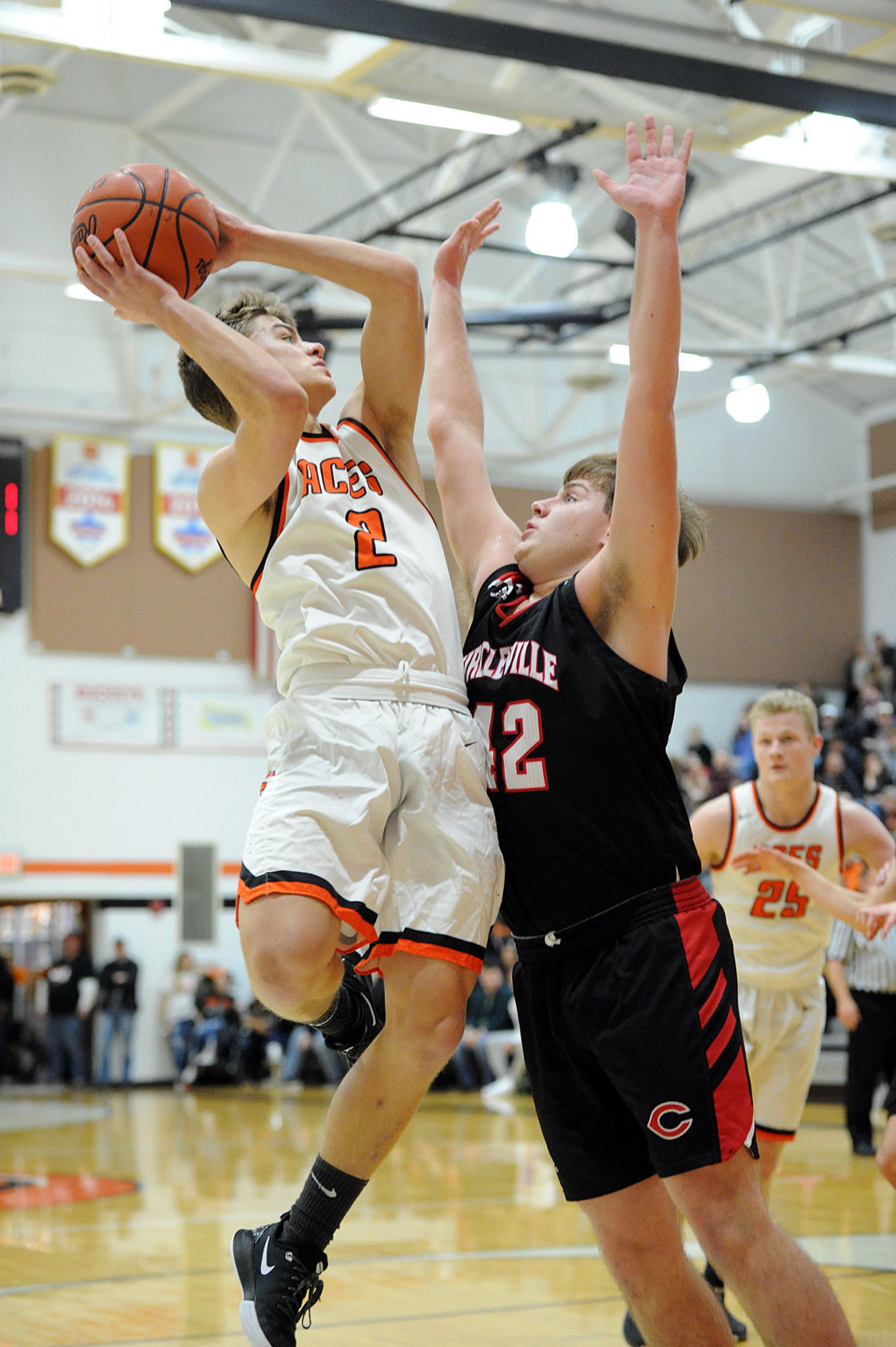 Amanda-Clearcreek’s Jayse Miller goes up for two of his nine points against Circleville Friday night.

AMANDA — Amanda-Clearcreek made the plays it needed to down the stretch to turn away visiting Circleville 31-26.

The Tigers were able to slow the Aces for most of the night in keeping Friday’s contest close and low scoring, but Amanda-Clearcreek forced a couple of late turnovers to clinch the win.

“Jeff Bolin, a senior, stepped up big. He was struggling with the offensive game and we kept preaching to him that we were going to need him to step up at some point and his deflection when they were trying to post him up was the turning point,” Amanda-Clearcreek coach Jamie Justus said. “That was the key that led to a transition bucket and that was a senior standing up and making a play when we needed it.”

Circleville grabbed a 26-25 lead on a pair of Evan Justice free throws midway through the fourth quarter and Amanda-Clearcreek regained the lead with three minutes left on a pair of Lane Steven free throws.

About 30 seconds later, the Aces forced a Tiger turnover and Peyton Madison turned it into an A-C layup on a play that set the tone for the end of the game.

“For three and a half quarters, we were disciplined. We played the scouting report,” Circleville coach Cody Carpenter said. “We wanted to slow it down and keep it a low-scoring game. We felt if we tried to play at their pace, they were better than us at that.

“I thought we did a nice job for three and a half quarters. We got down one there late in the game and made a couple of forced errors offensively and didn’t get back defensively one possession, then made a couple of bad fouls.”

Jayse Miller was the leading scorer in the game putting in nine for the Aces with Lane Stevens adding seven. Other than Stevens’ points, all of Amanda-Clearcreek’s scoring came from its five seniors (Madison, Miller, Bolin, Jesse Connell and Isaiah McQuade) during their last home game.

“I’ve gotten to see them grow up over the years, so it’s nice to see the young men they’ve grown up to be. They are a great group of kids and great leaders,” said Justus, who also coached them as seventh graders. “With a new coach, they bought in right away and that’s why we’ve had some of the success we’ve had this year.”

Fighting through for the win in their last couple of outings is something Justus hopes his team carried over to their tournament opener on the 25th at North Union.

“Even back to the Liberty Union game the other night, we jumped out to an early lead and lost it and were able to grind it out,” he said. “And then tonight, to be able to grind out a defensive battle like that heading into the tournament, it says a lot about the group of kids that we have.”

Circleville doesn’t have the luxury of prep time for its tournament opener as the Tigers are back at it Monday playing River Valley at Southeastern High School. Carpenter would like to see his group eliminate that one bad stretch that has haunted his team throughout the season.

“For the most part, we’ve played really good basketball with the exception of about a minute, two-minute, three-minute span in the game, regardless of where that was, that we give up a run and don’t know how to recover,” Carpenter said. “We have to get out of this.

Amanda-Clearcreek had a 30-23 rebounding edge in the game with Connell leading the Aces with eight. Gibson and Justice each had five for the Tigers.

• Amanda-Clearcreek’s JV team closed out its season with a 49-29 win over Circleville.

Clayton Rhyne led the Aces with 12 points, Tavin Miller had 11, Nate Hunter had 10, Cade Young had seven, Anthony Buckley had five and Connor Lafferty had four.

Kaleb Nungester and Ian Warden led Circleville with six points each, Nolan West had five, Andreas Loving had four, Parker Kidwell and Drew Moats each had three and Avery Ferrell had two.