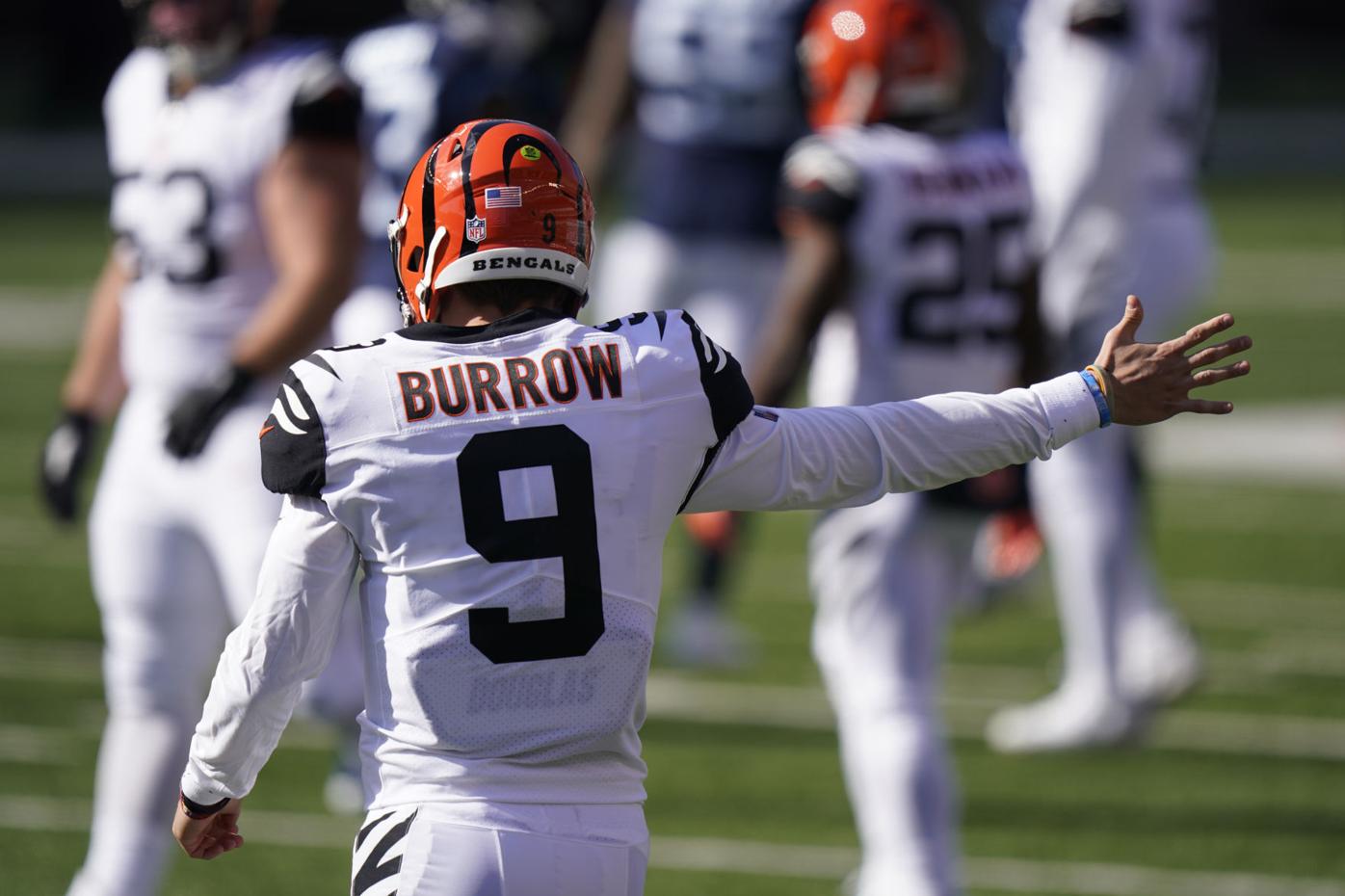 Cincinnati Bengals quarterback Joe Burrow (9) motions a first down during the first half of an NFL football game against the Tennessee Titans, Sunday, Nov. 1, 2020, in Cincinnati. 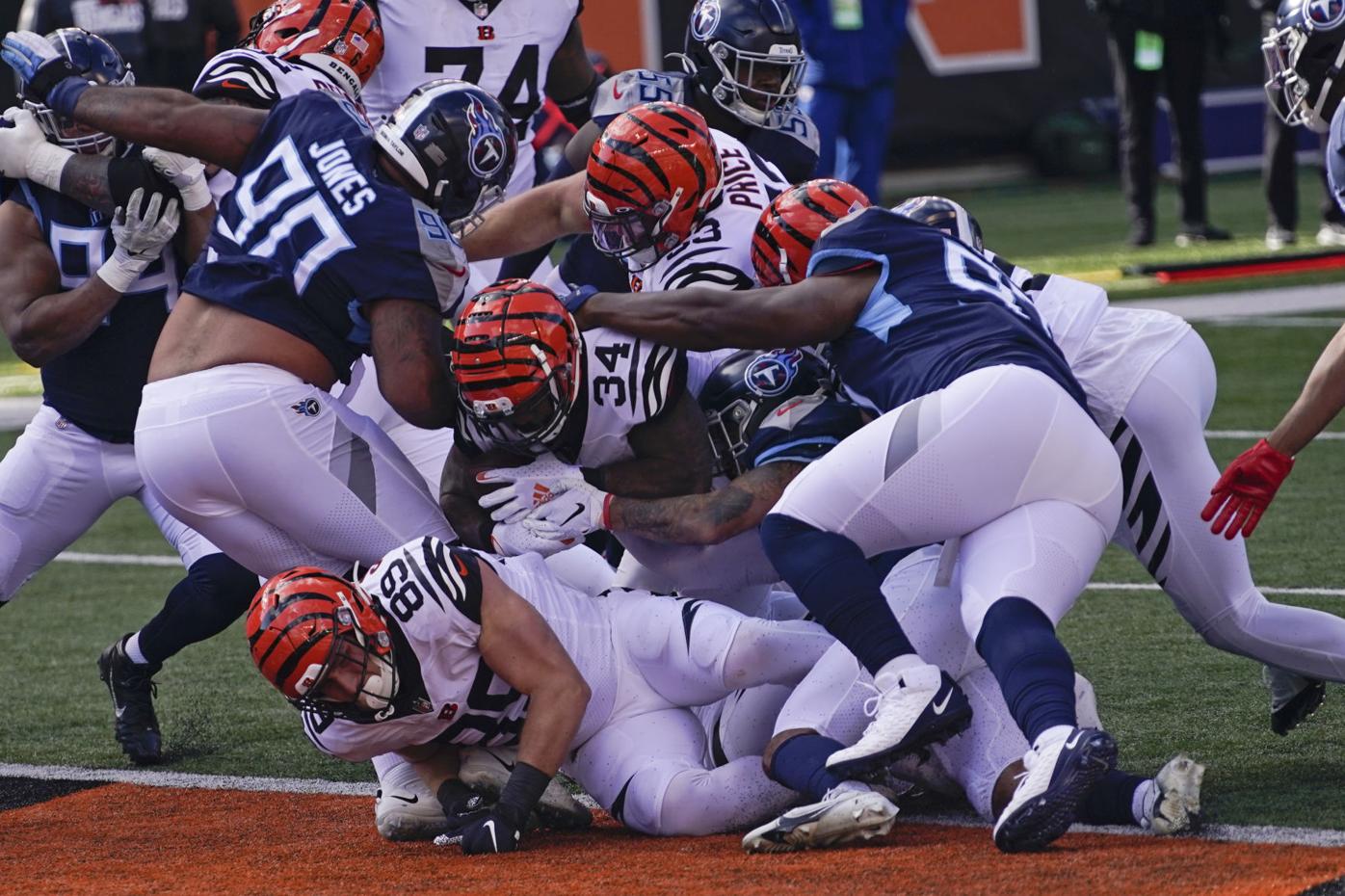 Cincinnati Bengals’ Samaje Perine (34) runs in for a touchdown during the first half of an NFL football game against the Tennessee Titans, Sunday, Nov. 1, 2020, in Cincinnati.

Cincinnati Bengals quarterback Joe Burrow (9) motions a first down during the first half of an NFL football game against the Tennessee Titans, Sunday, Nov. 1, 2020, in Cincinnati.

Cincinnati Bengals’ Samaje Perine (34) runs in for a touchdown during the first half of an NFL football game against the Tennessee Titans, Sunday, Nov. 1, 2020, in Cincinnati.

After watching Giovani Bernard and Samaje Perine run for early scores, Burrow threw two fourth-quarter TD passes and closed out the victory by leading a drive that used up most of the final six minutes to seal the Bengals’ 31-20 victory over Tennessee.

“We were talking about it all week in practice, we don’t feel like a 1-5-1 team,” Burrow said. “A couple of plays go our way over the last couple weeks, we could have been 6-2. This week we made those plays. It feels good.”

Just how close have they been?

Four losses came by eight or fewer points, the past two by a total of seven points — despite holding fourth-quarter leads.

It was a week for the Bengals in which one disgruntled player (defensive lineman Carlos Dunlap) was traded, another (wide receiver John Ross) expressed his unhappiness with his lack of playing time. And nearly half of the starting offense was sidelined by injuries. Because of that, few gave Cincinnati a chance of turning things around. But Burrow and the Bengals somehow found a winning combination.

Burrow was 26 of 37 with 249 yards, no turnovers and no sacks for the first time this season. The Bengals snapped a three-game losing streak, matched last season’s victory total and gave coach Zac Taylor his first win over an opponent with a winning record.

Tennessee (5-2), meanwhile, has lost two straight. sliding into a tie with Indianapolis for the AFC South lead as a five-game road winning streak ended.

The Titans struggled with their two biggest problems — third down and red zone defense — against the short-handed Bengals.

Burrow’s first TD pass of the game, a 7-yarder to Tyler Boyd, extended the margin to 24-7 with 13:55 remaining. When Ryan Tannehill hooked up with A.J. Brown on a 9-yard touchdown pass, it looked as if the Titans may rally for the victory.

Instead, Burrow threw a 6-yard TD pass to Bernard with 7:30 left.

“There’s a lot that goes into losing and certainly our ability to affect the quarterback would have been one of them,” Titans coach Mike Vrabel said. “Not getting off field on third down was another one. Not getting turnovers. Not taking advantage of all our opportunities in the red zone. There are a lot of things.”

Burrow wound up playing behind an offensive line that was almost completely revamped this week.

Rookie Hakeem Adeniji made his starting debut at left tackle and Shaq Calhoun went from the practice squad to starting left guard. Veteran Fred Johnson moved to right tackle and even Quinton Spain, who arrived in Cincinnati on Friday saw playing time.

Titans: Tannehill was 18 of 30 with 233 yards, two TDs and one interception. ... Henry, the NFL’s defending rushing champ, had 18 carries for 112 yards. It’s the first time Tennessee has lost when Henry ran for at least 100 yards. ... Corey Davis had 10 catches for 128 yards and one TD. ... Brown has scored in four consecutive games. ... The Titans started Sunday with a league-high plus-9 in turnover margin but had no takeaways against the Bengals.

Titans: Receiver Adam Humphries was carted off the field in the final minute of the first half after taking a scary hit to the head. He was diagnosed with a concussion and did not return. Punter Brett Kern appeared to get hurt on the final extra point attempt when a bad snap forced him to throw a pass.

Bengals: Cincinnati lost cornerback Darius Phillips with a left groin injury on Henry’s 3-yard TD run in the first half.

Bengals: Will try to carry the momentum through a much-needed bye week.