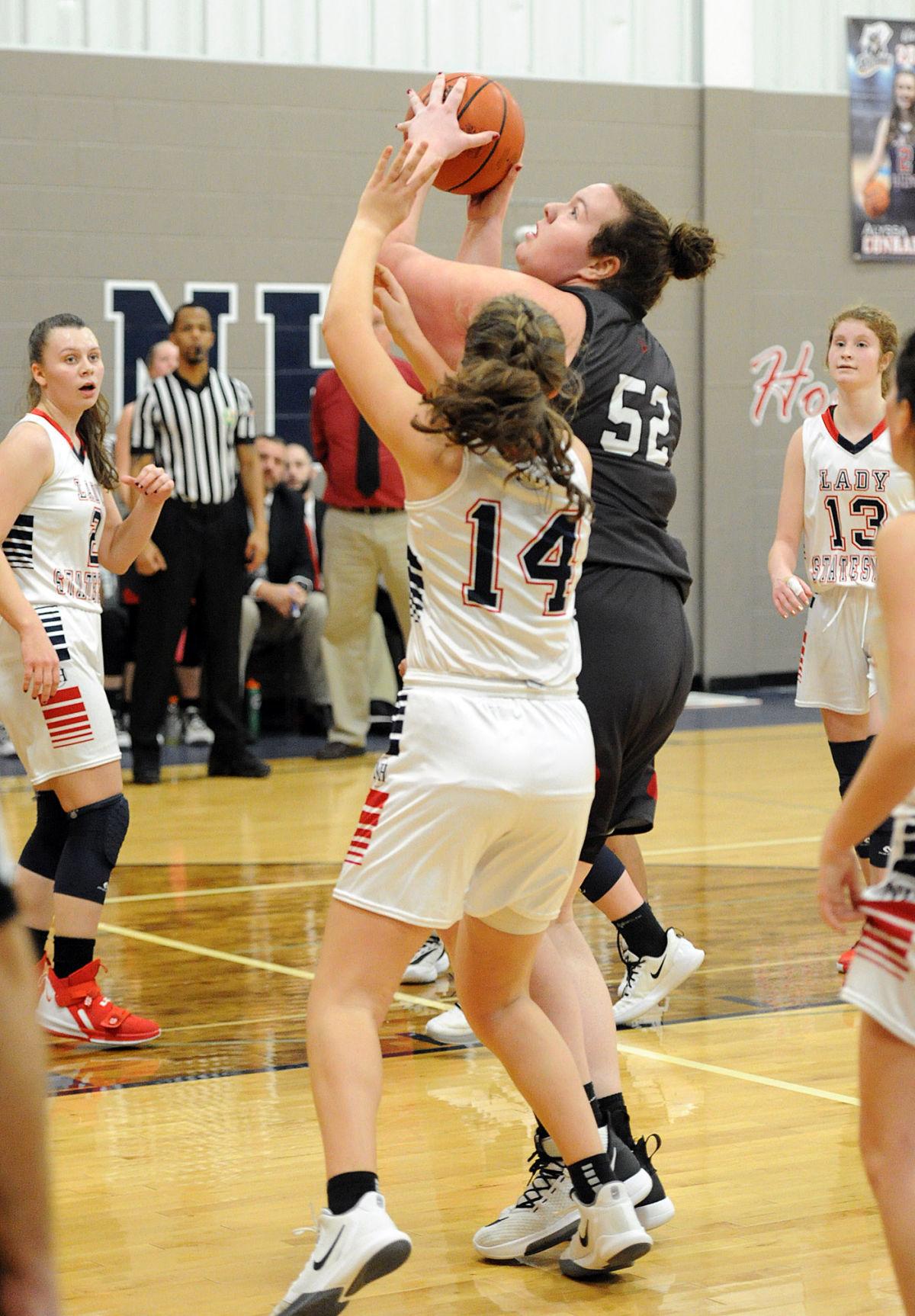 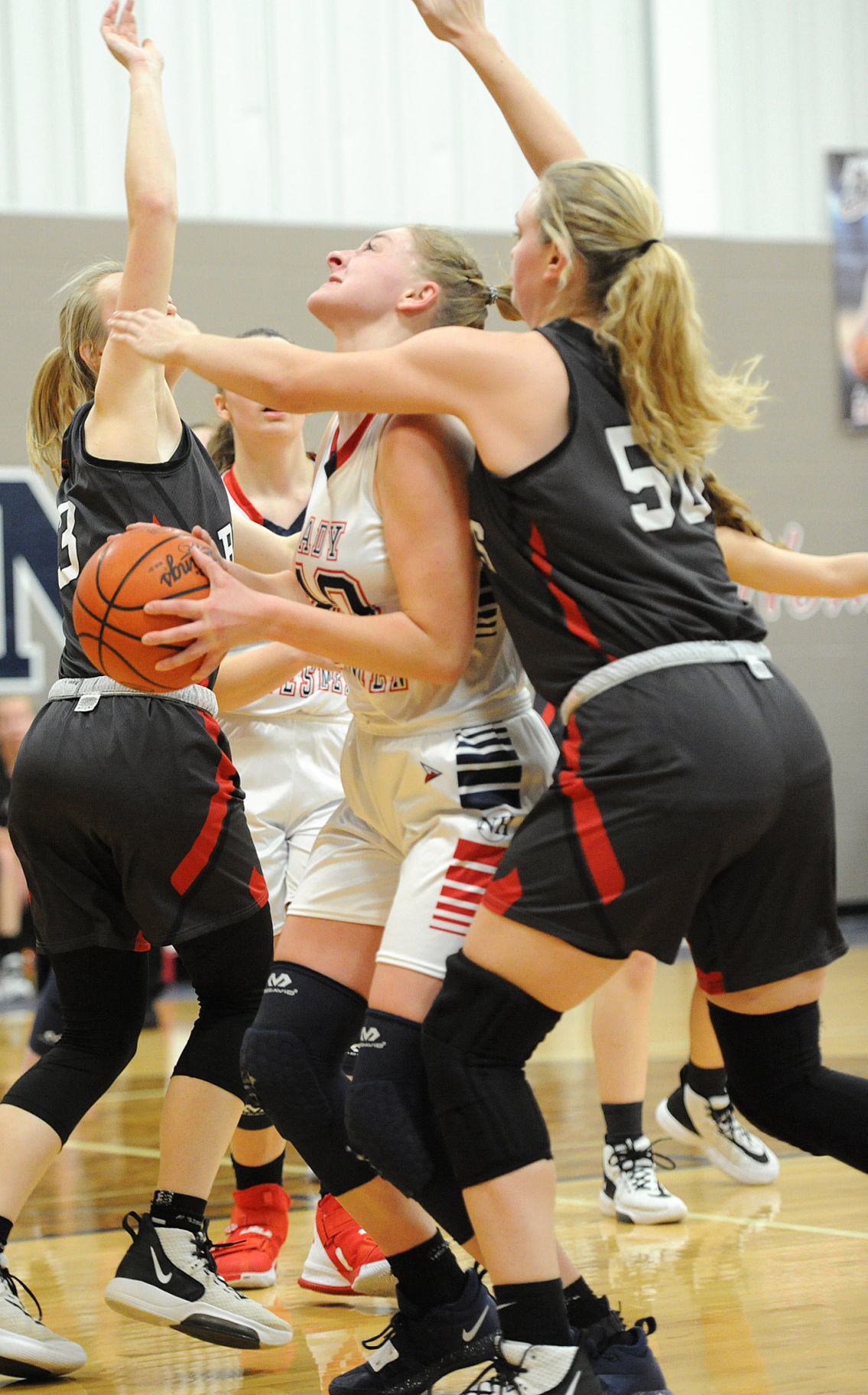 New Hope’s Sadie Pruitt is fouled as she tries to convert an offensive rebound into points against Logan Elm.

New Hope’s Sadie Pruitt is fouled as she tries to convert an offensive rebound into points against Logan Elm.

The game was tied twice in the opening minutes of the game before the Braves scored on a three-pointer from Megan Diehl, a free throw from Abby Hatter and a basket from Brynn Griffith to make it 10-4. After that, the Statesmen (6-4) were never closer than three points.

“We did what we had to do. Monday is tough,” Logan Elm coach John Denen said. “We don’t practice well on Mondays so I knew that was going to be tough.”

The Braves scored 11 straight in the middle of the fourth period to take their largest lead of the night at 58-37.

“We couldn’t close the gap. That’s part of the learning process,” New Hope coach Brian McCallister said. “We’ve got to learn how to get the ball to our scorers when they take our scorers away. We can’t just rely on Maren taking it one-on-one.

“Jenna Tripp and Rebecca Highfield are great shooters and I don’t know that they made one tonight at all. (Tripp sank one three-pointer.) We’ve got to get them on track.”

With this being the first-ever meeting between the two squads, the Braves weren’t sure what to expect from the Statesmen, especially since the night they came to scout the game was canceled. Denen said they won’t let that happen before the two meet up next season at LE. He also added that he thought New Hope would make a nice addition to the Mid-State League Cardinal division.

“New Hope Christian Academy should come to the Mid-State League on the small school side. They’re a year away from competing in that conference,” Denen said. “It was a privilege to come out and play. I hope they get in the Ohio High School Athletic Association soon — that might help them get into the Mid-State League.”

McCallister said the matchup was a good experience for his squad as they have several other experienced squads remaining on their schedule.

“I’m thrilled Logan Elm came in and played us. They probably didn’t have a whole lot to gain by playing us,” he said. “We’re pretty young and I’m happy with how we competed.

“Going from here it doesn’t get any easier,” he added. “We’ve got to go to Amanda, go to Westfall, to Independence – we’ve got to grow up pretty quick.”

Logan Elm forced the Statesmen into 23 turnovers Monday while limiting their own to 11.

New Hope did end the night winning the rebounding battle 37-30. Alyssa Conrad led NH with nine and Sadie Pruit had eight to go along with her 10 points. Karlee Thomas led LE with six rebounds while Griffith had five.

Monday was the last game for Logan Elm’s Vikki Baincotti as the exchange student heads back to Argentina later this week.

“She’s been a blessing to our kids and I think she would say the same thing,” Denen said. “We’re going to miss Vikki.”

Logan Elm is back in action Friday night at Teays Valley. New Hope is next in action Saturday hosting Horizon Science Academy.