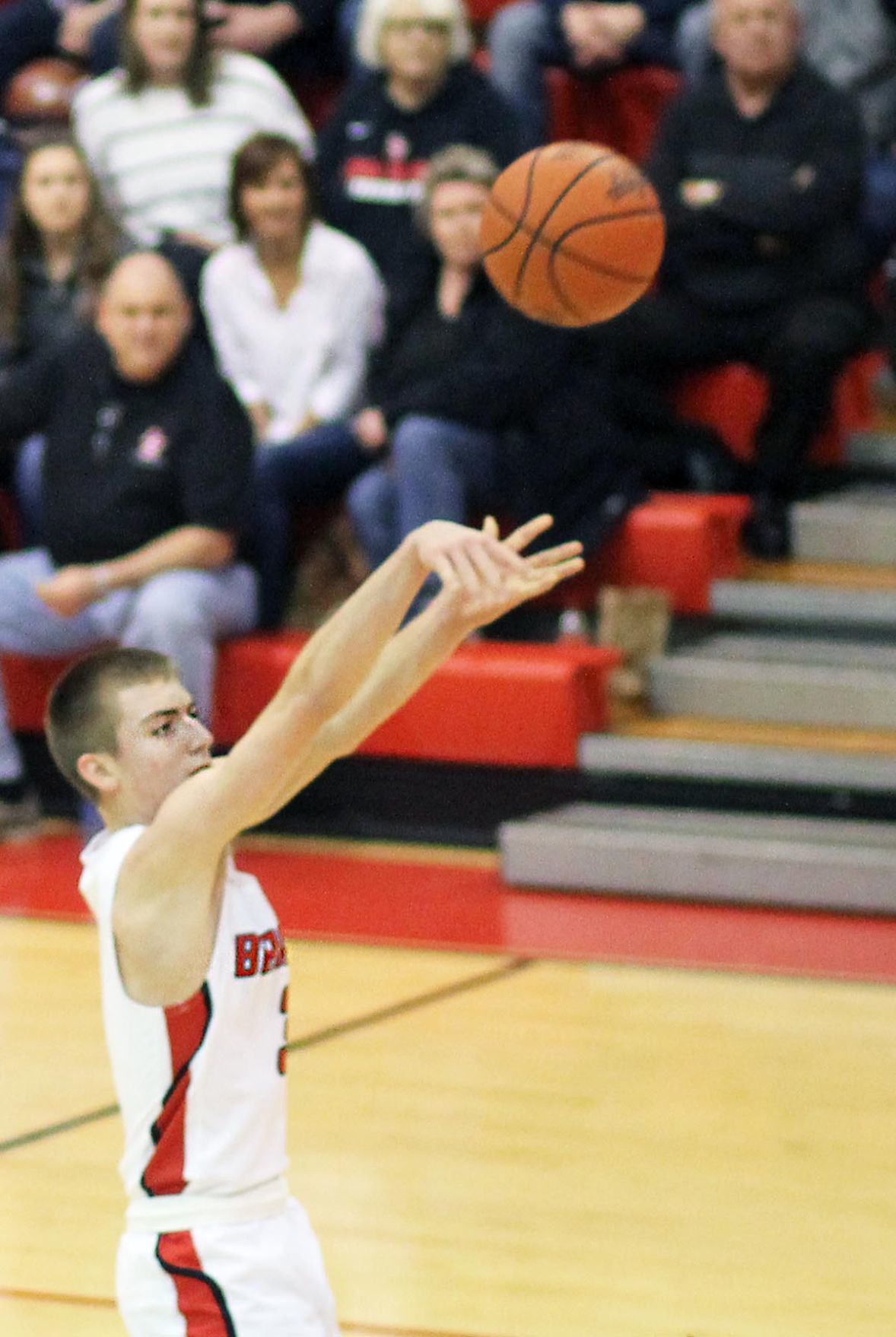 Logan Elm’s Luke Baldwin drains a three-pointer during the second quarter on Friday against Liberty Union. 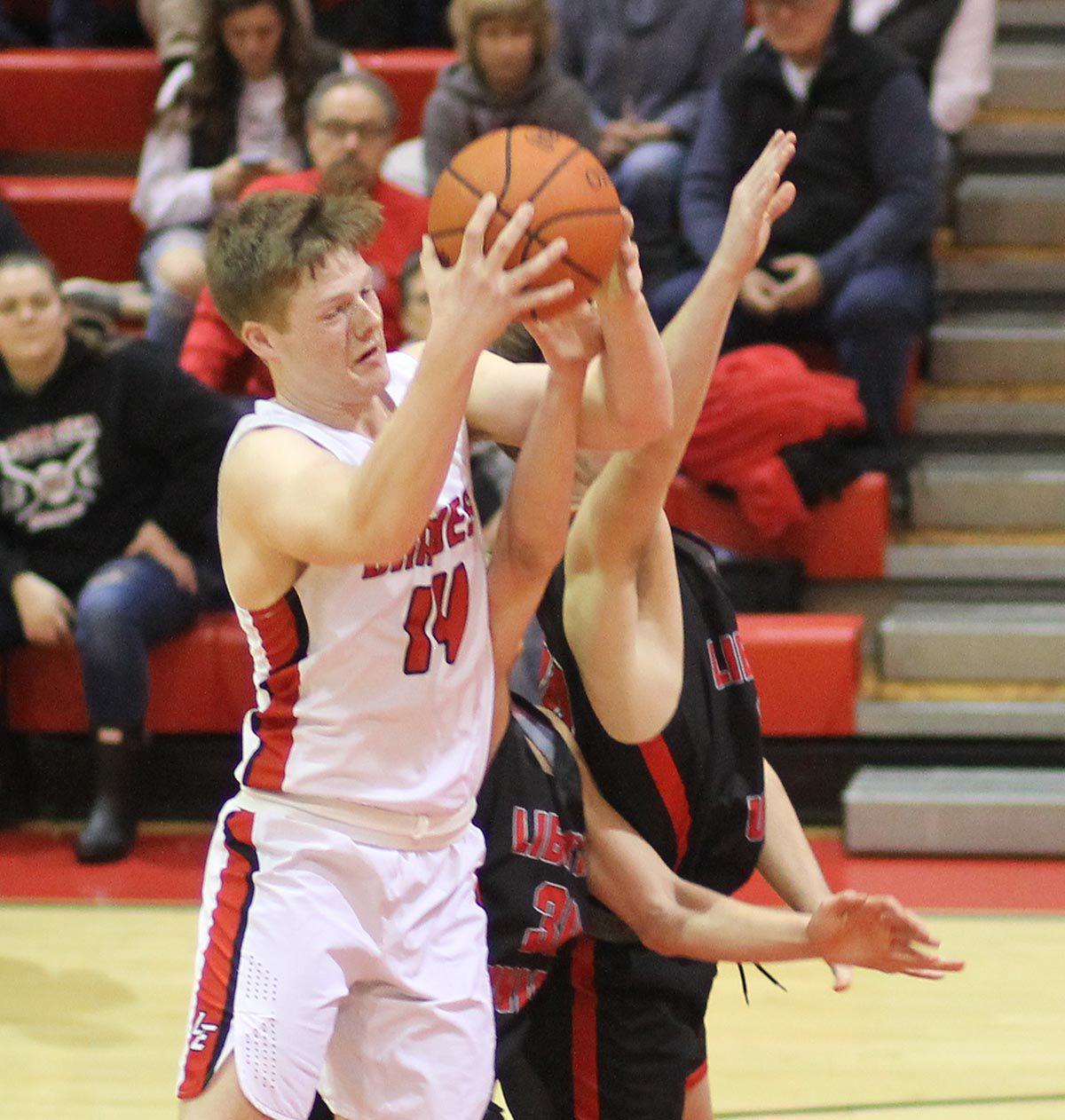 Logan Elm’s Luke Baldwin drains a three-pointer during the second quarter on Friday against Liberty Union.

On the coldest night of the winter, Logan Elm was almost equally as cold shooting the basketball on Friday in a 53-48 Mid-State League Buckeye Division loss to visiting Liberty Union.

It was the second consecutive subpar outing for the Braves at the charity stripe after connecting on only 4 of 10 (40 percent) tries earlier in the week against Circleville.

“Liberty Union did a nice job of mixing its defense and the length they have was also a factor and gave us some difficulty at trying to get the ball to the basket at different times,” Logan Elm coach Doug Stiverson said. “We’ve shot free throws well for the first 20 games and we entered the game tonight with a 78 percent percentage. We know we can hit free throws, we just have to be confident and knock them down.”

The Lions took a 37-32 lead with 2:08 left in the third quarter on a jumper by Jared Ison, but the Braves battled back by scoring eight of the last 10 points of the period. A three-pointer by Jeremy Wietelmann started the mini run that was followed by a steal and layup courtesy of Luke Baldwin and an old-fashioned three-point play by Jason Sailor, sending the Braves into the fourth quarter with a 40-39 lead.

A three-pointer from the left wing by Isaac Ward gave the Braves a 43-39 advantage with 30 seconds off the fourth quarter clock, but the Lions (8-14, 3-11) responded with back-to-back triples from Carson Warner to regain the lead.

Logan Elm tied the game at 45-45 on a coast-to-coast drive to the basket from Gabe Chafin that was quickly countered by the Lions retaking the lead for good at 47-45, following two free throws by Jacob Denny with 2:52 remaining.

The Lions then went ahead 49-46 after a jumper by Jared Ison.

Logan Elm cut its deficit down to 49-48 following a layup from Chalfin, who dove on the floor on the ensuing possession to grab a loose basketball and was able to call timeout with 45.7 seconds left.

The Braves were then fouled, but failed to convert a one-and-one opportunity at the free throw line.

“We weren’t very sharp shooting the basketball, but our guys continued to play hard and they gave us a chance to win in the last minute,” Stiverson said. “I don’t think that would have been the case if we played this game early in the season.”

Liberty Union put away the win by hitting four of five free throws — two each by Ison and Jacob Berlekamp. Logan Elm’s final two threes missed the mark, with Berlekamp coming down with both rebounds.

“Warner made some huge threes for Liberty Union and they did a nice job of playing under control on offense and executing,” Stiverson said.

Baldwin and Chalfin led the Braves with 11 points apiece, with Chalfin also controlling 10 rebounds. Sailor had 10 points and eight rebounds, and Wietelmann dished out five assists to go with his six points.

The Braves honored their three seniors — Baldwin, Jared Harrington and Tyler Baer — by starting all three in their final home game.

“Luke, Jared and Tyler are three great seniors and it was nice to start them and honor their contributions to our program,” Stiverson said. “Luke played with confidence and shot the ball well and then Jared and Tyler both helped us get some rebounds against Liberty Union’s length.”

Logan Elm (15-7, 9-5), which finished third in the league this season, opens tournament play on Wednesday against Miami Trace (12-9) inside Southeastern High School. Tip-off is slated for 8 p.m. The Braves defeated the Panthers 50-44 last month.

• The Braves wrapped up an outright league championship with a 50-25 win over the Lions in the reserve game.