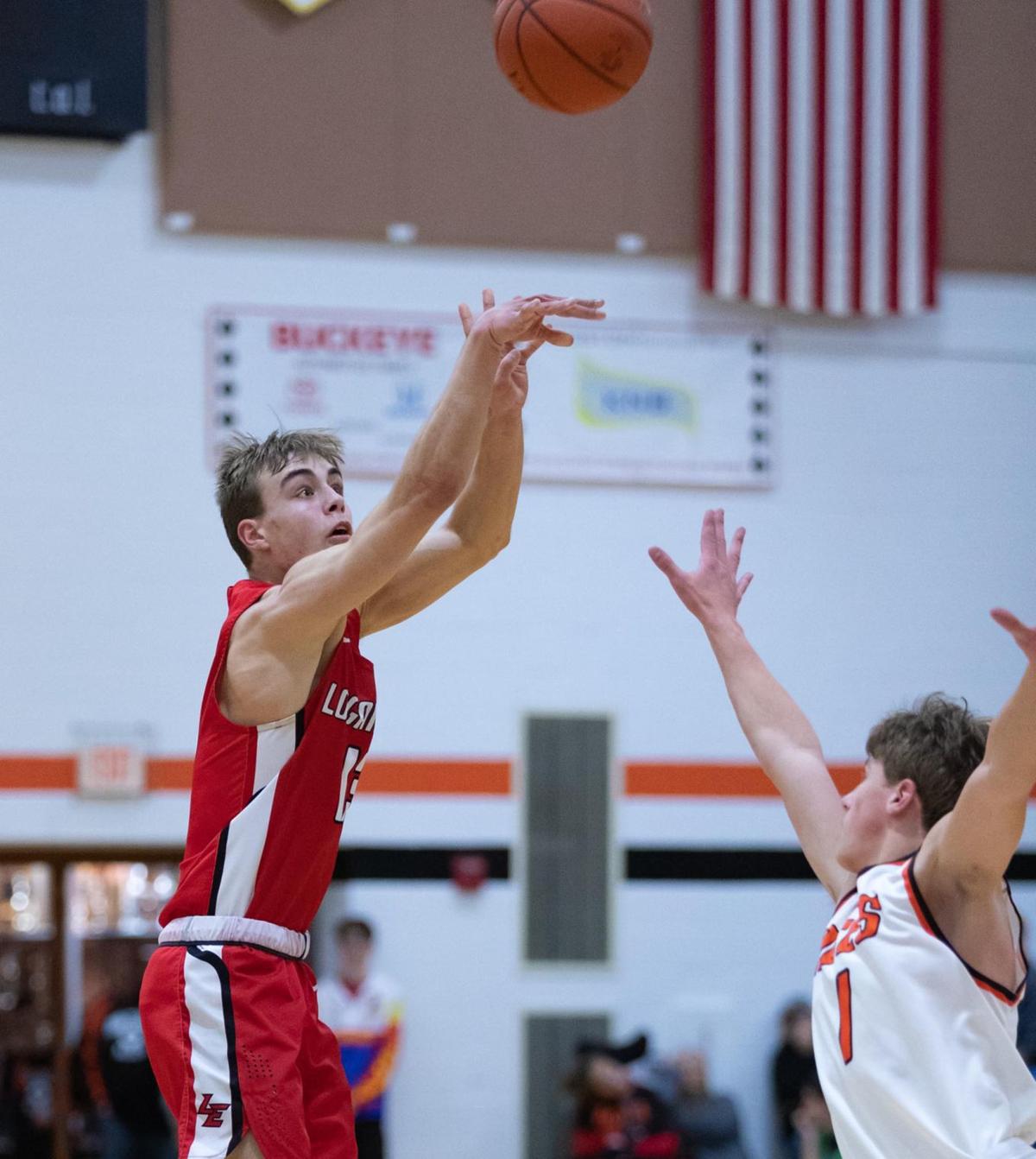 Logan Elm’s Gabe Chalfin drains a three to beat the buzzer on his way to a game-high 25 points on Tuesday in a win over Amanda-Clearcreek.

Amanda-Clearcreek’s Jesse Connell drops in two of his seven points.

Logan Elm’s Gabe Chalfin drains a three to beat the buzzer on his way to a game-high 25 points on Tuesday in a win over Amanda-Clearcreek.

Amanda-Clearcreek’s Jesse Connell drops in two of his seven points.

Logan Elm turned around a halftime deficit with a 20-point outburst in the third quarter on Tuesday on its way to a 53-44 Mid-State League Buckeye Division win over host Amanda-Clearcreek.

The Braves entered the second half trailing 27-23, but turned the scoreboard around with a 20-10 period with four players taking part in scoring. Logan Elm shot 9 of 14 (64.3 percent) for the period, led by Gabe Chalfin hitting four of those shots and contributing nine points.

“Gabe was extremely active on both ends of the floor and he got us going in the third quarter,” Logan Elm coach Doug Stiverson said. “He came away with some steals on the defensive end to get us into transition and then he also got to the basket and scored some easy ones.”

The Braves took a 43-37 lead into the fourth quarter and tacked on three more points to their advantage in the period, led by Isaac Ward draining a pair of three-pointers.

After allowing the Aces six field goals in the first quarter, the Braves checked their hosts to eight over the final 24 minutes.

“We weren’t as active away from the basketball as we needed to be in the first half and especially that first quarter,” Stiverson said. “We picked up our helpside defense, got some deflections and made things tougher on Amanda in the second half by being more active.”

Chalfin paced all scorers with 25 points on 8 of 17 (47.1 percent) shooting, Ward followed with 15, Jason Sailor tossed in six and Jeremy Wietelmann added five.

Bloom-Carroll opened a MSL-Buckeye game on a 23-2 run on its way to a 63-39 win on Tuesday over visiting Teays Valley.

“We did not shoot the ball very well tonight as we were 11 of 45 from the field,” Teays Valley coach Brian Barnett said. “Bloom-Carroll did a good job of taking away our penetration and kept us off the offensive glass.”

The Vikings trailed 30-15 at halftime and 49-20 entering the final period.

“Our kids battled hard in the second quarter to cut our deficit going into halftime,” Barnett said. “Even down 15 at half, I still felt we had a great chance to make a third quarter run. Bloom-Carroll really played some solid defense in the third quarter and also converted on their end.”

“Garrett had a great game on both ends of the floor for us — he continues to shoot the ball well and his defensive toughness was really good,” Barnett said. “Garrett does a great job of moving without the ball to the open areas and he has a quick release. He is playing some really great basketball.”

The Vikings (3-6, 2-3) continue league play on Saturday at Hamilton Township.

Circleville was unable to rebound from an early deficit on Tuesday in a 77-53 MSL-Buckeye loss to host Liberty Union.

Evan Justice had 17 points and Riley Gibson added 10 for the Tigers.

Westfall held off visiting New Hope on Tuesday for a 64-61 non-conference win.

Jay Wyman led the way with 16 points, Hayden Lemaster had 12 and Casey Cline added nine for the Mustangs.

Tyler Cavanaugh and Simon McAllister each scored 19 points and Donovan Geddis added 11 for the Statesmen.

The Statesmen (6-4) return home to entertain Fisher Catholic on Thursday, while the Mustangs (6-6) resume Scioto Valley Conference play on Friday when they host Unioto.

Amanda-Clearcreek used a strong first half on Tuesday to record a 59-49 non-league win over host Fairfield Christian.

The Aces opened the game on an 18-6 run, powered by Stephanie Bowers scoring eight points and Kate Connell adding four.

Amanda-Clearcreek extended its advantage to 39-20 at the break, paced by Anna Johnson scoring all seven of her points, and Kilynn Guiler and Gracie Hyme adding five apiece.

Connell paced a balanced scoring sheet for the Aces with 14 points, Guiler followed with 12, and Hyme and Bowers dropped in 10 apiece.

The Aces (10-3) resume league play on Friday at Bloom-Carroll.

Allison Basye dropped in a game-high 30 points on Tuesday to send Huntington to a 49-37 Scioto Valley Conference win over visiting Westfall.

Gabby Patete had 20 points to pace the Mustangs (4-7, 2-4), who host Piketon on Thursday for a conference game.