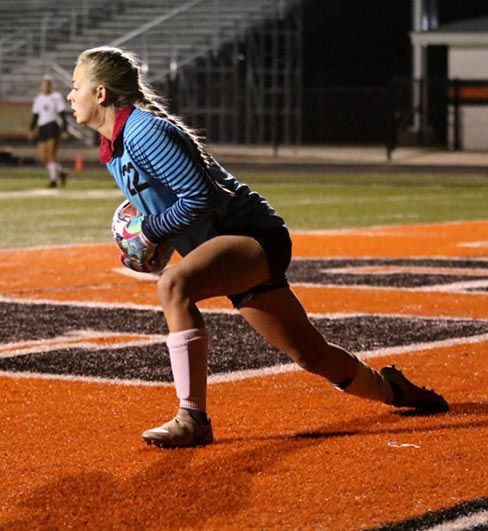 Westfall’s Marcy Dudgeon made 14 saves on Tuesday in a district semifinal match. 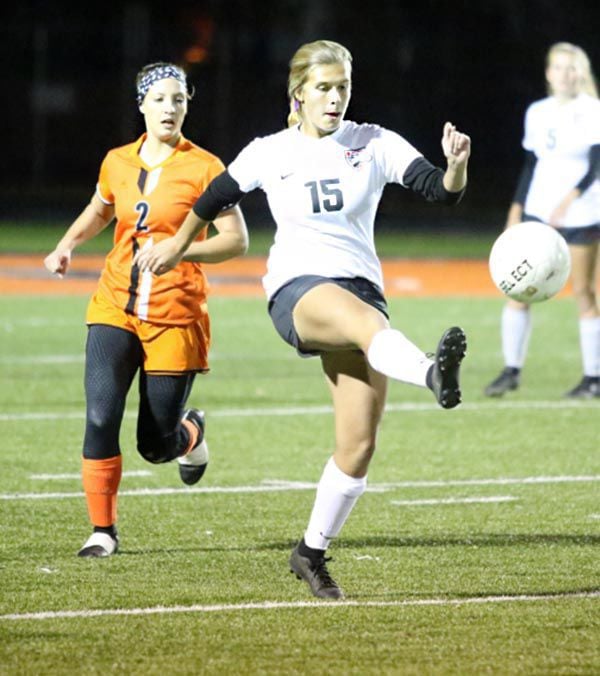 Westfall’s Carmen Walters sends a pass down field against Wheelersburg. 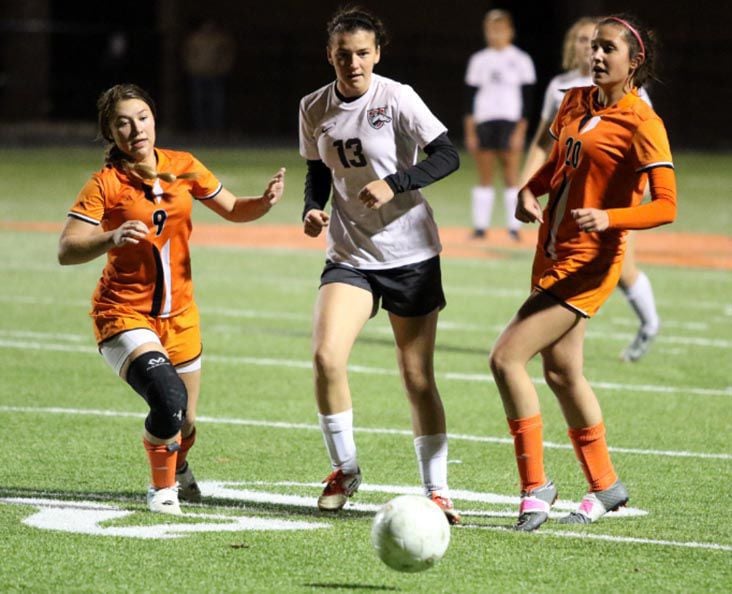 Westfall’s Mahaley Farmer makes a pass to a teammate between a pair of Wheelersburg defenders.

Westfall’s Marcy Dudgeon made 14 saves on Tuesday in a district semifinal match.

Westfall’s Carmen Walters sends a pass down field against Wheelersburg.

Westfall’s Mahaley Farmer makes a pass to a teammate between a pair of Wheelersburg defenders.

WAVERLY — Westfall’s Marcy Dudgeon did everything she could Tuesday evening … and then some.

In a Division III Southeast District semifinal against Wheelersburg at Waverly High School, the junior goalkeeper was tested time and time again. The Pirates continuously pelted her with shot attempts and she stared down the barrel and stifled their attack on almost every occasion.

But despite Dudgeon’s heroic efforts, the Mustangs (7-9-1) couldn’t find a rhythm offensively, eventually falling to the Pirates by a 1-0 season-ending final.

Dudgeon ended the night with 14 saves on 18 shots attempts. One found the back of the net, two sailed wide right and one hit the crossbar.

“I think I did pretty well, along with my teammates,” Dudgeon said. “I definitely couldn’t have done it without them. There would have been a lot more shots on goal without them. When I’m playing goalie and looking for shots to save, I just look for balls I can get to.”

If Thursday’s story tells the whole tale, Dudgeon can get to just about everything.

On two separate attacks, Wheelersburg (17-1) sent two or three shots at Dudgeon after ricochets and on both, Dudgeon wagged her finger.

“I just like going out for my girls. They’re such good teammates,” Dudgeon said. “I came in [her freshman year] not playing goalie and [Westfall coach Devin] Schoonover told me he needed a goalie. So I said, ‘OK.’ I had never done it before.”

Turns out, Schoonover knew a thing or two; and that could be said in a broader sense.

In each of the past three seasons, under Schoonover, the Mustangs have made significant improvements. One reason is coaching and another reason is player development.

That group, alongside the rest of their teammates, brought home the program’s first sectional title last week with a 2-1 upset win at No. 3 seeded Peebles.

“I think the bonds we have on our team is definitely a key factor,” Farmer said. “It definitely adds that trust in there and allows us to communicate with each other. It’s really neat to be at this level. I’m impressed and we definitely put up a fight.”

Wheelersburg didn’t get on the board until the 26:42 mark in the second half.

“We watched some of Wheelersburg’s games and we knew they had speed,” Dudgeon said. “They like to fast break a lot. [On the goal], our defenders were a little out of position and there were a lot of girls in one spot. It was a fast break and a little hard to judge where [Wheelersburg] was going with the ball. It was at the right place at right time and they got it to the right player.”

That group has certainly laid the groundwork for their program’s future.

“Our seniors uplifted everyone,” Farmer said. “They definitely brought smiles to everyone’s faces and they made practices and playing on this team fun. That’s a big thing. They boosted everyone up a notch. They were great leaders.”