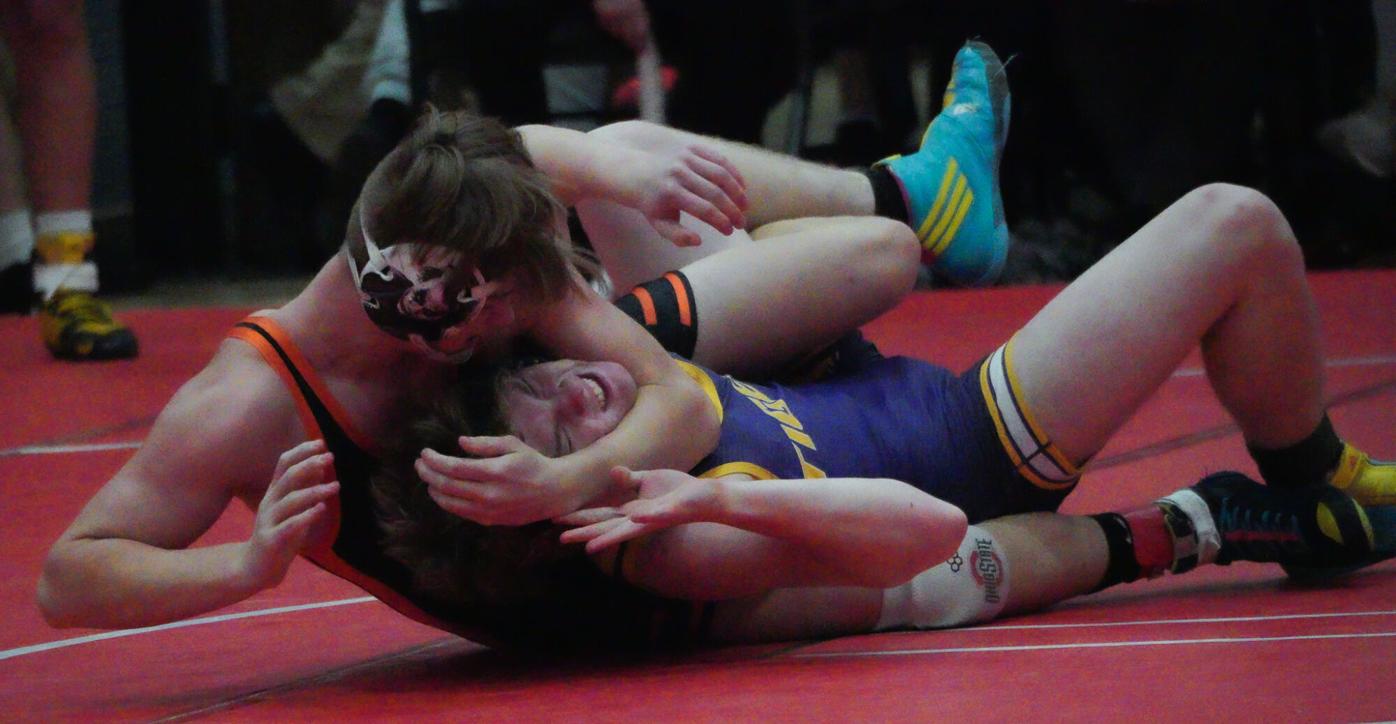 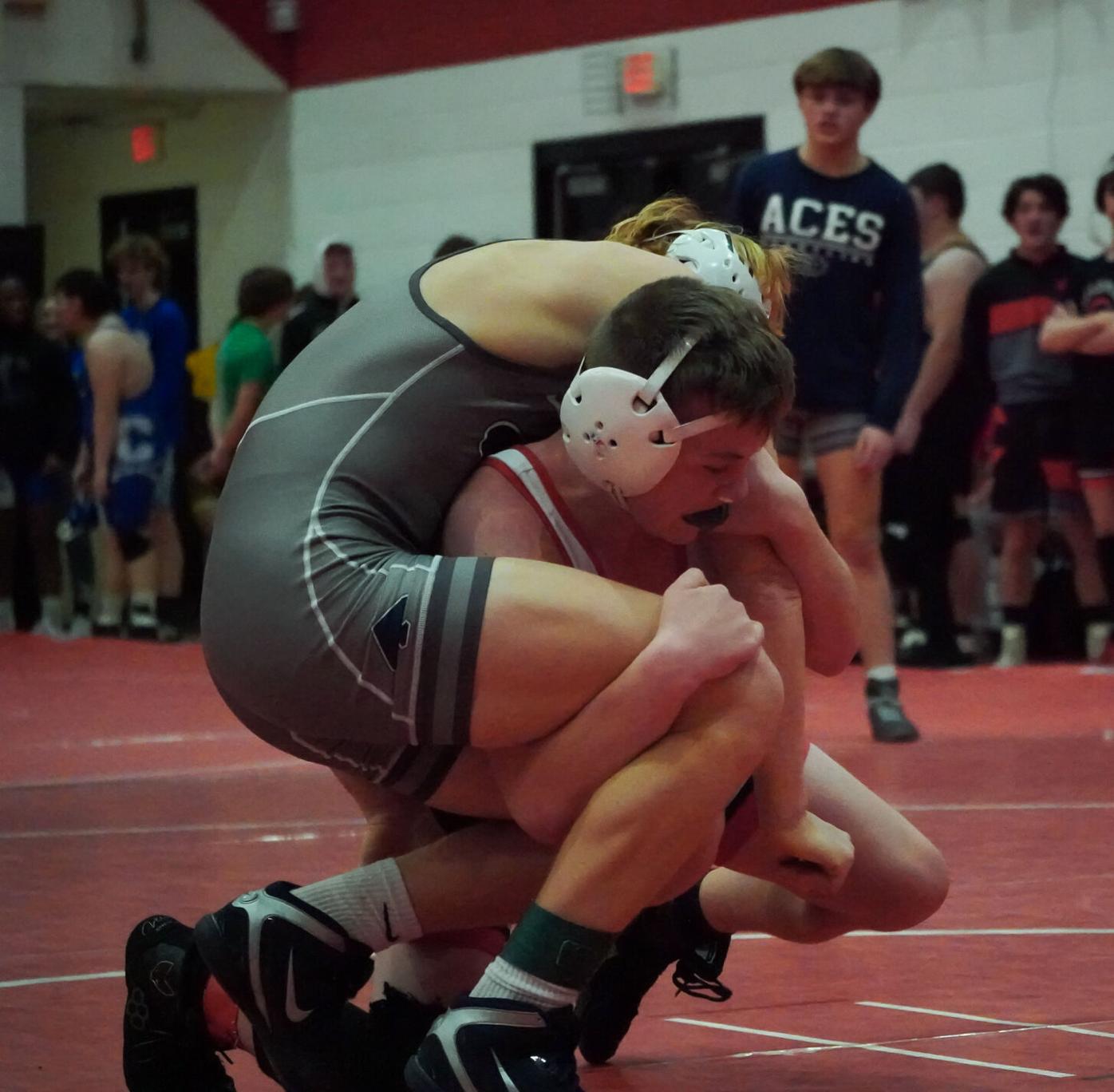 CIRCLEVILLE— The midpoint of a season can be a tricky time for athletes. On the one hand, they have a number of games or events under their belts that add to their experience. On the other hand, it can also be the point when fatigue and lingering injures set in.

On Saturday, Logan Elm High School hosted a wrestling invitational and the final six weeks before sectional tournaments began. Now is the point in a season where athletes buckle down and prepare for the fast stretch into the postseason.

The Braves hosted the Circleville Tigers, Amanda-Clearcreek Aces and a few Westfall Mustangs, along with 13 other teams in a pool style tournament.

The host team had a strong showing from several freshmen wrestlers on Saturday.

In the 106 weight-class, freshman Dawsen Hudson finished fourth after being pinned by A-C freshman Reese Marshall in the third place match.

Gavin Hoover, who won his 120 weight-class during the Braves’ last outing, had a slightly disappointing finish on home turf. Hoover finished second after a 2-1 decision went in favor of Miami Trace sophomore Corbin Melvin. In his five person pool, Hoover went undefeated before facing Melvin.

The third freshman to place for Logan Elm was Hunter Schoenborn who competed in a 4-by-4 pool in the 138 weight-class. Schoenborn went 2-1 in pool competition before finally finishing in fifth place.

The Aces had a top six finisher in six weight-classes, including two first place finishers.

In the 106 weight-class Aces’ freshman Reese Marshall came in third place after pinning Braves’ Hudson in their final match.

One weight-class up, competing at 113, sophomore Jacob Durr finished in fifth place after defeating Westfall senior Christian Furniss in the fifth place match.

The main event for the A-C wrestling team was in the 138 weight-class where senior Luke Herron competes. Herron came into the event undefeated for the season, and he left the same way. All three of his pool matches ended with a pin in under two minutes.

The one stumbling point Herron faces all day was during the first place match against Dublin Jerome sophomore Ian Cho. After winning four matches by pin, Herron fought hard to win in a major decision over Cho and keep his unblemished record.

Fellow Aces senior Bobby Pieratt finished second in the 144 weight-class after being unable to finish his final match against Miami Trace senior Weston Melvin, resulting in a win by default for Melvin.

The other first place finisher for Amanda-Clearcreek was senior Grant Guiler in the 150 weight-class. In the final match, Guiler won in a 6-5 decision over Clinton-Massie senior Braden Rolf.

Rounding out the top finishers for the Aces was freshman Peyton Beavers. In the 157 weight-class Beavers was defeated by major decision in the third place match against Granville senior Ethan Guglielmi. He finished in fourth place.

The Tigers had a strong team showing on Saturday. Four wrestlers finished in the top six of their weight-class, with one finishing atop the podium.

Freshman Carson VanGundy finished sixth in the 106 weight-class after having a tough tough pool assignment.

In the 113 weight-class, sophomore Landen Zarbaugh finished in fourth place. Zarbaugh went 1-1 in the pool before going 0-2 in the bracket rounds.

Sophomore Gage Bolt placed third in the 144 weight-class. Bolt was 3-0 in the pool before losing to the eventual weight-class winner in the first of the bracket rounds. During the third place match, Bolt won a 4-0 decision over Celina sophomore Zach Greber.

The sole first place finisher for the Tigers was junior TJ Fulgham in the 285 weight-class. Fulgham has been on a hot streak this season and did not disappoint with his perfect record at the event on Saturday.

The Mustangs only had four wrestlers entered into the tournament so were not looking for a big team win.

Individually, two Mustangs finished in sixth place, senior Christian Furniss in the 113 weight-class and junior Samuel Arledge in the 285 weight-class.