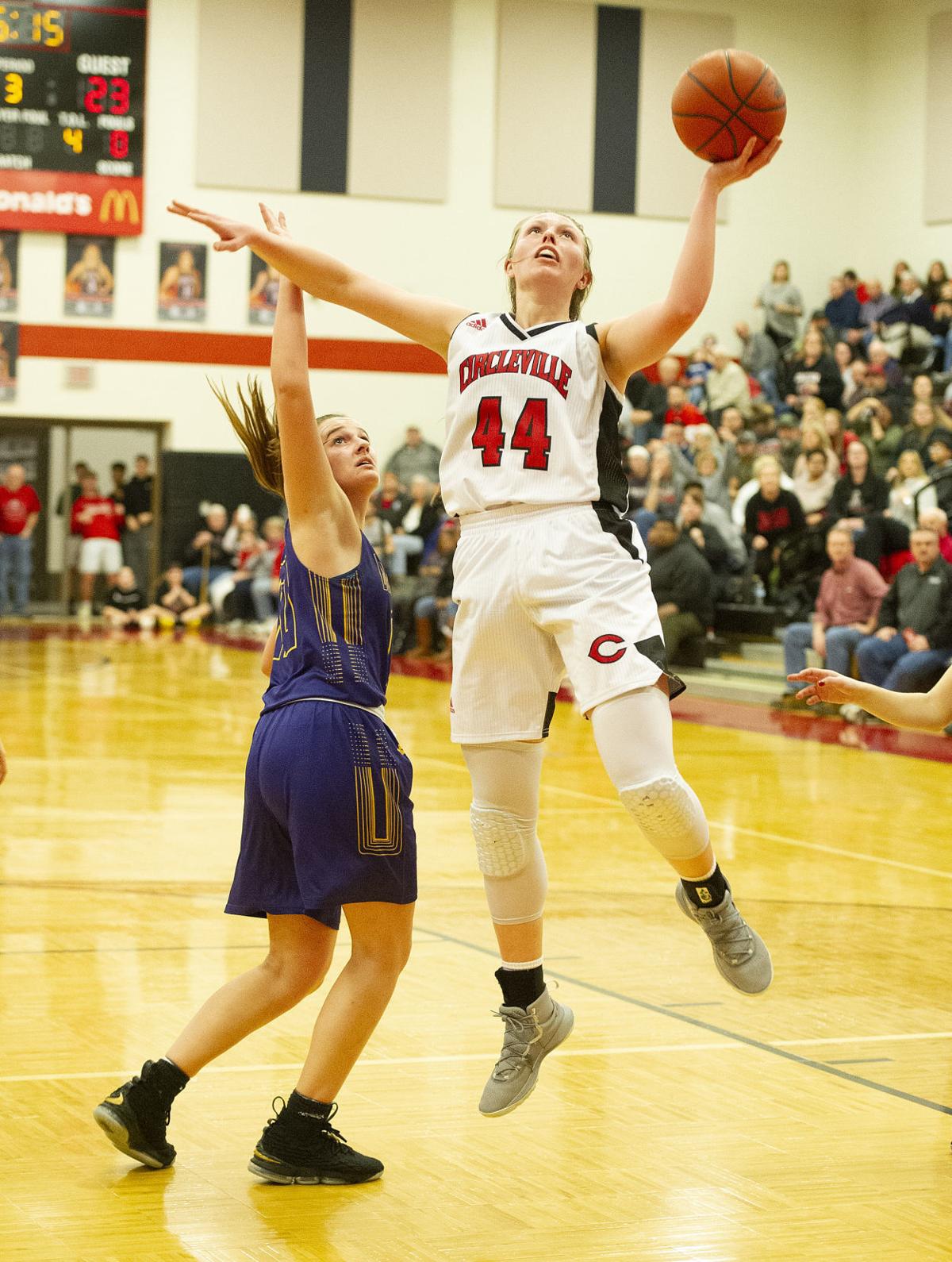 Kenzie McConnell makes a move around Bloom-Carroll’s Carley Bryant to surpass 1,000 points in her career, becoming only the sixth girls basketball player to do so for Circleville. 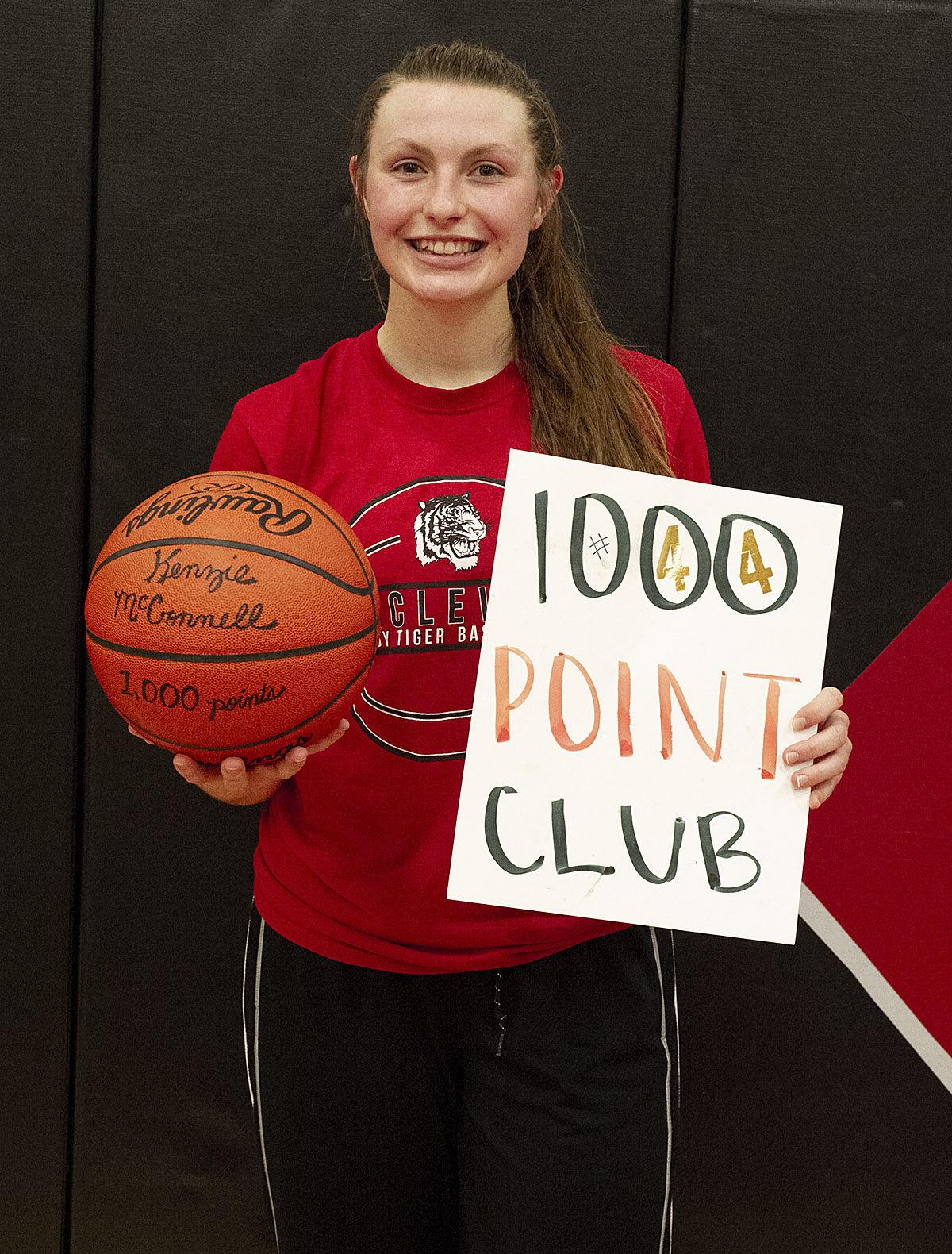 Kenzie McConnell poses for a photo with the ball she used to become a member of the 1,000-point club.

Kenzie McConnell makes a move around Bloom-Carroll’s Carley Bryant to surpass 1,000 points in her career, becoming only the sixth girls basketball player to do so for Circleville.

Kenzie McConnell poses for a photo with the ball she used to become a member of the 1,000-point club.

Bloom-Carroll came in riding a seven-game winning streak but Circleville had a couple big goals in front of them.

First, the Tigers wanted to stay undefeated for the season and, second, they wanted to see junior Kenzie McConnell write her name in the record books.

Mission accomplished as McConnell passed 1,000 points in the third quarter of a 49-34 win over the Bulldogs.

“I was really nervous coming in because 14 sounds like a big number when it’s like such a big thing,” McConnell said of scoring her 1,000th point off an assist from Brie Kendrick. “It was so cool and my teammates helped me get to where I am and I couldn’t have done it without them. It was just such a relief to be able to not have to worry about it and just focus on the game.”

“Those don’t come around too often. I don’t know if I’ve coached a player who’s worked any harder than her. She does all the extra stuff,” Circleville coach Steve Kalinoski said. “I’ve been fortunate to coach her first three years.

With three regular season games left for the Tigers (19-0, 11-0) plus the postseason, she has a good shot at passing her parents, both Circleville grads, this year.

“It’s just so cool to be able to join my parents in the club,” she said. “As a junior, it’s really special and I have a long way to go, but it’s just a cool accomplishment.”

McConnell reached the milestone having played in all 68 of Circleville’s game over the past three years and not shying away from extra work.

“I’ve spent multiple holidays, like Christmas and New Year’s Eve, here in the gym. Over the summer, we have really good summer programs and that really helps,” she said. “Coming in my freshman year, I knew I had to be strong and I’ve really stuck with the weight lifting and that’s helped a lot.”

Friday’s game started a little slow for the Tigers with only three points to show for the first five minutes, but they got back in their flow late in the first quarter to lead 13-12.

Jaylah Captain hit two three-pointers and Meghan Davis had a bucket in the first two minutes of the second quarter to give CHS a 21-14 lead and the Tigers went in up 32-19 at halftime.

“We started off really slow. We were very aware of Kenzie and there was a big student section so we were very nervous and we just had to keep our composure,” said Captain, who finished with a game-high 20 points. “Knocking down a couple of those shots, I got a little bit of confidence and we got some confidence in the team and got to pushing the ball and raise the lead a little bit.”

Bloom-Carroll (10-8, 6-5) scored the first two baskets of the second half, but the next two came from McConnell.

“I’ve played with Kenzie since the fourth grade,” said Captain, who is in her first season at Circleville but has played AAU basketball with McConnell. “It’s just amazing. She’s my best friend and I’m so happy for her. To see her get those 1,000 points, it’s such a great accomplishment for her.”

Captain’s 20 points led all scorers and McConnell finished with 17.

The Tigers dominated on the boards with a 33-18 rebounding edge led by seven from Captain, six from McConnell and five from Davis.

A loss by Fairfield Union Friday clinched at least a share of the Mid-State League Buckeye Division title for Circleville and the Tigers can clinch sole possession for themselves with a win at Liberty Union (10-6, 6-5) Tuesday. The Bulldogs take on Teays Valley Tuesday night.

Sara Gearhart led the Tigers with eight points, Lily Winter and Jordan Rhymer each had six, Logan Jones and Alaina Francis each had four while Camille Hoop added two.

Sorry, there are no recent results for popular images.