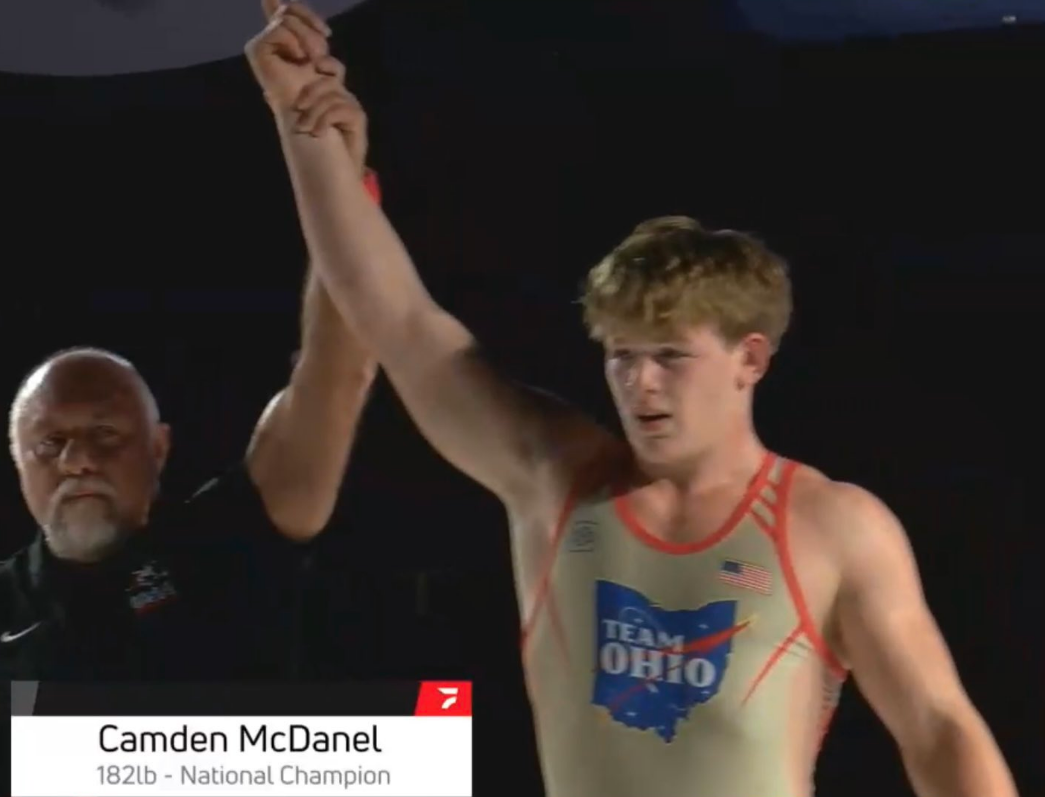 Camden McDanel was crowned as the 182-pound national champion. 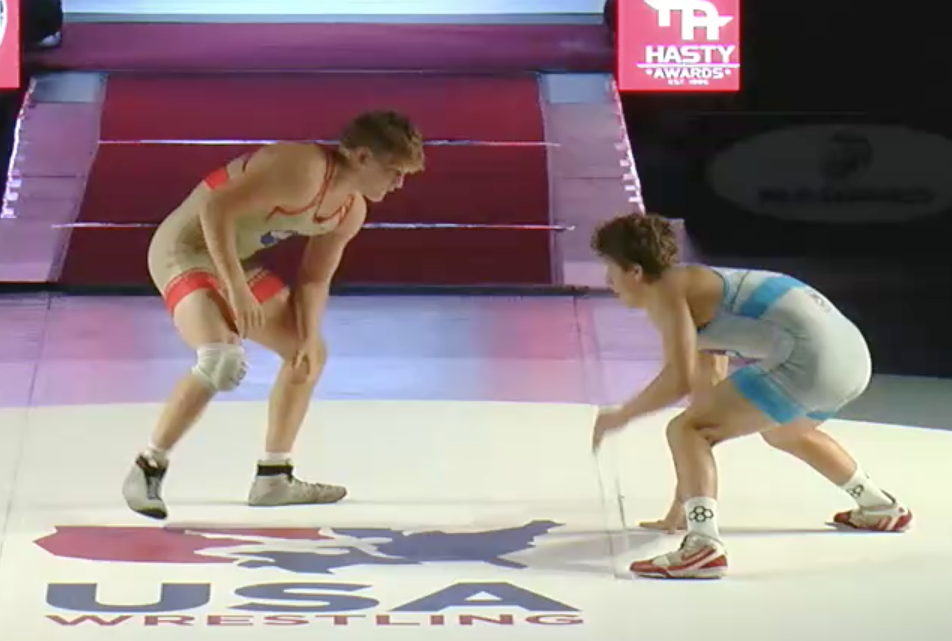 Teays Valley’s Camden McDanel (left) and Luke Vanadia (right) compete in the finals for the 2021 US Marine Corp. Junior and 16u National Championship.

Camden McDanel was crowned as the 182-pound national champion.

Teays Valley’s Camden McDanel (left) and Luke Vanadia (right) compete in the finals for the 2021 US Marine Corp. Junior and 16u National Championship.

FARGO, N.D. — Two local wrestlers ventured out west this past weekend to compete in the 2021 US Marine Corps Jr. and 16u National Championships held at the Fargo Dome in Fargo, N.D. Teays Valley’s own Camden McDanel shuttered the competition Monday when he became the 182-pound 16u Freestyle Champion.

Prior to boarding for Fargo, McDanel and fellow Viking Zander Graham spent weeks preparing and training for the freestyle wrestling tournament. Freestyle is just one of several martial arts wrestling disciplines which, along with Greco-Roman, is just one of two styles contested at the Olympic Games.

During the regular season at Teays Valley High School, both wrestlers compete in what is known as scholastic wrestling as both high schools and colleges nationally conduct their mat rules similarly.

Starting last Friday, both wrestlers entered separate tournament brackets with Graham competing in the junior freestyle 145-pound bracket and McDanel in the 16u freestyle 182-pound bracket.

After taking a first round bye, Graham went up against Iowa’s Caleb Rathjen who placed second in the Iowa High School Athletic Association’s State Tournament in February, according to Track Wrestling.

In his first bout, both grapplers scrambled once the initial whistle blew with Rathjen getting the upper hand, scoring eight unanswered points. Graham attempted to bolster his defensive posture, however, a late takedown gave the Iowa wrestler another two points as Rathjen claimed victory against the Viking 10-0 — a superiority win or technical fall.

Coming off a loss, Graham then faced-off against Montana’s Brady Ellison in the 145-pound consolation match of 64. Ellison placed third in the state’s high school wrestling tournament earlier this year.

Taking notes from his last match, Graham put the pressure on Ellison early, taking down the opposing grappler early for two points. After securing another two points on the ground, Graham and Ellison met back at neutral before the Montana wrestler pressed the attack.

Staying reactionary, Graham waited for the right time to expose Ellison’s technique as he tried to take the Viking down, but was unsuccessful, giving Graham an additional four points — up 8-0 against Ellison.

Scrambling on the ground, Graham’s right side was left open, giving Ellison the opportunity to put two points in his column. After meeting back at neutral, a shot attempt by Ellison became an unwise choice as Graham hoisted his opponent over, putting him on his back. Graham walked away the victor in his second match, pinning Ellison in the first period after scoring 10 points.

For his third match in the consolation round, Graham went up against another Montana wrestlers, Fin Nadeau, who placed second in the 152-pound weight class of Montana’s state tournament. Graham wasted no time taking down Nadeau, securing five points in the process.

However, Nadeau quickly came back against the Viking, scoring 10 points in the first period. The Montana grappler claimed the win against Graham after scoring a technical fall with the final score 16-5, ending the Teays Valley student’s Fargo tournament bout.

For McDanel, his journey through the Fargo Dome went all the way as Ohio’s 2021 182-pound runner-up claimed his first win against Florida’s Rhyley Smith 12-0 by technical fall.

In his second match in the 182-pound 16u freestyle bracket, McDanel faced off against Massachusetts’ Jude Correa — first place winner in the 2021 USA Wrestling Folkstyle National Tournament.

Correa was the first grappler to draw two points taking down McDanel halfway through the first period. McDanel got the upper hand as he earned a four-point takedown with under 50 seconds left in the first period.

After a brief break in the action, the Viking was on the attack, taking down Correa again with a two-point takedown. At the end of their match, both wrestlers were tied at nine points apiece, but it was McDanel who claimed to be the dominate the wrestler, allowing him to progress into the round of 16.

McDanel went up against Pennsylvania’s Danny Church in the round of 16 and secured another tech-fall win after scoring 10 points to Church’s zero.

In the quarterfinals on July 18, McDanel took on Nebraska’s Noah Blair — a state placer — and won again, this time by tech fall with the semifinals coming later that evening.

McDanel then competed against 170-pound Wisconsin state champion and nationally ranked wrestler Connor Mirasola in the semifinals, winning by a small margin with the final score 6-2.

This past Monday was the culmination of everything McDanel and his teammate were training for as the Teays Valley standout prepared for his finals match against fellow Ohioan Luke Vanadia — seventh placer in the OHSAA Division I State Tournament for 170-pound weight class.

Vanadia was the first grappler to score a four-point takedown in the first period, putting himself ahead of the Viking early. McDanel tallied a two-point takedown himself as he forced Vanadia out of bounds, returning to the middle in neutral positioning — Vanadia up 4-2.

McDanel took a shot at Vanadia’s left side, but a sprawl would quell his takedown attempt with Vanadia getting a two-point takedown. Meeting back at neutral, McDanel was able to secure another two-point takedown as the Viking slowly chopped away at his opponent’s lead.

McDanel was awarded another point after forcing Vanadia out of bounds, putting the contest at 9-6. With time winding down, Vanadia embraced McDanel whose grappling earned him the crown at 182-pounds for the 16u Freestyle Bracket.

“I just wanted to thank everyone that helped me fundraise and make enough money so I could get to the tournament... couldn’t have done it without them,” McDanel told The Circleville Herald. “One Fargo championship down in the in the books, many more tournaments to conquer the rest of my career.”