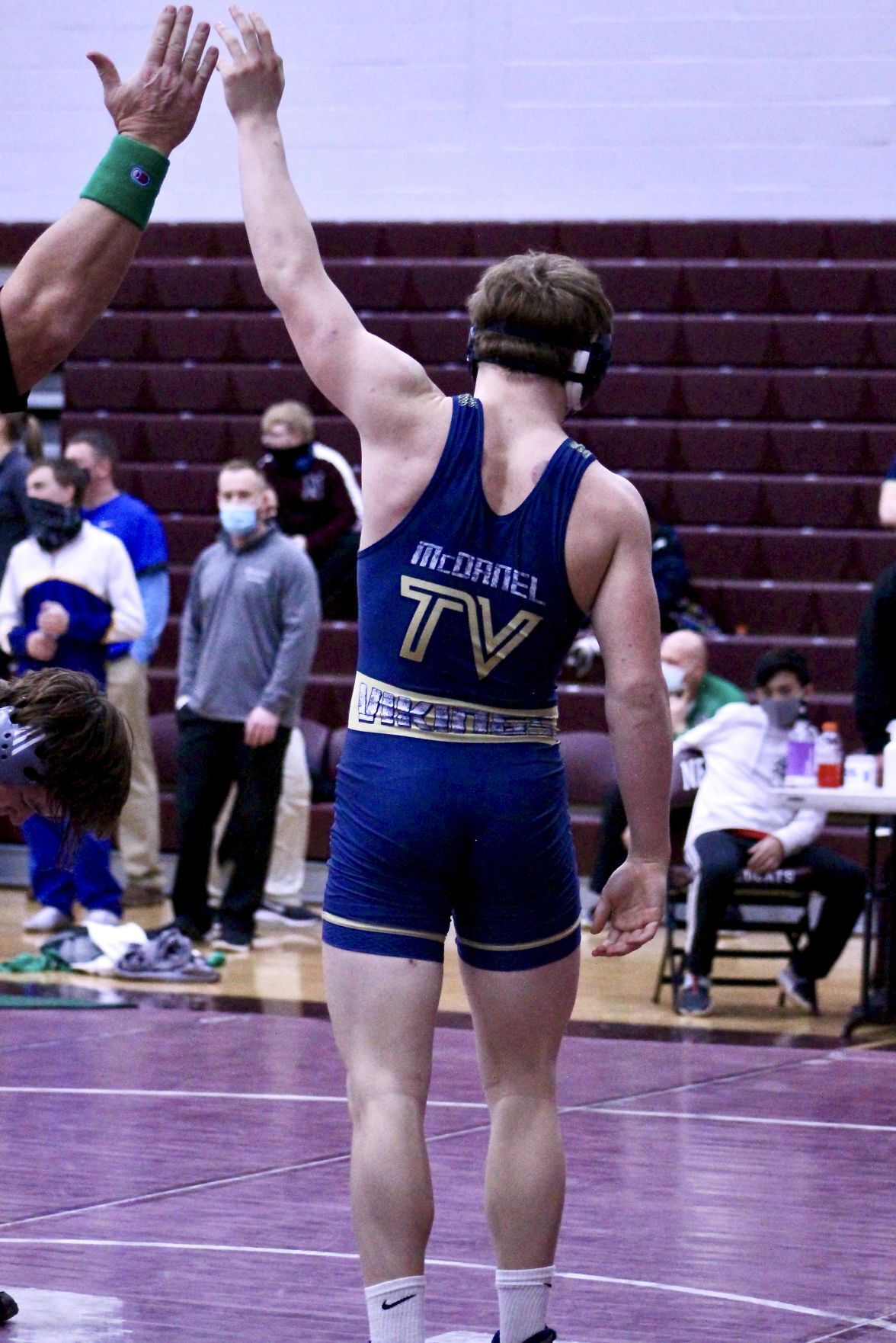 Vikings 182 pounder Camden McDaniel raises his hand after defeating his opponent by pin. 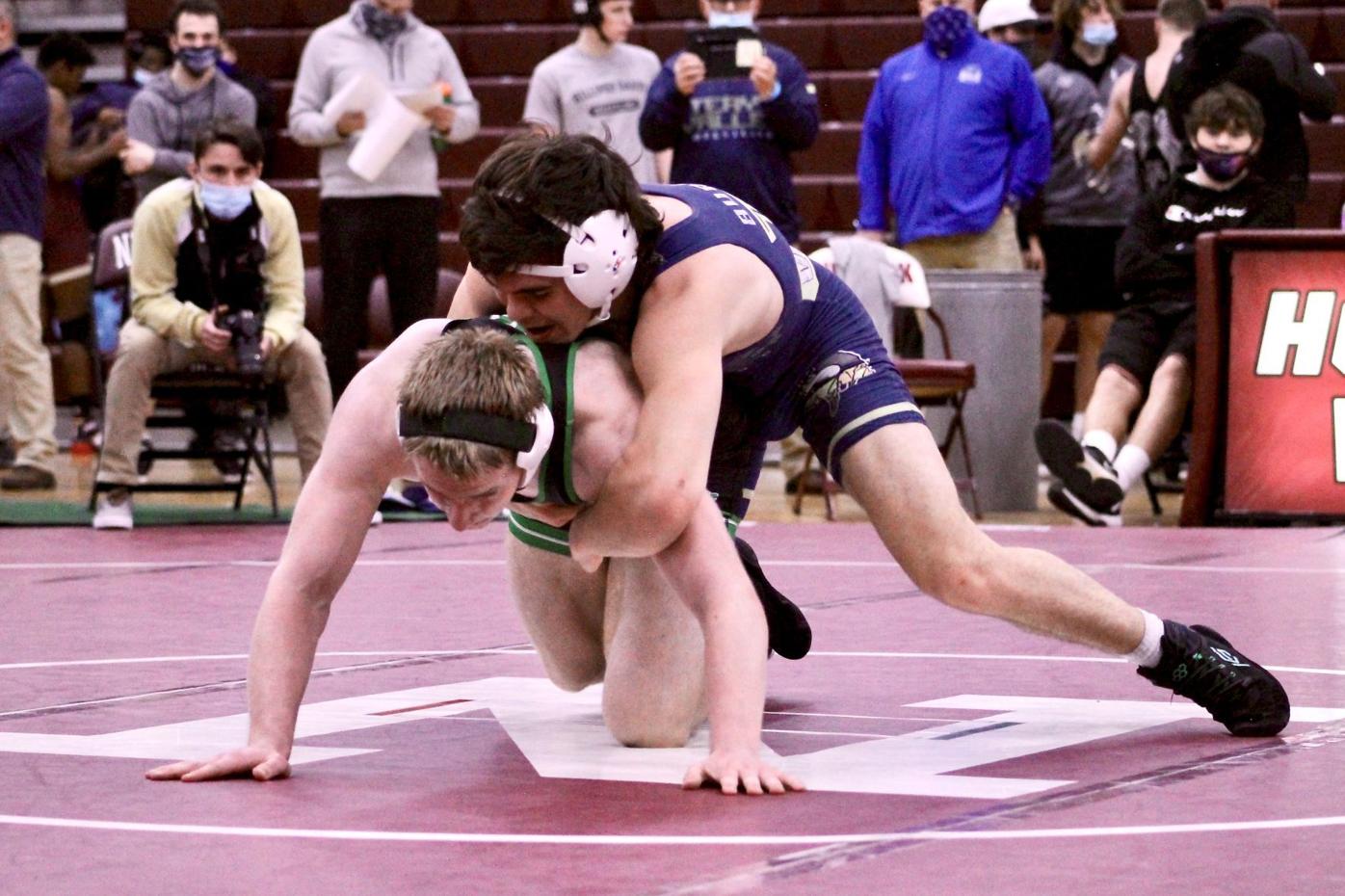 Vikings’ 152 pounder Ethan Burch attempts to break down his opponent.

Vikings 182 pounder Camden McDaniel raises his hand after defeating his opponent by pin.

Vikings’ 152 pounder Ethan Burch attempts to break down his opponent.

Due to public health safety concerns, the tournament held at Newark High School was split into two groups. Splitting all weight classes into two groups, the lighter weights would compete in the early morning on Saturday with the heavier classes starting around 4 p.m.

IN the 106-pound weight class, Teays Valley’s Gunner Havens would pin his way to the top after taking a first-round bye. The number one seed in the class would go on to pin all three of his opponents within the first period taking home first place.

At 120 pounds, Vikings’ Kadin Walls would finish in the top four after falling in the semifinal round of his class. After winning against Berlin’s Daniel Barreca by an 11-2 decision, Walls would lose his next match against Dublin Scioto’s Dylan Le. Walls would get pinned in the first period but would wrestle back for third place but was pinned again by the 2:33 mark of the match. While losing his last match, he did finish in the top four — enough for districts.

At 132 pounds, freshman Owen Robinett finished in the top four as well. After winning his first match, Robinette would receive a technical fall by the hands of Dublin Coffman’s Ethan Birden. The freshman would wrestle back for third place only to get pinned in the first period. However, the freshman made the cut for districts ending the day at fourth place.

Not to long after, at 138 pounds, Teays Valley’s Zander Graham had his sights on the prize, pinning his way to first place. After a first-round bye, Graham went on to pin his first two opponents within the first period. In his finals appearance, Graham would get another pin this time at the 3:29 mark of the match.

Graham is now a three-time district qualifier and also surpassed 100 wins in his career.

At 145 pounds, Vikings’ Carrson Weiss would also end the day in the top four after losing in the semifinals. Carrson would compete for third place but would finish in fourth after losing by a 8-2 decision.

At the 182-pound weight class, Camden McDaniel took home first place for the Vikings. McDaniel would go on to pin his way to the finals where he faced Mitchell Broskie of Dublin Coffman. The final match would go all three periods making McDaniel the winner by a 4-3 decision.

At 195 pounds and in his first year in the line-up, junior Jacob Robinette finished third in his class. After losing to the second seed by pin, Robinette would find himself wrestling for third place — winning by a technical fall.

At 220 pounds, number one seed Liam Wilson would take home first place after beating three opponents along the way. After pinning his first challenger, Wilson would win the rest of his matches by major decision — the closest margin being his finals match against Michael Blocher of Dublin Coffman with the ending score 4-1. This is his fourth time qualifying for districts.

Lastly, at the 285-pound weight class, Joey Thurston would end the day in third place. After losing to by another Dublin Coffman wrestler, Riley Ucker, by major decision, the super heavy weight would wrestle back for third place pinning his last opponent to qualify.

“The Vikings had a great day,” Head Coach Todd Nace told The Circleville Herald. “I am really proud of the kids… we wrestled hard and the team came together.”

The Teays Valley Vikings ended the day in second place as a team just behind Dublin Coffman. In total, the Vikings boast nine wrestlers moving on to the district tournament.

The district tournament will be held this weekend at Hilliard Darby High School.