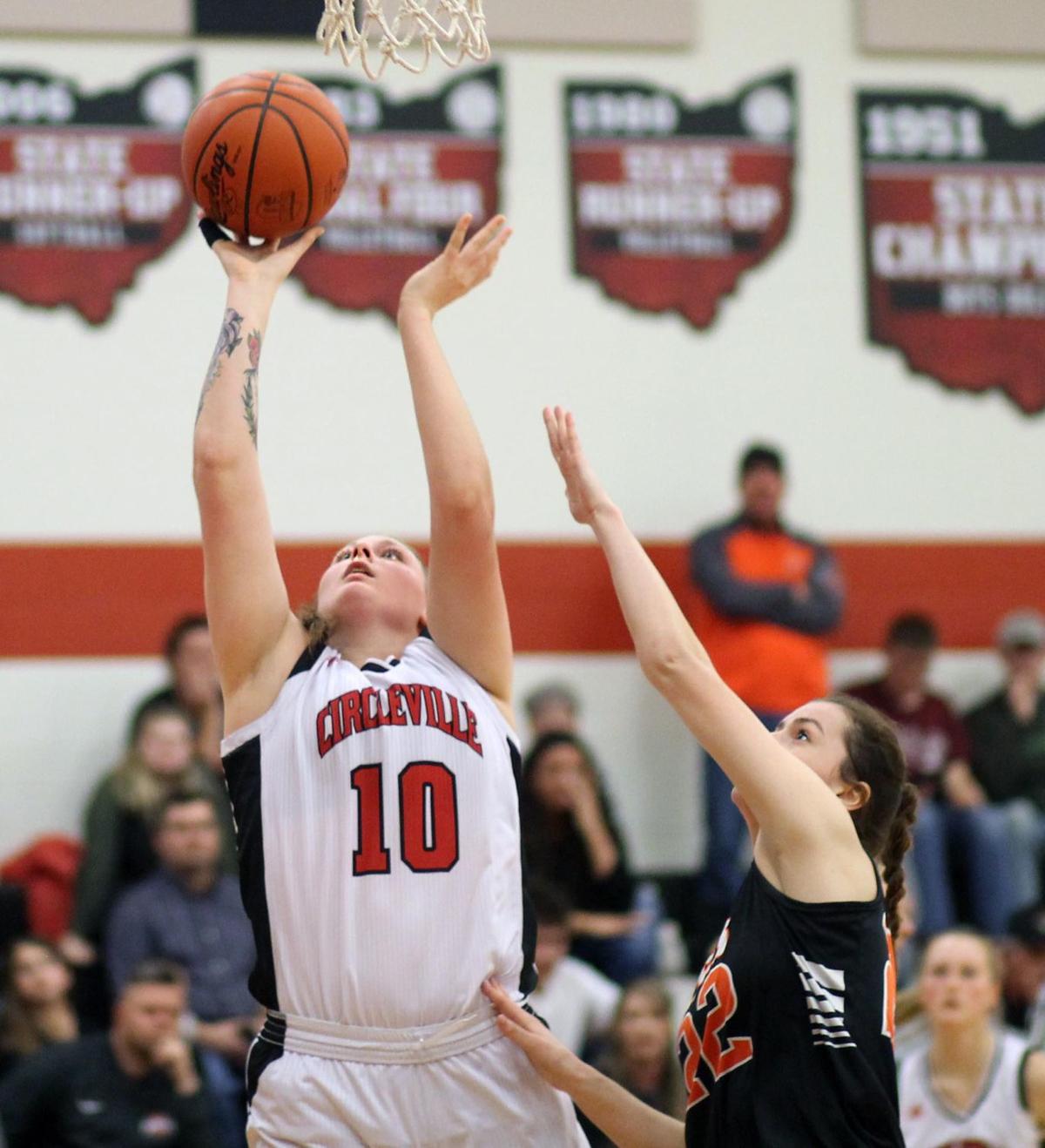 Circleville senior Meghan Davis scores two of her 14 points on Friday in a 45-24 win over Amanda-Clearcreek. 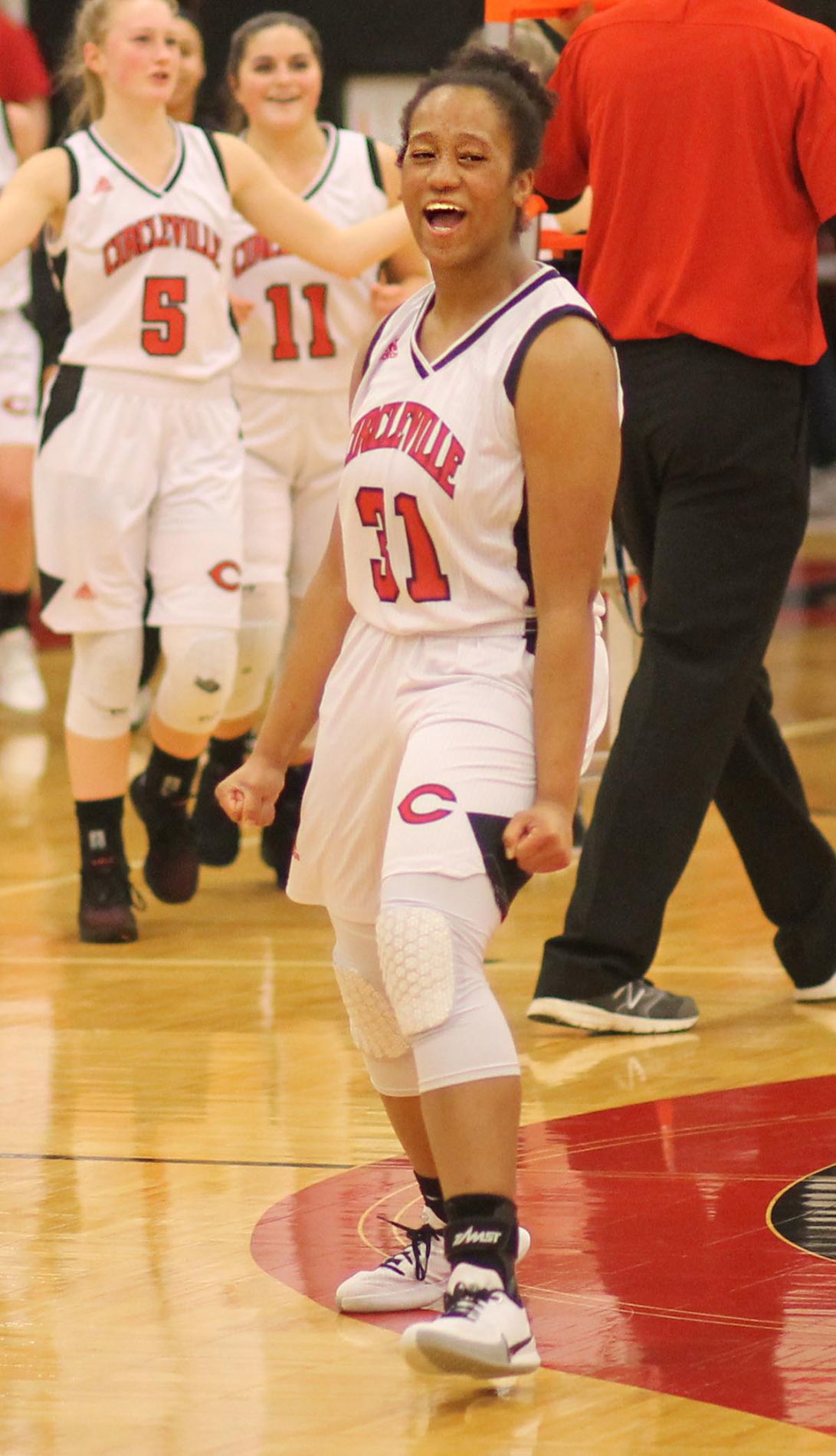 Circleville senior Brie Kendrick shows her emotion after a 45-24 win over Amanda-Clearcreek on Friday to cap a perfect regular-season. 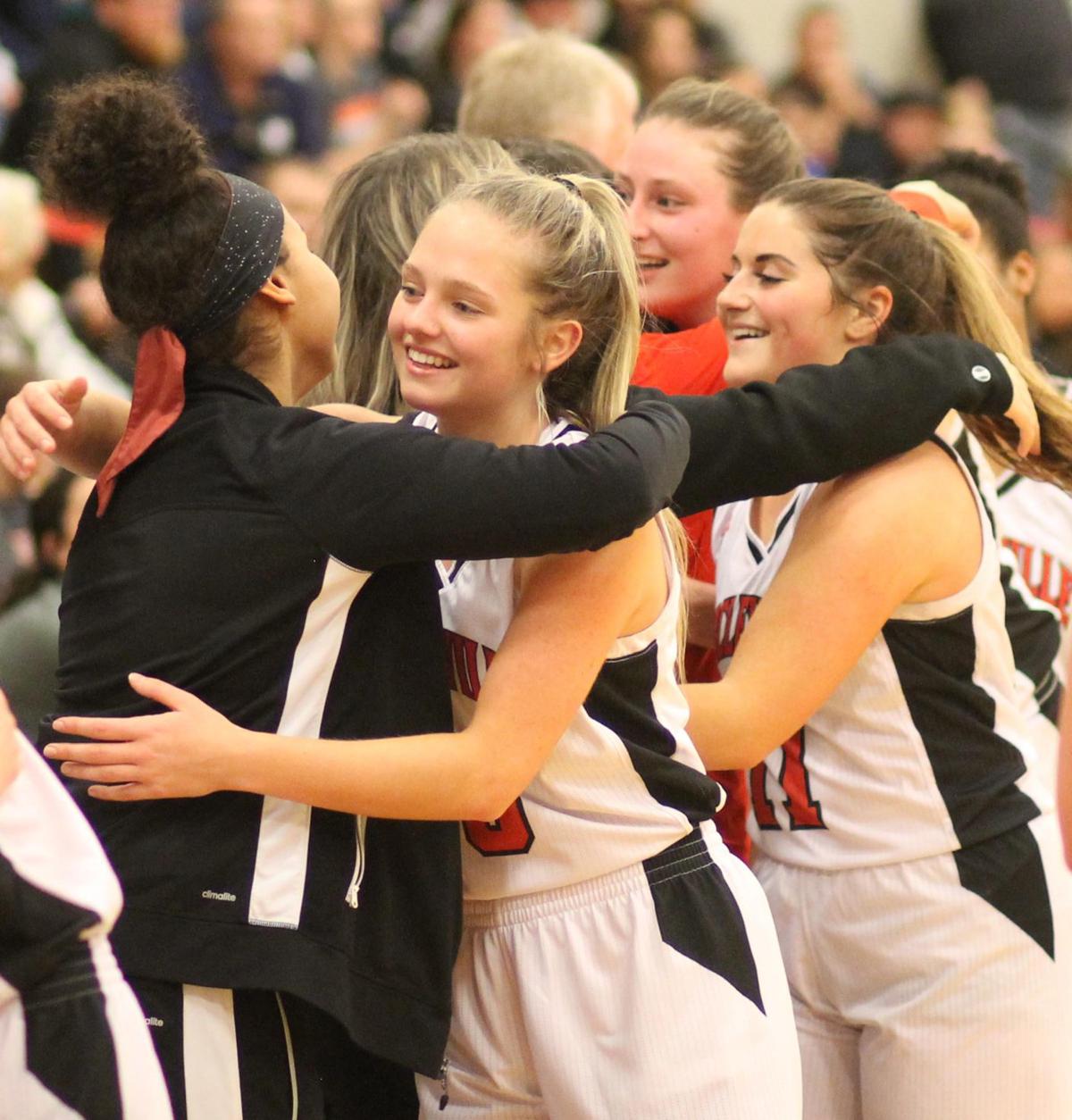 Circleville seniors Peyton Perini, Sidney Gray and Meghan Davis receive hugs from teammates after leaving the court for the final time at home on Friday in the closing minute of a 45-24 win over Amanda-Clearcreek. 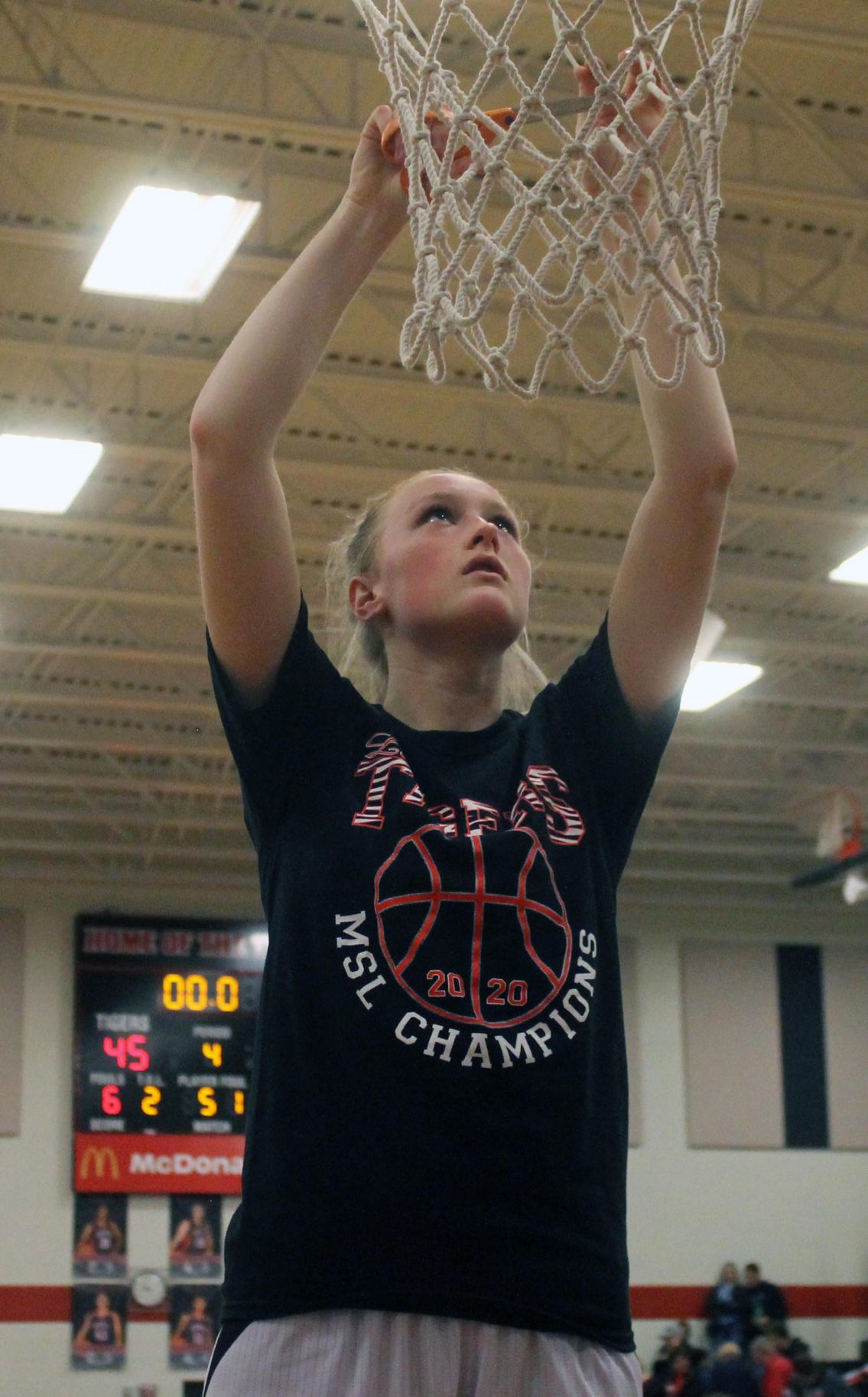 Circleville senior Meghan Davis scores two of her 14 points on Friday in a 45-24 win over Amanda-Clearcreek.

Circleville senior Brie Kendrick shows her emotion after a 45-24 win over Amanda-Clearcreek on Friday to cap a perfect regular-season.

Circleville seniors Peyton Perini, Sidney Gray and Meghan Davis receive hugs from teammates after leaving the court for the final time at home on Friday in the closing minute of a 45-24 win over Amanda-Clearcreek.

After walking off the basketball court for the final time inside Circleville High School with her fellow seniors, cutting down part of a Mid-State League Buckeye Division championship net and posing for photos with teammates, family and friends, Brie Kendrick tried to put into words on Friday what a perfect regular-season meant to her.

“It’s been an unbelievable regular-season. We’ve had so many incredible moments together and so much fun,” she said. “It’s really hard to put into words how I feel right now.”

It’s hard to know where to start in describing what is a rare feat in high school basketball — a perfect regular-season.

The Tigers completed perfection with a 45-24 win over visiting Amanda-Clearcreek much in the same dominating style they won almost all of their games during the regular-season.

It was the 10th time the Tigers held an opponent below 30 points in a game and the 20th time they won by double-digits. The Tigers finished the regular-season with an average margin of victory of 25.1 points and were only pushed twice in a pair of nine-point wins — 50-41 over Tri-Valley on Dec. 27 and 57-48 against Fairfield Union on Jan. 14.

All of that success has led the Tigers to being ranked the top team in Division II Ohio girls basketball by the Associated Press.

“We have really good chemistry together, we communicate well on the court and that’s what led us to being a strong defensive team,” Kendrick said. “There were a few games where we were a little off offensively, but we were always able to turn to our defense to win.”

Circleville coach Steve Kalinoski traces the origins of the unblemished regular-season back to the last time the Tigers suffered defeat — a 51-38 setback to state semifinalist Sheridan last February in a district final.

“We had a good season last year going 20-5, but we finished second in the league and in the district and our girls wanted more this season,” he said. “They really got after it in the offseason, working on their game, working in the weight room and they’ve carried that work ethic throughout the season.

“It’s nice when I walk into the gym for practice that I don’t have to worry about anything. I know our girls are going to be working hard and this is a great group of girls to coach.”

All five seniors — Kendrick, Meghan Davis, Tori Bircher, Peyton Perini and Sidney Gray — started the game, scored and walked off the court together in the closing minute to cheers from one of the largest crowds to see a girls basketball game in the high school gymnasium.

Davis led the way with 14 points, seven rebounds and four assists and Kenzie McConnell also accounted for 14 points to go with five rebounds and five assists.

“I haven’t had a strong offensive game for a little while, so it was nice to come out, get going early and have a good night,” Davis said. “I’ve been working on my post moves in practice. It’s nice to take this into the tournament.”

The Tigers opened the evening on a 9-0 run, but a pair of three-pointers by Gracie Hyme and a triple off the shooting hand of Kilynn Guiler helped the Aces battle back to tie the score at 11-11 heading into the second quarter.

Circleville turned to old reliable — its defense — to limit the Aces to 1 of 8 (12.5 percent) shooting in the second quarter with three turnovers.

Davis scored six points in the quarter and McConnell chipped in four to send the Tigers into halftime with a 21-13 advantage.

The Tigers shot 7 of 10 (70 percent) in the third quarter and opened the half by scoring on their first four possessions, highlighted by two baskets from McConnell and a triple courtesy of Bircher, to take a 30-16 lead.

“Amanda always has a good game plan and is very solid defensively,” Kalinoski said. “I felt like we were a little impatient during the first half with them trying to take away Kenzie and Meghan inside, but we settled in especially during that third quarter and did a nice job of executing our offense.”

Circleville led by as many as 16 points during the period and eventually extended its advantage to 21 points, following a basket by McConnell with 2:36 remaining.

The Tigers finished the evening 20 of 35 (57.1 percent) from the field and the Aces were 9 of 32 (28.1 percent). Circleville committed just four turnovers to seven for Amanda-Clearcreek.

Guiler paced the Aces with nine points and Katelynn Connell chipped in seven.

Both teams now prepare to change the page to the second chapter of the season — the tournament.

The Tigers (22-0, 14-0) travel to Adena on Thursday for a sectional final against either Athens or Meigs.

“We came into the season with high expectations and we crossed that first item off our list by winning the league championship,” Davis said. “We have a lot of confidence going into the tournament, but we also know it’s a new season and we want to dial it up another notch to finish strong when it counts.”