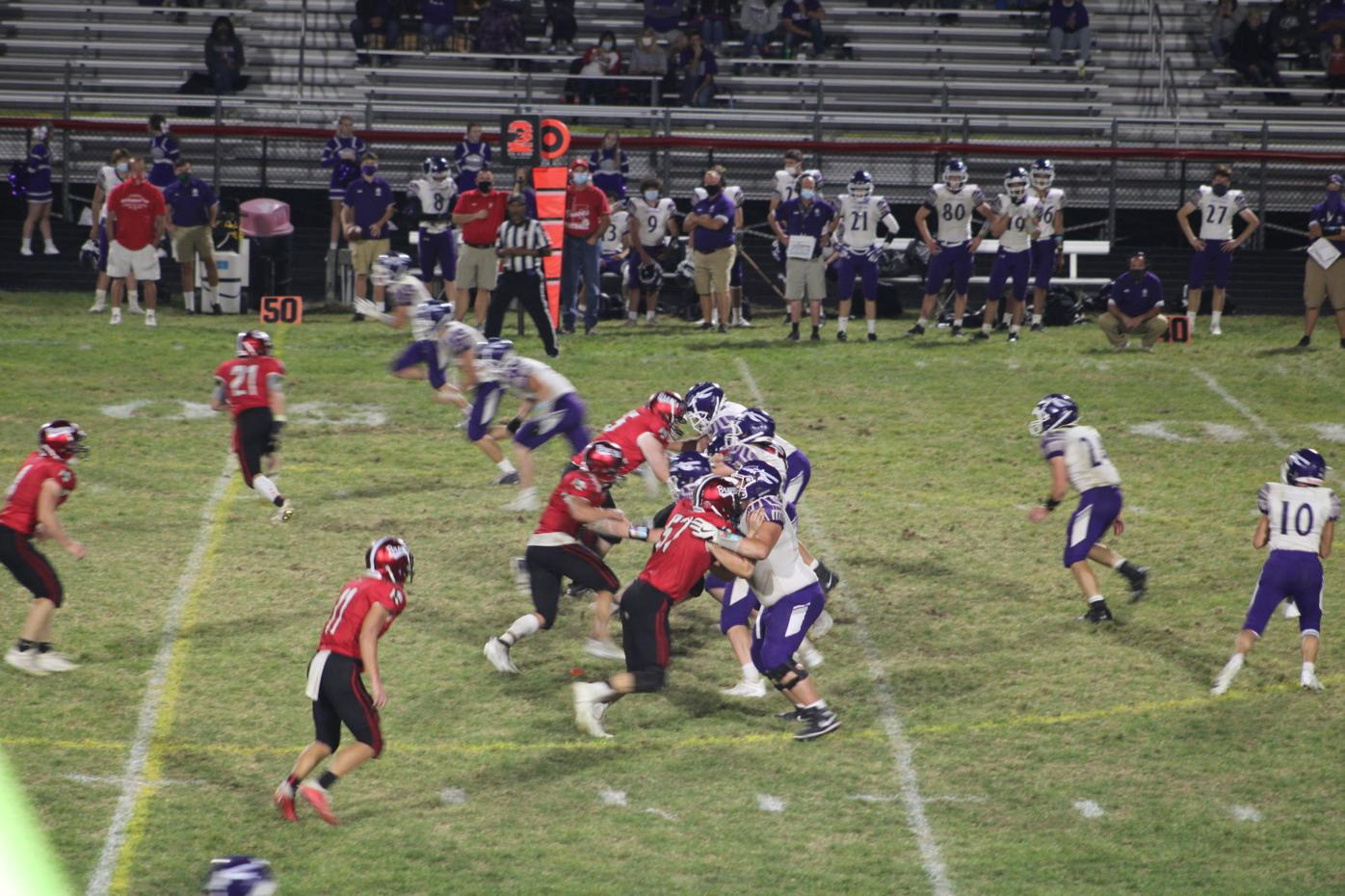 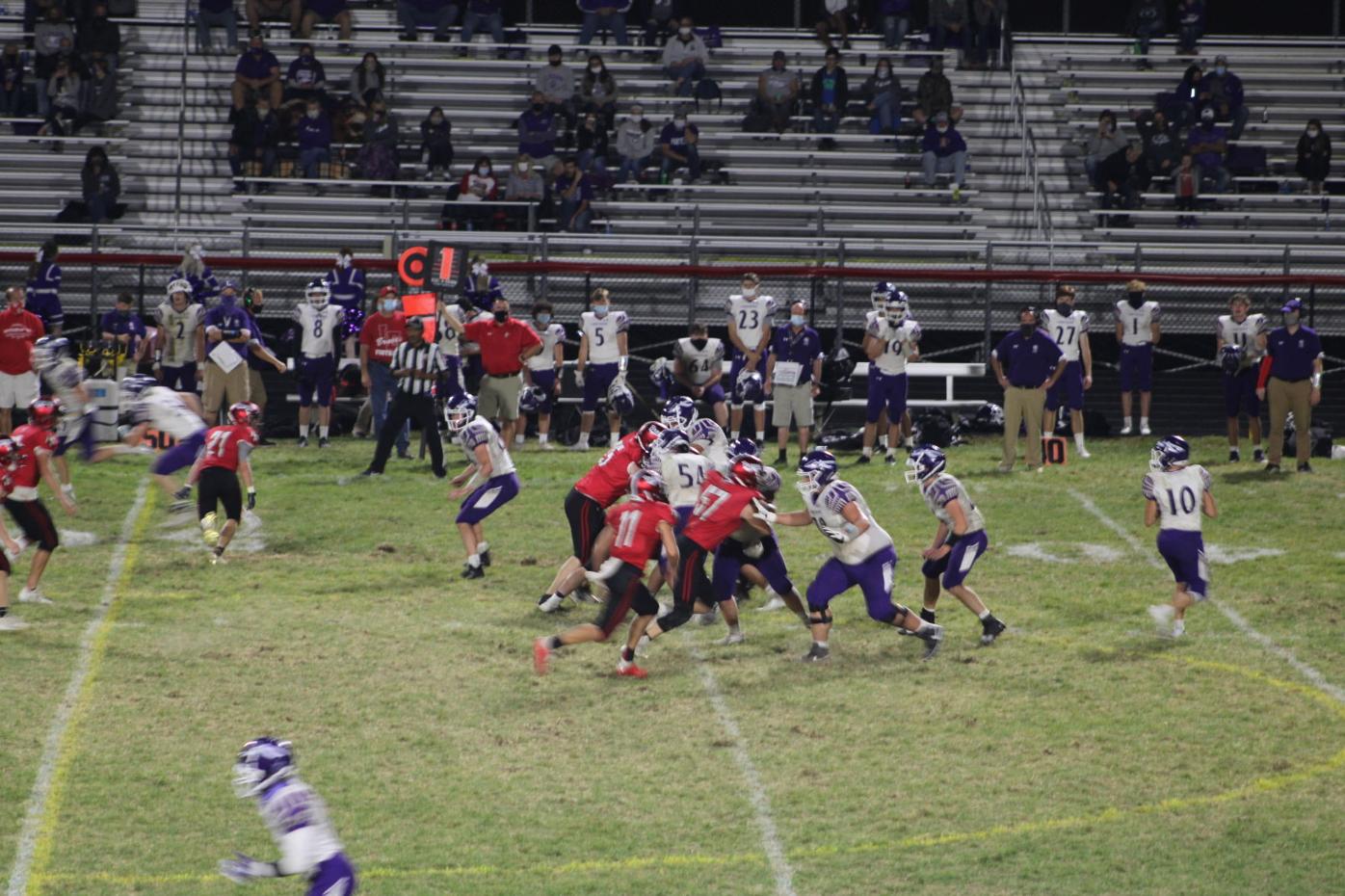 CIRCLEVILLE — The name of the Friday’s game was Logan Elm’s Conner Robinson, who led the Braves over the Logan Chieftains 48-21. Logan Elm moves to 3-2 on the year and the Chieftains fall to 0-5.

Robinson accumulated 423 total yards of offense (83 rushing, 324 passing) of the Braves’ 532 total offensive output. Robinson also totaled six touchdowns (one rushing, five passing) in the game. He out-gained the Logan offense by himself in the first half 262 to 121.

Logan Elm score two touchdowns in the first five minutes of the game when they took the opening kickoff and marched down the field 76 yards on just eight plays with Robinson accounting for 66 yards of those yards on the drive. Blayton Reid capped off the drive with a 10 yard run around left end for the score. After the extra point, the Braves led 7-0 with 9:50 left in the first quarter.

On the following kickoff, Logan’s receiver fumbled the ball and the Braves recovered to start their next drive. Again, Robinson took control of the drive by completing three of four passes, the last a 24-yard bomb to David Evans and after the Gabe Chalfin extra point, Logan Elm led 14-0 with 7:52 left in the first quarter.

Logan took following the kickoff at their own 39 yard line, but after two incomplete passes and a three yard run by Caden McCarty the Chieftains were forced to punt. Logan’s defense held the Braves to a three and out, but a bad snap gave the Chieftains the ball at mid-field.

After a Logan Elm timeout, Robinson hit Chalfin with a 43-yard pass giving the Braves a 21-0 lead with just 54 seconds left in the quarter. This was Robinson’s second touchdown pass of the quarter.

Logan started the next drive with a Traten Poling 12-yard run around right end for a Logan first down. Poling missed last weeks’ game with Bloom-Carroll with an ankle injury. As the second quarter started, Frasure ran three times for nine yards and completed a pass to Poling for another first down. But the drive stalled and Logan turned the ball over on downs at the LE34.

Just three plays later Robinson threw his third touchdown pass of the half with a 48 pitch and catch to Chalfin, to give the Braves a 28-0 after the extra point.

Logan turned the ball over on downs on their following drive. Braves took over on Logan’s 45 yard line and just six plays later Robinson hit Jason Sailor for a five yard touchdown pass. Robinson fourth of the half. Reid carried the ball twice for 15 yards and Mathew Dyer had one carry for 10 yards during the drive.

After a Jonny McClelland eight-yard kickoff return, the Chiefs started the drive on their own 39. McCarty toted the ball for 27 yards on the first play of the drive before Frasure hit McClelland with a 34 yard pass to put Logan at the Logan Elm one. Two plays later, McCarty crashed into the end zone for Logan’s first score. Logan trailed 35-7 after the Frasure’s extra point.

Logan Elm took just 3:26 to tack on their last score the first half. Robinson ran for seven, Reid carried the ball four time for a total of 27 yards. Again, Robinson hit Sailor for his fifth passing touchdown of the night and gave the Braves a commanding 41-7 halftime lead.

In the first half: Logan Elm outgained the Chiefs 338 yards to 91. With Robinson accounting for 262 of the Braves yards.

The third quarter started with a bang for Logan. After a 18-yard kickoff return by Hunter Hill, Frasure hit a wide open Poling for 61 yards for Logan’s second score of the night and after the two-point conversion the Chiefs trailed the Braves 41-15.

The Braves first drive of the quarter start on their own 39 but the drive stalled on the Logan 24, when they failed make a first down on the fourth down play. On Logan’s second play from scrimmage, Logan Elm’s Evans intercepted Frasure’s pass at the mid-field strip.

After an incomplete Robinson pass, Reid ran for five-yards. Robinson hit Chalfin for six-yards then Sailor for 14 yards. Cole Westenbarger ran for four yards then caught a 17-yard pass from Robinson. Robinson ended the drive with his only rushing touchdown of the game making it 48-15.

Frasure hit Brandon Heft for a 50-yards pass to put Logan at Logan Elm 10. McCarty capped the drive with his second touchdown of the game to make the score 48-21.

For Logan offensive: Logan rushed for 69 total yards with McCarty carrying the ball nine time for 33 yards, Frasure added 18 yards on eight carries. Frasure threw for 162 yards on eight of 19 attempts, with one touchdown and two interceptions. Poling had two catches for 62 yards and a touchdown, McClelland had three grabs for 48 yards and Heft one for 50 yards.

The Braves counted for 532 yards of total offense on the night. Ried lead the rushing attack for the Braves with 84 yards on 16 carries and one touchdown, while Robinson carried the ball 13 times for 83 yards. Dyer added 20 yards on eight carries.

Logan will travel to Waktins Memorial week next while Logan Elm will go to Bloom-Carroll.