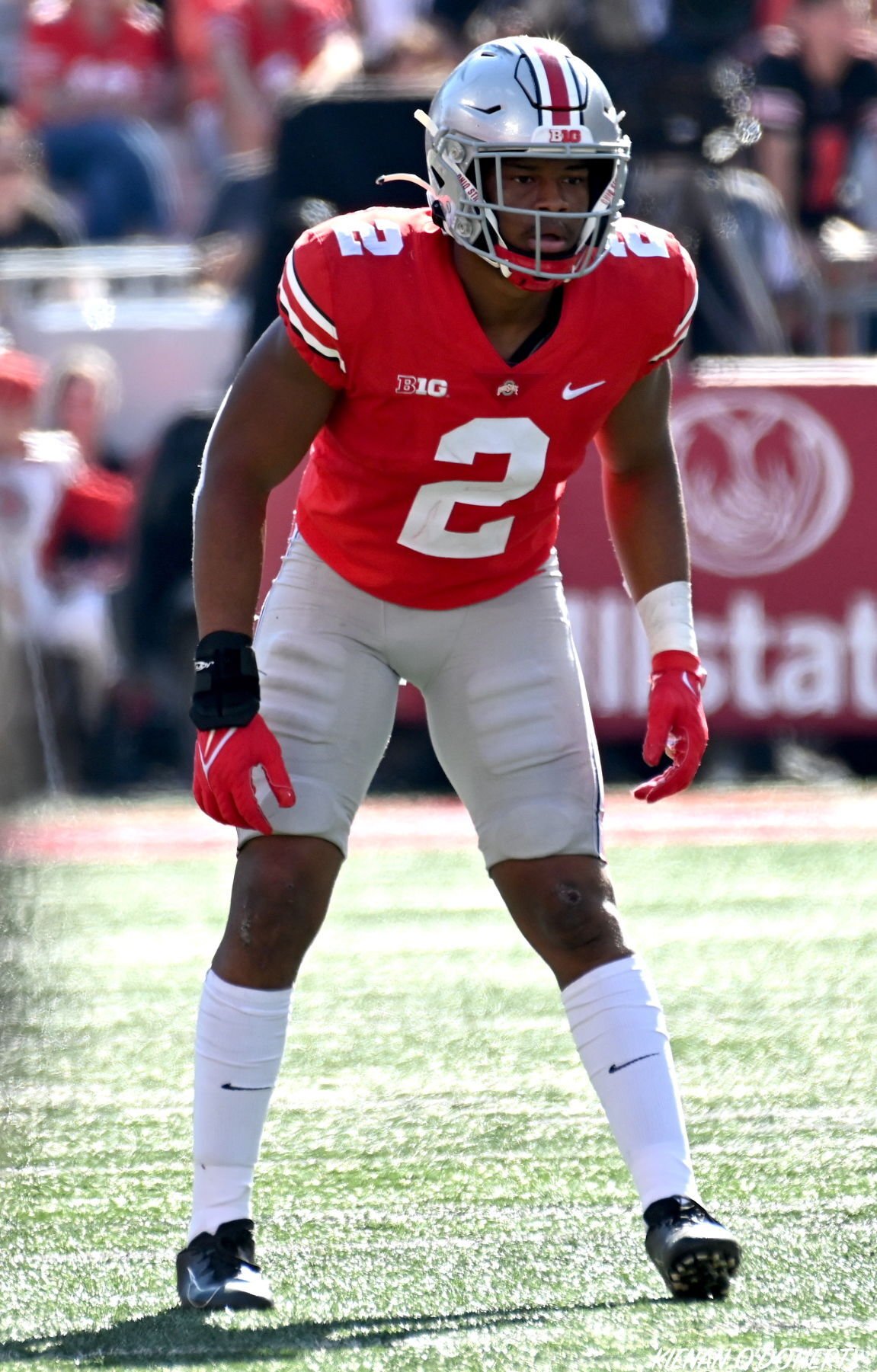 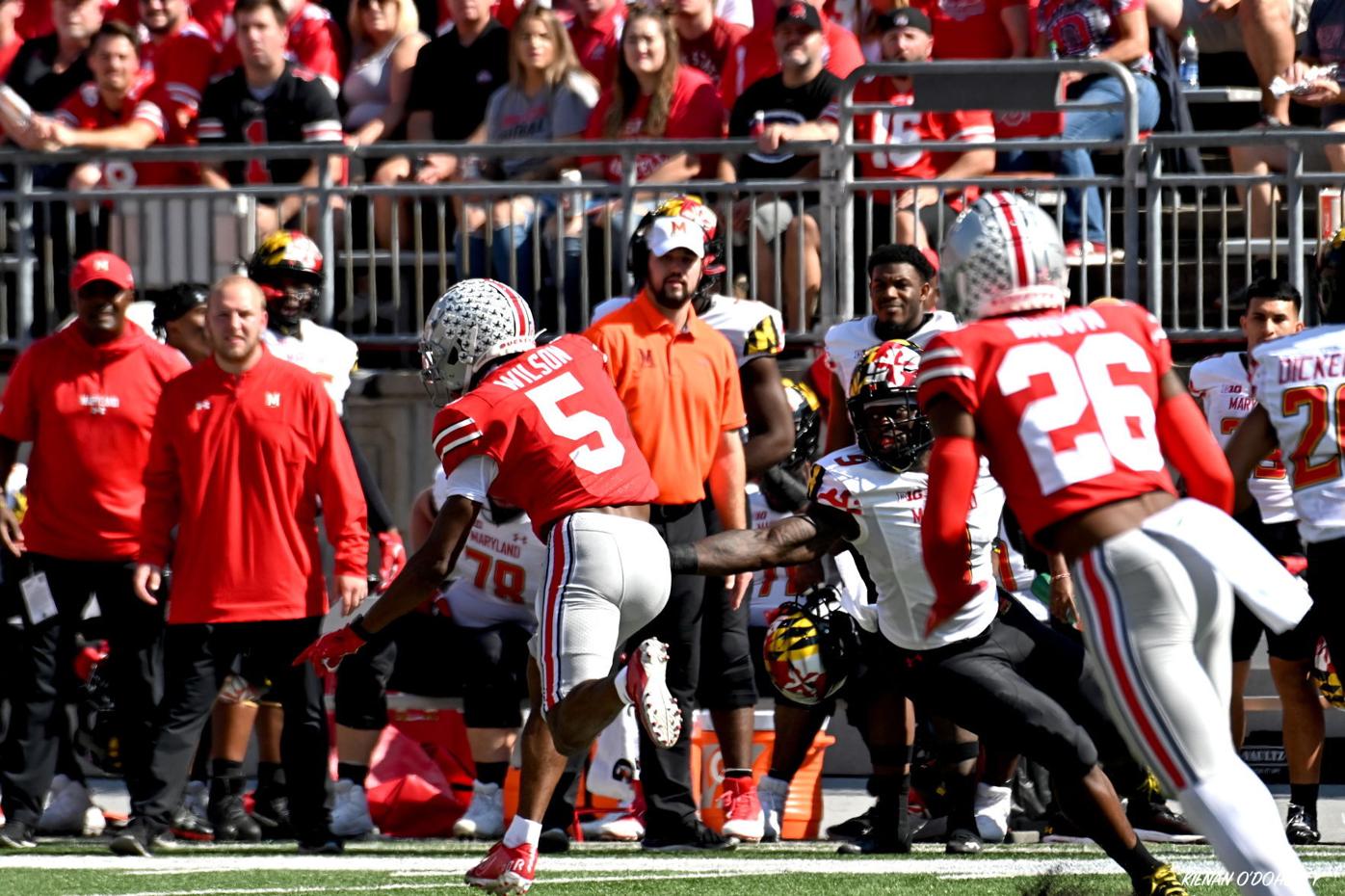 Garrett Wilson (5) evades a tackler after a catch.

Garrett Wilson (5) evades a tackler after a catch.

COLUMBUS, Ohio — C.J. Stroud, who didn’t throw a pass in a college football game until five weeks ago, says he’s getting better at relaxing amid the chaos.

With his sore shoulder feeling better and some early wobbles behind him, Stroud is beginning to look less like an inexperienced freshman and more like Justin Fields, his unflappable predecessor at quarterback who led Ohio State to the College Football Playoff in both years as a starter.

“I’m just being more comfortable,” Stroud said after throwing five touchdowns in the No. 7 Buckeyes’ 66-17 pounding of Maryland on Saturday. “I mean, being myself. I’m really just relaxing back there, and I think my teammates have really helped me. And I feel like we’re starting to roll, get momentum.”

Coach Ryan Day sees it, too.

“I think his preparation has been excellent,” Day said. “I think he sees the field well. He’s got some good players around him, but he’s also making really good throws. His timing is right, he’s seeing the field, making good decisions. And so that is allowing us to run the offense and to be very efficient.”

Stroud threw for 406 yards, including two touchdown passes each to star wideouts Chris Olave and Garrett Wilson against a depleted Maryland secondary.

“Last week and this week, we were damn near perfect,” Olave said.

Buckeyes freshman TreVeyon Henderson, after managing just 17 yards rushing in the first half, finished with 102 and two touchdowns. He also caught a 26-yard TD pass in the first half. Master Teague had a touchdown plunge as Ohio State beat Maryland for the seventh consecutive time.

It wasn’t until the Buckeyes’ 10th and final drive of the game, when the regulars were all out of the game, that the Terps managed to stop them on downs.

Ohio State “had guys look like they fell out of airplanes, they were so wide open,” Terps coach Mike Locksley said.

Tagovailoa, who came in the game leading the Big Ten in completion percentage, was 28 for 39 for 279 yards and two touchdowns for Maryland.

“I made some bad decisions,” he said.

Maryland: After reeling off three straight wins to start the season and Tagovailoa putting up big numbers, the Terps were full of confidence. That was until they ran into two straight Top-10 teams that showed Locksley’s squad that it still has a long way to go in the rugged Big Ten East.

Ohio State: Stroud has been spectacular the last few couple weeks, and the Buckeyes are picking up steam with each game. They have an open week before traveling to Indiana and hope to peak before a critical showdown with Penn State on Oct. 30.

Ohio State defensive coordinator Kerry Coombs, who was stripped of play-calling duties after his unit struggled early, was awarded a game ball Saturday, Day said. The defense limited Maryland to 4.5 yards per play and had five sacks.

Maryland: The Terps were without their leading receiver, Dontay Demus Jr., who suffered a season-ending knee injury last week. And then WR Jeshaun Jones went out with an injury on the second play of Saturday’s game and didn’t return. ... CBs Kenny Bennett and Jakorian Bennett also didn’t play.

Ohio State: DT Haskell Garrett limped off the field with an apparent leg injury in the third quarter. There was no update after the game. ... Miyan Williams, who started the season as the No. 1 running back, was listed as unavailable for the second straight week. Ohio State has not provided a reason.

Maryland: After a week off, the Terps host Minnesota.

Ohio State: The Buckeyes play at Indiana on Oct. 23.