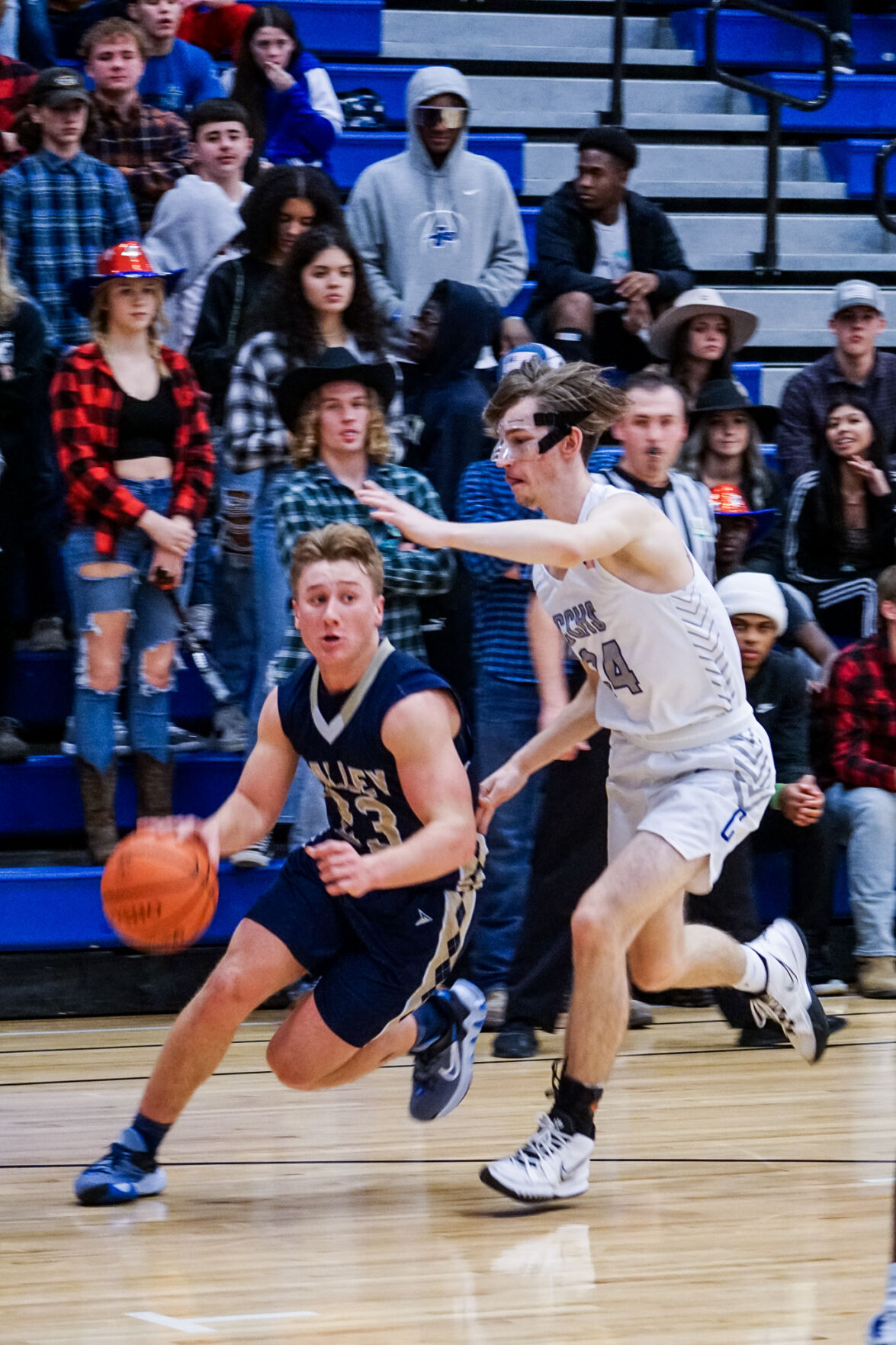 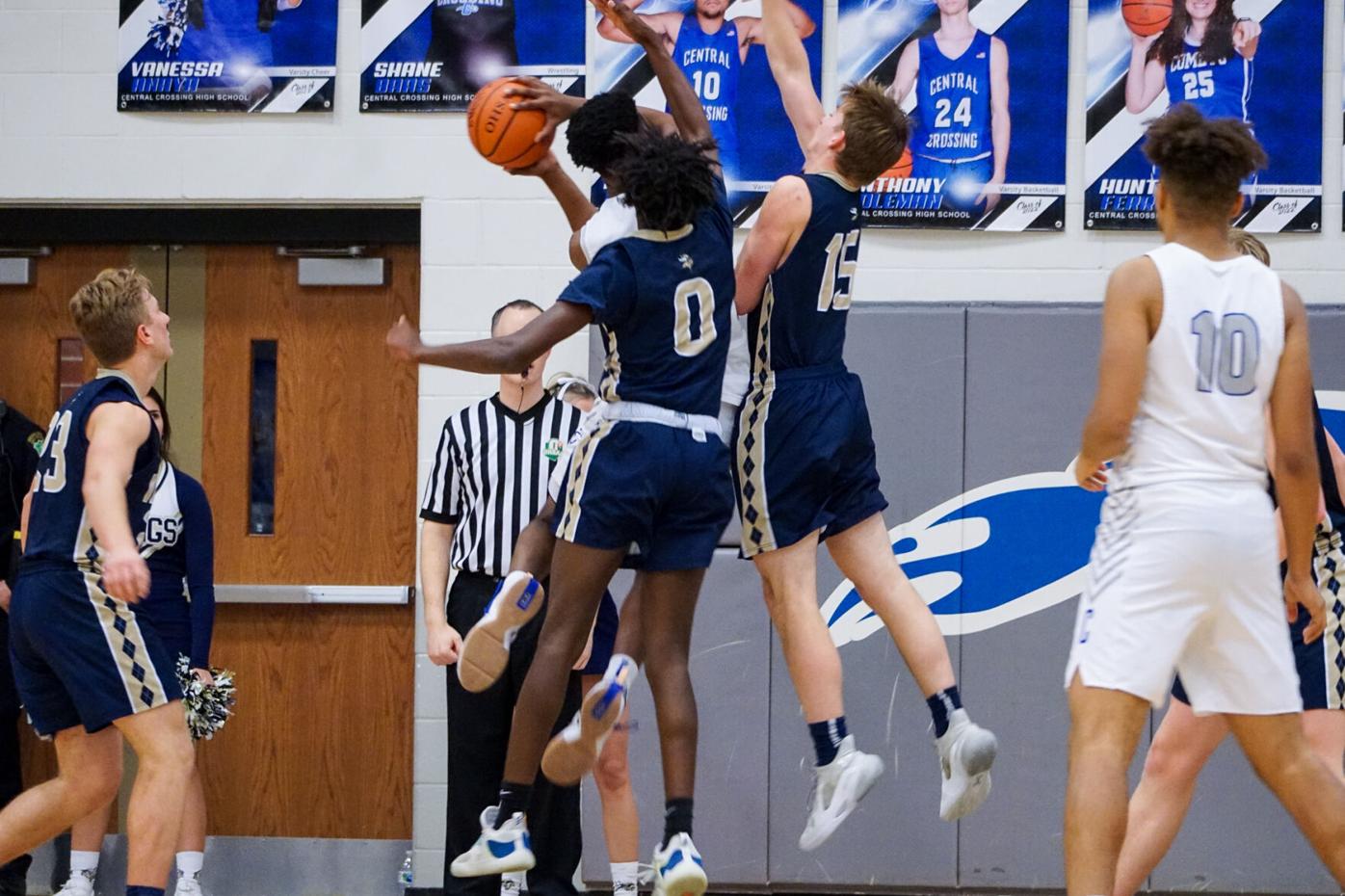 Senior Kevin Scott (No. 0) only had three points but excelled on defense

Senior Kevin Scott (No. 0) only had three points but excelled on defense

GROVE CITY— The Teays Valley boys’ basketball team has been busy. Three games in four days is a tough schedule for NBA players, but on Tuesday night the Vikings made it look easy.

In a hard fought game that required overtime Teays Valley came out on top over the Central Crossing Comets. The final score of 55-49 isn’t the whole story though.

Heading into the game against the Comets, the Vikings were in the middle of a tough stretch of games before Christmas. Teays Valley played Fairfield Union on Friday, in a tight game that ended in the Vikings favor, 56-55.

The team had a short rest on Sunday and then headed to Hilliard Bradley on Monday. The game against the Jaguars was everything short of a disaster for the Vikings, who had trouble sinking shots the whole game. Their defense also wasn’t holding up to the Jaguars onslaught and the game ended with the Vikings putting up a season-low 24 points.

Tuesday night, the Vikings needed to shake off their loss to Hilliard Bradley.

“Three games in four days has been a long road and it’s why we just tell [the team], ‘hey, keep after the grind, keep working hard and let things happen.” Head coach Brian Barnett said after Tuesday’s game.

What Coach Barnett and his staff said to the boys that morning seemed to work. At tipoff, the Vikings were calm and in charge.

Defensively, Teays Valley was focused and willing to adapt. The team started with a full-court press and as they took in Central Crossings’ playing style switched to a half-court press, and eventually settled into man-to-man coverage in front of the basket.

These in-game changes helped limit Central Crossing’s shots in the first and second quarters. After a second quarter that saw the Vikings make only four field goals, the solid defense allowed them to keep the lead at halftime, 25-23.

When the third quarter started it was like Central Crossing had switched from store brand to Energizer and the Vikings had trouble keeping up.

A little over three minutes into the third, Teays Valley lost the lead for the first time after the Comets sank a 3-pointer and brought the score to 29-28.

Perhaps that was the wake-up call the Vikings needed because a minute later Luke Sachs got the lead back with a field goal and a successful free throw.

The third quarter ended 34-33 in the Vikings’ favor and the crowd collectively shifted to the front of their seats.

The fourth quarter though, was not as explosive as anticipated. Neither team could put together a run and the whole quarter became a game of fouls, free throws and inbound passes.

As the clock ticked from minutes to seconds, the teams felt frenzied as it became clear the next basket might be the winner. With 3.2 seconds left and the score tied 43-43, the Vikings called a timeout as Central Crossing started to press.

It seemed Teays Valley were prepared to go to overtime.

The overtime period could be summed up with two words: foul trouble. The Comets played aggressively and sometimes aggressive play leads to your opponent at the free throw line.

Miller was perfect at the free throw line in regulation and overtime. Miller made 4-4 in regulation, and in just four minutes of overtime he doubled his numbers, ending the game 8-8 on the line and with 16 points total.

Overtime was dominated by the Vikings. Central Crossing didn’t make a basket until almost three minutes into the period and even adding another field goal and some free throws wasn’t enough to catch Teays Valley.

The Vikings won in a true team effort, the final score of 55-49 can’t be credited to any one player, or even just the players on the score sheet. The team played cohesively and took their defensive assignments just as seriously as they took their shots.

After the game, the team was on cloud nine. Unfortunately, the celebration can only be short lived.

The team is back on the court Thursday night to face Hamilton Township at home. Coach Barnett doesn’t want his team to lose the focus that has helped them so much this season.

“We just want to continue to get better. Each and every one of us individually gets better and then collectively, as a team we get better,” he said after the win.

“Our offense can still improve. And our defensive rebounding has got to be better. That’s been a focus of ours for the last two or three games now and tonight it really paid off for us. I think as we go forward, our defensive pressure, our man-to-man stuff and our rebounding is going to be the thing that we hang our hat on.”